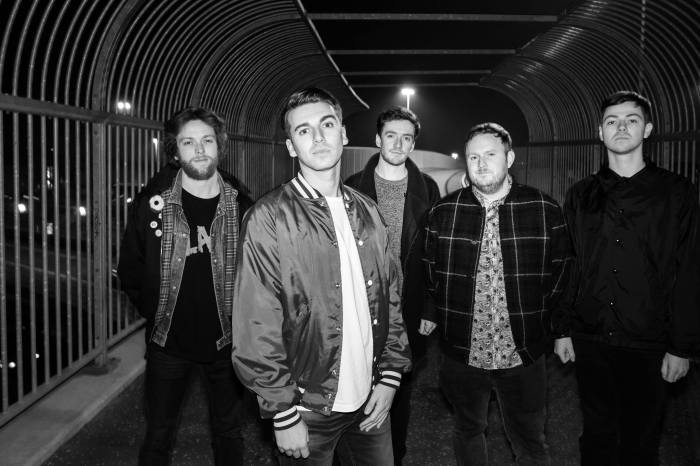 Tagged as Scotland’s biggest independent band, there is no doubting that anticipation for The LaFontaines’ debut album has been in full swing on the back of acclaimed releases and a live presence seeing the band headline shows in New York, tour the UK and Europe with Watsky, and play their biggest headline sold out show to date at Glasgow’s ABC amongst numerous successes. The majority of that happened in a triumphant 2014 for the band but it is easy to expect bigger, more forceful spotlights upon the band in this with the release of the thrilling and fascinating Class.

Formed in 2010, the Motherwell hailing quintet first snatched attention with the All She Knows EP in 2013, following its success the following year with the similarly eagerly received Under The Storm EP. The absorbing diversity and sounds of the Matt O’Grady (You Me At Six/Don Broco) produced Class now blends the qualities of those previous releases with a new adventure of invention and enterprise. It is at times a startling release, persistently a striking one, and even when its persuasive energy slips a touch, album and indeed band just enthral as they brew up an impassioned and tenacious incitement. The words of frontman Kerr Okan probably describes it best when he says, “We’ve spent the past 3 to 4 years leading up to this point. Everything we’ve seen on the road or experienced together as a band has finally made its way onto record. It’s guaranteed to shock those who assume we’re simply just the best live band in Scotland. There’s so much depth to these songs, a load of pain and struggle, but underlying throughout all of the writing, is some real grit and determination.”

There can be few albums this year with as rousing a start as Class offers through Slow Elvis. From a distance the song looms on ears, hitting them on arrival with pungent anthemic rhythms and fiery riffs. It is not particularly aggressive or explosive yet within seconds the opener has ears and appetite seriously aroused and hanging onto its swing. Spatial sonic endeavour fills air quickly too, surrounding the swaggering vocal rap of Okan as bass and drums intensify their bait with a snarl and punchy attitude. Additional vocal calls and melodic revelry only adds to the incendiary brew, the track evolving into a Rage Against The Machine meets Lazy Habits encounter wrapped in the sultry hues of Muse.

The sensational start is quickly backed by the similarly electrifying Under The Storm, a burst of guitar sparking handclaps and melodic vocals with fire in their breath. The track is soon shrugging off any restraint and with sinews flexing, it strides resourcefully through ears behind scythes of guitar and bass which in turn are led by the stirring mix of clean and rap cast vocals from bassist John Gerard and Okan respectively. Though openly unique compared to its predecessor, that description of references again applies, and like the first song is twisted into something unique to The LaFontaines. Unpredictability also is a ripe asset to both songs, and indeed the album, that and the great Scottish lilt fuelling the jabbing potency of the rapping.

The album’s title track comes next, a gentle caress of melodic temptation crooning over the senses as rhythms fling their enticement around in a robust dance. Once more the mix of vocals is a magnetic tempting in the indie seeded and lively serenade of the song, the melodic lure of Gerard as potent as the creative jangle of guitar from Iain Findlay and Darren McCaughey. Revealing more of the depth and imagination in the band’s songwriting and sound alone, it is replaced and emulated by Castles. This too has a reserved touch yet its heart is a blaze of sonic expression and evocative intensity. A sizzling start slips into a mellower embrace around Okan’s delivery, both taking ears and thoughts by the hand and leading them into new eruptions of emotional drama. Without quite matching the plateau of the first few tracks, the song easily steals full attention with its Biffy Clyro meets The Kennedy Soundtrack like canvas evolved into something distinct to this new breed of Scottish rock ‘n roll.

King steps up next, its great bluesy guitar twang an immediate tasty enticing to which a throaty bass groan from Gerard and the punchy spits of Okan bring their own irresistible tempting. Featuring guests Luke Prebble and Michael Sparks, the song whilst wrapped in the tangy keys of McCaughey and vocal harmonies prowls rhythmically and emotionally. Gospel like in ambience, mischievous in imagination, the track has ears and appetite hungry, their need fulfilled by Junior Dragon. Not for the first or last time, drummer Jamie Keenan stirs up body and emotions with his skilled incitement from which the song exposes an even grittier and volatile side to the band’s sound. Arctic Monkeys like in devilry, Freeze The Atlantic like in energy, and Able Archer like in creative grandeur, the track grows into a rich bellow of voice and sound for another major highlight of Class.

A fiercely shimmering persuasion comes with All Gone next, another with a predacious edge to its rhythms and character backed by a great rapping stroll from Okan but maybe for the only time on the album a strong impact slips as the melodic and harmonic side of the song flows. Nevertheless the track captivates and solidly pleases if without finding the spark which ignited earlier songs, an ingredient the outstanding Window Seat has in strength. A more smouldering persuasion, it takes time to reveal all its rich levels and qualities but over time becomes a mighty peak of the album. It is an intense slice of emotional balladry built on a muscular frame, this draped in quite superb and mesmeric vocal strengths. It might be ballad like but there is a tempest at its heart which makes the song a volcanic croon and just irresistible.

Enjoyable but less dramatically engrossing is All She Knows, an easy going and arguably formula song in respect to the band’s songwriting. It is relatively unique to outside references but finds it difficult to stand out in the richness around it, though again to be fair the track is only enjoyment for ears, something which again applies to Paper Chase. Its eighties indie pop essences definitely add something fresh but once more the track struggles to linger like the insatiable successes elsewhere upon Class.

The album closes with the thick and shadow enriched caress of Pull Me Back, keys a melancholic but dramatic expression against the anthemic beats of McCaughey. They are a mere moment in the ever evolving landscape of the excellent song of course, every second, note, and syllable from across the band just inventive theatre.

It is a fine end to a thoroughly exciting release. Certainly there are moments when Class slips from its loftiest perch but it is generally down to the brilliance of some songs in comparison than the failures of others. As suggested, the first album from The LaFontaines has been long and greedily awaited and now here it undoubtedly lets no one down.

Class is available now via 889 Records from most online stores