Predictability has never had a presence in the sounds and imagination of Canadian noise wreckers KEN mode, though that in itself is something to be expected. Their caustic and furious brews of post-rock, hardcore, metal, and noise, to mention just some of their flavours employed, have ignited ears and imaginations with a tempestuous almost petulant creativity ensuring the band’s propositions are some of the most persistently and highly anticipated treats. The Winnipeg trio’s new album Success is no exception but this time it has taken a detour which definitely takes assumptions by surprise.

The band has gone back to explore the sounds and invention which were fermenting and fuelling the late 80s/early 90s when KEN mode began to sow its own sonic explorations. The album’s press release lists the album as paying homage to “both their Canadian Prairie roots, and a time when they first started to care about making music; the burgeoning grunge; and Touch Go/Dischord scenes of, with bands like Nirvana, Big Black, Cop Shoot Cop, The Cows, Circus Lupus, and Drive Like Jehu warping their teenage minds.” Listening to Success though you can go back further and find the seeds in predominantly post and noise punk with the album persistently sounding like a primal version of Gang of 4 on steroids. It is the band as raw and aggressive as ever, probably even more so at times, and still lyrically stirring up thoughts and emotional involvement, but it shows a new character and new compelling designs from the band which might not quite work for all but here is being greedily devoured. 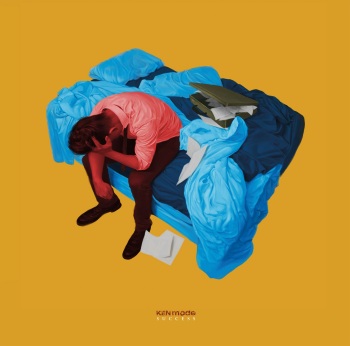 Recorded with Steve Albini (Nirvana, the Jesus Lizard, PJ Harvey) and recorded as a fully live and analog session, KEN mode’s sixth album opens with Blessed, a track which from its initial sonic whistle turns into a heavy bestial prowl. Simultaneously a swagger emerges in the grizzly tones of Scott Hamilton’s bass as magnetic jabbing lines the beats of drummer Shane Matthewson. Intimidating restraint replaces their predacious aggression at this point, the vocals of guitarist Jesse Matthewson crawling syllable by syllable with open ire over the addiction igniting web now in place. The song’s volatile instincts soon return to take rein though, almost insidious discord and hostility invading whilst binding excited senses in inventive and mischievous rancor.

The outstanding start kicks up another notch with These Tight Jeans, a song which roars and excites like an illicit union of Nirvana, Black Flag, and Pretty Girls Make Graves. Of course that is a mere hint to something unique to KEN mode, the track a rumbling, grumbling contagion of wiry hooks, spicy grooves, and rhythmic badgering. As ever the song is driven by fury loaded vocals but this time assisted by the excellent punk lures of guest Jill Clapham who just adds richer colour to the slimline unbridled furnace on the senses.

The Owl… follows the brilliance of its predecessor with its own gripping dark beauty. A sinister noir lit intrigue escapes the growling bass groove, its drama escorted by the similarly potent landing of drum sticks as vocals dangle their raw tone and narrative over the imagination. An air of Bauhaus wraps the absorbing lure and agitated swing of the song as guitars and bass spring an inescapable menace of a flirtation which only gets darker and more imposing as the emotive intimacy of cello from Natanielle Felicitas returns after first gracing the opener. The solemn gentle passage hugging her enterprise is soon a brawl of noise and intensity again before regaining control in a mesmeric finale which leaves ears and emotions in lustful bliss

The grungy turmoil of I Just Liked Fire explodes next, it too a rebellious blaze for ears and appetite to get lustful over as twisted discord and carnal noise collude to abrase and infest the senses whilst its successor Management Control, with greater restraint crowds ears with a thick resonating bassline and a tangy vining of guitar endeavour. The beats of Shane once again provide disorientating yet anthemic bait aligned to the predatory and contagious groans of bass but sonically the song is more involved and less instant with its catchy hooks and grooves. This is not to say the track is any less virulent than the previous songs, just a more intensive exploration with layers of waiting rewards.

There is a feel of Psychic TV to the following A Passive Disaster as its carnivorous basslines and caustic bellow gets right under the skin and into the psyche whilst Failing At Fun Since 1981 straight after, is punk belligerence at its blisteringly sonic and primitively rhythmic best. Both songs are a jungle of menace and bracing invention, individual noise riots to thrill and linger though they get outshone a touch by A Catalog Of Small Disappointments and in turn closing song Dead Actors. The first of the final pair is an uncompromising persuasion, its stalking rhythms and vocal angst entwined in the rabid theatre of guitar and lyrics. The track enslaves body and emptions with ease, threatening and seducing with every snarl and raw fingering of the senses before its successor takes over with a psychotic and darkly elegant Gang of 4 meets Wire like meander of sound and distress lined emotional reflection. The song is spellbinding, a long term journey taking itself and the listener on a traumatic and turbulently fascinating adventure.

It is hard to say yet if Success is KEN mode’s finest hour such its big enough departure to previous encounters reveals something openly and strikingly different but the seriously thrilling encounter is definitely a contender.