Tom Brumpton is a well-known and respected vocalist/musician primarily through his time with UK progressive/technical metallers Akarusa Yami and his PR work and support with Polymath. He is also an adventurously talented film director and is poised to step behind the camera for his new project The Guiding Light. Tom has kindly given us some of his time to talk about his new film sharing the background to its inception and creation, his previous work in music and film and how to get involved in the crowd funding campaign for a proposition which is already stirring imaginations and excitement alike.

Hi Tom, our big thanks for taking time out to talk with us.

You have just launched a crowd funding campaign for your new project The Guiding Light. A great many of us will know you for your musical prowess especially as co –founder and former vocalist of Akarusa Yami and as promoter of a great many artists. The Guiding Light is a short film you are directing. Before we talk about the film, how did you first get into film making?

Thanks for the kind words, dude. The first film I directed was The Samaritan in 2015. Adam Luff, our screenwriter, and I did everything on that. It was a little mad. From there, we shot a few other bits, including a short film called Nurture of The Beast in 2016. It got picked up by a dozen film festivals and won a few awards. Our success on that laid the groundwork and gave us the confidence to make The Guiding Light.

You mentioned the new film was written by Adam Luff. Tell us a bit about Adam.

As I mentioned, Adam and I have done three short films together now. This is our fourth time working together. Adam is my best friend. We’ve known each other since we were three years old, and we’re both 32 now. He’s an award-winning screenwriter who spent time studying screenwriting in San Francisco and he’s currently working on a few projects with production companies around the world. He’s a very talented guy

That previous project together, Nurture of the Beast, received a handful of award nominations; this included one for Best Actor for you. Are you appearing in The Guiding Light as well as directing it?

I might be in the movie *laughs*! I will leave it at that. My main focus on this is that of director and producer. We talked about me being having a role in the film but felt that with everything else going on it made more sense to focus on things behind the camera.

Who is appearing in the film?

Our lead actresses are Jessica Messenger, who plays Barbara. She’s a Derby based actress and dancer who’s done a ton of great films, including Rats with Lawrence Harvey (Human Centipede 2) and Nicolas Vince (Hellraiser). We also have Martina Lopez as Angela. As soon as we saw her showreel we knew she was perfect for the role. We also have a few other amazing actors and actresses in voiceover roles, but we’re still finalising those right now.

Can you give us some insight into The Guiding Light; its story inside and outside of the film and the seeds to its invention?

Outside of the film, a big influence on the film was the death of my aunt Pat in April 2016. I spent a year coming to terms with that before speaking with Adam about making a new film, which became The Guiding Light. While we were prepping The Guiding Light another aunt of my mine, Kath, passed away. I lost a few more people I knew passed away through 2017. As time passed, it just made me more resolute to make the film and put a very dark chapter to bed.

The plot of the film follows Barbara, a world champion dancer living with auto-immune disease. Following her retirement she’s struck down by an aggressive case of pneumonia and left on the verge of death. It is here, guided by her sister Angela, that she begins reliving her happiest days before facing her pending mortality

We started talking about the movie in May 2017 shortly after coming back from the Cannes Film Festival. The whole experience was really eye opening and inspiring, and it made us stop and decide to make another film. I was getting into a better place emotionally after Pat’s death, and I felt more capable of dealing with the topic.

Obviously having worked with Adam a lot you truly know and understand his writing but how did the two of you approach and come together in thought to a story rising from such intimate experiences?

I think it comes from knowing and living with each other for so long. We’ve been friends most of our lives, and there’s an understanding there. When we sat down to start fleshing the idea out, it was a pretty easy experience. We went to a bar, grabbed some coffees and got to work. The whole thing came together very quickly, which was wonderful. Adam knew all about what had been going on with my family, and knowing me, he knew how to navigate the situation. I don’t think it would’ve been possible to do this if that understanding wasn’t there.

What has inspired the look and tone you are giving the film and indeed your directing style? 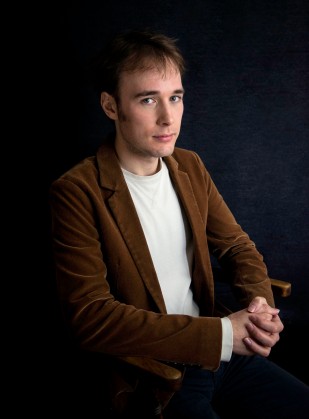 The two films I keep coming back to are The Neon Demon and La La Land. La La Land’s big sprawling dance numbers are epic, beautiful and full of life while The Neon Demon is visually stunning, with incredible lighting and music, but its haunting. I’m aiming for The Guiding Light to sit somewhere between the two in terms of tone, visuals and spectacle.

Previous films you have co-directed, The Guiding Light your first one alone? Has that brought any particular difficulties or indeed given you a freedom?

This is my first time directing a short film solo, yes. It’s been a massive learning curve, but I’ve enjoyed it a lot. There are always ups and downs on stuff like this, but I’m glad I’ve tackled it and I’m very glad I’ve had such a great support network around me. It wouldn’t be possible otherwise.

We mentioned Akarusa Yami earlier. I assume there are a great many differences between making films and music but are there any similarities which your previous adventures have helped with?

I’ve described filmmaking as like making six albums all at once. I think the biggest comparison is that it’s a great big collaboration. While on most albums I’ve done had a dozen people involved, maximum, we’re looking at a cast and crew of around 40 people on this. It’s much bigger than making an album, but at its core the rule is always the same; hear people out, have a clear vision and do your best.

Are you also involved with the soundtrack of The Guiding Light?

I have left that in the hands of a far more capable man *laughs*! Our composer, Alex Norman, is an amazing songwriter and his work has been used by Marvel Studios, Universal Pictures, 20th Century Fox and beyond. What we’re going for is a really big blend. There’s ambient music, drone music, soul music, beach pop and stadium ballads going on. If done right, it’ll be a really interesting mix. I can’t wait to see what Alex does.

How deep into the process of making the film are you?

We’re coming to the end of pre-production now and we’re set to start filming on September 23rd. I’m nervous, excited and cannot wait to get on set. There’s still a ton of work to do, and I imagine we’ll be working on things right up until the day of shooting. That being said, we have a wonderful cast and crew, and everyone so far has been very supportive.

You have launched a crowd funding campaign as we mentioned, would you give us the details for that?

Absolutely, you can find everything on the campaign at the link below! We’ve got a bunch of cool perks available, including badges, posters, tickets to VIP screenings, links to the film and the soundtrack!

Do you have a date for the release of The Guiding Light scheduled and once out where will people first be able to see it?

We don’t have a release date as of yet, no. The plan is to arrange a premiere at a big European festival, but I don’t want to say too much until everything is confirmed. Once that’s done, it’s on to the festival circuit. The difference between the music industry, where usually singles and records drop a few months after they’re finished, a film will usually go on to do the festival circuit, which it can do for a year or two before it gets a proper release. It’s not uncommon for a film made in 2015 not to see the light of day until 2018, as an example.

Before we part can we briefly talk about your musical side? Firstly what sparked your departure not only from Akarusa Yami but pretty much from being a visual presence making music?

Sure! In all honesty, I just wasn’t enjoying being on stage anymore. It wasn’t fun for me. I loved the guys, and I loved the adventure, but my heart wasn’t in it. I’m a firm believer that if you’re not enjoying being up on stage then you should quit. Once I finished with Akarusa Yami, every time I considered making music again I felt kind of numb. I didn’t feel excited to pick up a guitar or a microphone or write lyrics or anything. The plan was always to wrap things up with the band after my last show with them in Trondheim, Norway in October 2015 and move in to filmmaking.

I heard a rumour though that you have briefly linked up with former band mate Tom Clarke on his new project?

Yeah, Tom asked me to sing on a track a while ago. I don’t know if what I did will make the final cut, but I’m proud of what we did and whether I’m on the album or not, I’m sure it’ll be great. He’s super psyched about the album, and he should be. It’s a great record.

The first of a few new adventures back in music aside from your great PR work or is film where your creative destiny is?

I’m still running Polymath (PR) and will be for the foreseeable future. A new band isn’t on the table, really. I like doing the odd song with bands here and there, that’s fun. But a full band takes a lot of time and commitment, and in all of this it’s made me think long and hard about where I want to go career wise and directing is definitely what I want to do. This has been a great experience.

Once again Tom big thanks for chatting with us. Any last words you would like to leave us?

Thanks so much for your time, and a big thank you to everyone who’s donated, shared and contributed to the film so far. It means the world to us.

Watch a teaser for the film @ https://www.youtube.com/watch?v=mDmA4WFmWuA&feature=youtu.be and check out the crowd funding campaign via Indiegogo @ https://www.indiegogo.com/projects/the-guiding-light-short-film-women-horror/x/18779834#/