With every song and single released, UK duo Vienna Ditto has enhanced the seductive hex they have laid on certainly our ears since being infected by the band’s Ugly EP in 2013. Now the pairing of Hatty Taylor and Nigel Firth has set free their long awaited and highly anticipated debut album, and fair to say that their melodic voodoo has just got seriously enslaving. Bringing some old fan favourites together with re-workings of older releases and brand new slices of sonic devilment, Circle is a bewitching romance of sultry atmospheres, bordering on sinister melodic beauty, and psychedelic sunspots of harmonic alchemy.

Originally meeting when Firth taught Taylor the guitar when she was 11 years old, the duo began writing and creating together in 2009 after meeting by chance again in the street. Within a week of that moment, they recorded an electronic version of the Johnny Cash classic Ring of Fire and in a matter of another seven of so days created and unveiled their own first song Long Way Down. This quickly managed to find itself played on Huw Stephens’ Radio One show, leading to Vienna Ditto playing the BBC Introducing stage at Glastonbury. 2011 saw the band’s self-titled debut EP get a well-received release, its temptation the beginning to greater attention and responses earned by a couple of singles and more so the Liar Liar and Ugly EPs two years later. With further singles only enhancing and confirming the duo’s potent emergence and increasing evolution of sound, there has been a greedy appetite brewing amongst a great many for this first album. Now here it is easy to say that no-one will be disappointed and for newcomers, well simply welcome to a new musical lust.

The encounter opens with This Is Normal, a song instantly luring ears through a minimal but potent bassy riff and the siren-esque tones and expression of Taylor’s voice. As crispy beats and additional guitar enticing joins the mix so the song’s energy also elevates, though it is quickly back into the low key gait so things continue to be potently intriguing and unpredictable. As electronic invention springs its bait next, the track eventually slips into a magnetic stroll with Morningwood like revelry but yet again things only get twisted and turned around to relentlessly excite ears and imagination. 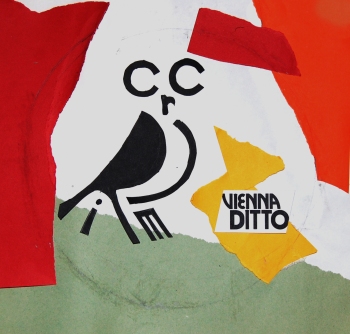 The irresistible start is emulated and surpassed by the following Feeling Good. With garage rock hooks colluding with surf and sci-fi shimmers, the song is quickly teasing and flirting like a sixties Venusian temptress. Also though there is simultaneously a climatic and sultry air enveloping the senses whilst beneath it a smouldering Tarantino cultured landscape becomes the home for an irresistible dance of vocals and grooves. The song is pure musical and emotional drama, an infection getting under the skin and into the psyche whilst providing the first major pinnacle of the album.

A melodic calm caresses ears next through the mellow charm of Wintertime. Comparisons to Portishead have been a regular offering since Vienna Ditto began and easy to see why with the golden kiss of charm offered by the tantalising third song on the album. It has its own intimacy and individual, almost raw innocence and beauty though as it casts a lingering peace which eventually makes way for the off kilter cosmopolitan enticement of A Happy Car is a Stolen Car. With a ska shaped bassline and exotic melodic hues within a spatial atmosphere, the song is a fascinating waltz of warped imagination and enterprise. The effect hugged vocals of Taylor court the bedlamic shuffle of the song and again a sixties pop hued psyche rock twisted soundscape. It takes a couple of listens or so to fully explore and understand the wonderful turbulence of ideas and bold adventure at work but rewards patience with another major highlight within Circle.

The band takes ears back into the dusty climes of a Morricone like terrain next through Pale Horse Rider, voice and strained guitar strings a compelling lead into a continually evolving and absorbing immersion of sound and emotion. Beauty again is the keenest description to lie at its door before the first of the band’s two current singles step forward side by side. Oh Josephine which we are led to believe is a tribute to dancer and civil rights icon Josephine Baker, has a haunting and pulsating shine to its air, a glow which resonates across every aspect as rhythms and the simply catchiness of the song steal body swerves and lustful thoughts from the listener. The following Long Way Down is an epidemic of addictiveness and brilliance. Primarily garage punk and rock across its numerous strands of temptation, the song also weaves a funk and synth pop lure encased in psychedelic salaciousness. Think Chick Quest meets MGMT with a touch of Jingo for good measure and you have a closer clue to the brilliance of the song.

Both the hypnotic almost oppressive psychedelic wash of A Wheel Within a Wheel and the bulging devilry of Hold On enthral and thrill; the first a song bordering on psychotic with its kaleidoscope of sonic colour and melodic seducing aligned to off the wall ingenuity. The second of the two is jazz/funk pop twisted out of shape and stretched on muscular rhythmic sinews, then infused with guitar jangles and electronic mania before being given to Taylor to bind in her ever alluring vocals. The result is one virulent dance of unbridled infection and enjoyment though it is soon overshadowed by the sensational Hammer and a Nail. Opening with a caress of southern guitar and the endearing tones of Taylor, the song soon spreads into again Morricone seeded scenery within a dusty hot ambience. It is a transfixing maelstrom of mystique kissed sounds and emotional drama which toys with ears and imagination. The more revealed the darker the track becomes, its rapacious throat and intensity an encroaching clouding over the open beauty and sultry resonance of voice and melodies. As a single this incitement was glorious but reshaped and re-coloured for the album it is simply majestic.

The gentle croon of Liar Liar Quietly is almost an anti-climax initially after the previous glory but soon has ears and thoughts firmly in its soft and persuasive melody soaked hands. It is a spellbinding kiss with a need to spill eighties post punk like invention from within its serenade, again the band reaping seeds from earlier decades to enrich their own scintillating invention.

The album closes with a smouldering slice of gospel bred psyche balladry; I Know His Blood Will Make Me Whole another cast in the dark country of psychedelic rock ‘n’ roll. As expected the track spins a mesh of perpetual unpredictability and off beat exploration which just gets darker, bolder, and more addictive with time and age.

There is also a bonus track on certainly the digital version of Circle called Squeaking Wheel and it too is a sensational romp, one built on a blues sound and craft wound in creative mischief and ingenuity. Whether this or I Know His Blood Will Make Me Whole completes the album, Circle is easily one of the most scintillating and invigorating thrills of the year so far. Full of surprises and originality, album and Vienna Ditto deserve all your attention with the only losers being those not taking a listen.