Glorious is the only word for Agony, the debut album from UK synth pop duo Practical Lovers. It might be soaked in melancholy, be the outpouring of frustration and torment bred by lost and unrequited love, but the album is simply a majestic tapestry of skilfully cultured shadows and the beauty lying within all emotions.

The band is the union of singer songwriter Jack Wiles and his long-term musical partner Mark Connell. Originally it was intended as a solo project for Wiles with a collection of songs written “in an attempt to vent some of his frustrations with love in the 21st Century.” After introducing the idea and songs to Connell, the pair creatively united and stepped forwards as Practical Lovers, this around late 2010. The band signed with Nottingham based label I’m Not From London Records the following year, releasing a couple of singles over the next three whilst earning a rich reputation for their live performances. Now they unveil their eagerly awaited debut album, a stirring incitement of vintage synths and analogue drum machines bound in nostalgic radiance, heavy and seductive emotions, and compelling enterprise. 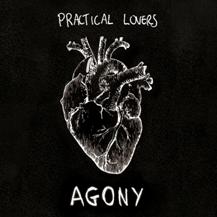 Every track within Agony is a love song; the dark side of and fallout from inspired explorations for sure, but all seeded in love. They come with an intimacy which feels like they are echoes of their creator’s heart and experiences and makes it easy to emotionally connect with, whilst each is presented within sounds which are as infectious and hopeful as they are similarly solemn to their lyrical pleas. From the opener band and release has ears and imagination chained, and emotions basking in the pleasure given.

Put It Bluntly tempts ears with a few dark pulses of synths whilst brewing a more feisty lure in the background, that swiftly coming forward and blossoming on the strains of a deliciously grouchy bassline. The inescapable enticement of Wiles’ wonderful dour lined and magnetic tones soon adds another rich texture and hue to the already invasively infectious encounter. That element of nostalgia is often eighties spawned and here on offer is a Paul Haig meets New Order coaxing with a touch of Interpol to it, a mixture only adding to the thrilling virulence of the song.

The following Never Again brings some fiery guitar to ears, the fizzy texture invitingly colluding with poppy synths as Wiles and Connell avail an already greedy appetite of their individual prowess. The fevered stroll does not hang around, offering a bubbly simmer over two minutes of inimitable bait before Inside Job provides another diverse and fiercely captivating string to the bow of Agony. Like The The in league with The Smiths, with Wiles vocally as throughout the album creating a vocal presence somewhere between Morrissey and Ian Curtis, the song is a plaintive serenade, a vibrant croon which whips up ears and emotion within seconds and increasingly involves the listener with every passing second.

A similar hue glows within Full of You next, though the track again reveals a distinct character of its own as synths smoulder and caress with emotive expression. The mix of vocals, presumably from the two artists, adds another riveting texture, though it is Wiles and the Smiths blessed earthy elegance that seals the deal between lustful ears and song, an ardour just as eagerly given to the Joy Division coated Nobody There which follows and straight after that the post punk scented brilliance of The Work Around. Hints of Blancmange and Orchestral Manoeuvres in the Dark emerge from within the outstanding track, and in many ways, having seen OMD live in their first days, there is a definite resemblance between the bands if not exactly in overall sound.

No Reply slips into the dark corners of its emotive heart next, that Joy Division suggestion again an easy offer as the track morosely yet enticingly prowls ears before its big success is eclipsed by the skittish energy and devilry of Restless. Think Fad Gadget meets early The Correspondents with Editors in tow and a clue to its irresistible endeavour is close to the mark whilst for Textbook Romance maybe John Foxx era Ultravox and early Cure is a good hint. To be honest, for all the references sparked, each track is a thrilling proposal unique to Practical Lovers, just enhanced by a great weave of recognisable colours, whilst the second of this pair also unveil its warm party on the senses with a hopefulness arguably not explored as fully elsewhere.

The album closes off with firstly the insatiable contagion of Falling Down and finally the melancholic serenade of Grave of Romance, a song impressing initially and just seducing the passions to greater effect over time. Both also provide another aspect to the multi-faceted sound of Agony, an album which is blossomed from some of the harshest and deepest felt emotions possible but is anything but agony to listen to.

Practical Lovers is one of the finds for our ears of 2015 and Agony one of its most thrilling and invigorating releases.

Agony is released November 27th digitally and on limited edition cassette tape through I’m Not From London Records @ https://itunes.apple.com/gb/album/agony/id1051440048