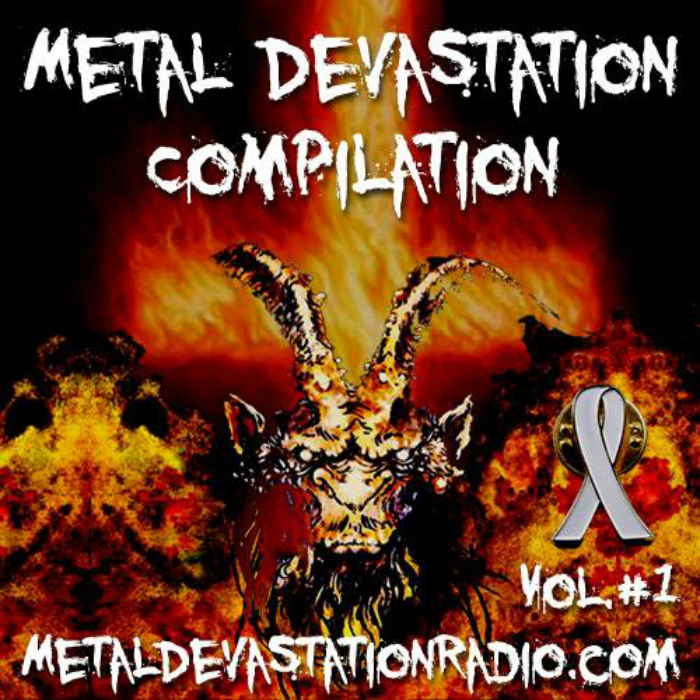 Put together and unleashed by Zach Moonshine and Metal Devastation Radio, Metal Devastation Compilation Vol. #1 offers two mighty reasons all metal/rock fans should go check it out and treat themselves. Firstly it was created to raise funds for those battling cancer and to help the families involved, which sadly includes Zach’s own mother-in-law who was recently diagnosed with stage 3a large cell squamous carcinoma of the lung that has spread to her lymph node. With all involvement from the album creators to artists purely voluntary and all proceeds going to the cause, the compilation is very worthy of attention and add the second mighty lure in the fine horde of independent bands, 39 of them, offering their support and sounds, the album is a no-brainer involvement for all.

Within its first handful of tracks the quality and diversity of artists and sound is gripping, a trend never deviating until the final triumph offered by one man Canadian death-grinders Pink Carnage and their glorious trespass of ears and psyche going by the name of Children Of The Damned. The track is a brilliant conclusion to a release which starts off in riveting style too, that variety of temptation springing from opener We Will All Be Trees by Ottawa death metallers …From The Deep. Its ravenous stalking and infestation of the senses makes way for the raw metal of Cape Town quintet Nethercyst and in turn the grooved punk metal of 94 Blades and after the Arizona outfit, the dark invasive black metal courtesy of Iranian band Akvan. The four tracks epitomise the strength and diversity of the album and indeed global underground scene, but still just the tip of the creative iceberg.

It would make War and Peace look like a novella to make a comment on every single song within the album in this review so allow us the indulgence of revealing particular favourites, a choice hard enough in all honesty such, without exception, the mighty propositions making up the album. The thrash/death metal incitement of Le Règne du Chaos is one to grab ears; its creators the French band Amzera who recently released their debut EP to potent responses.

The melodic metal adventure of Canada band Dark Insignia had ears and imagination entwined too through their Longest Day whilst straight after them in the song line-up, Buffalo hailing Dark Morning had feet and neck muscles energised with the sinew driven hard rock revelry of Devour, again the two band’s position side by side showing the potent mix of styles and textures making up a perpetually enthralling playlist.

There are plenty other incitements raising personal lust including Chicago five piece Destroythm, their track Dead Man’s Switch a ravenous slab of groove/alternative, and rapacious metal, whilst another Cape Town hailing band in Devilspeak snarl and chew at the same senses to thrilling effect, the effect of the pair’s hostility soothed by the glorious swagger and charm of EVP from DC trio Hellpie, its bluesy, dark rock ‘n’ roll irresistible.

Danish power rockers RedWolves are another creating an inescapable excitement for our ears with their melodically flavoursome yet muscular sound whilst Rock N Roll Villain Society do what they do best, create a boozy rock ‘n’ roll anthem to get fully involved with.

That vast stretch of styles impress again as side by side both the gripping extreme avant-garde metal of Skindrone and tempestuous antagonistic metal of Skin Kage inflame ears and imagination in their specific ways, successes backed by an array of subsequent storms and provocations including one from Burlington bred death thrashers The Desolate and another through the Antwerp thrash/hardcore crossover sound of Toxic Shock. As mentioned earlier, there are respites from the furies within the album, rich propositions like the bewitching atmospheric stoner seeded exploration of Californian duo Tvsk but generally they are quickly followed by more rousing confrontations like the stirring blues spiced heavy metal/rock uncaged by N. Carolina twosome White Knuckle Black Out.

With the album brought to a rich close by firstly Italian symphonic metallers Winterbreed and their song You Will Cry My Name and the earlier mentioned Pink Carnage, exhaustion is matched by thick pleasure and an urge to explore all those involved, a reaction no one will escape. With more mouth-watering songs from the likes of Critical Dismemberment, Ohol Yeg, Light Keeper… actually we will stop there because every band deserves a bold mention but space limits that so do peruse the track-listing below, hit the links in their names and explore all the bands making up the release, new favourites are a definite result. Then, or before, give yourself deserved pleasure by going over to purchase a copy of the compilation which in turn means helping a very deserving cause.