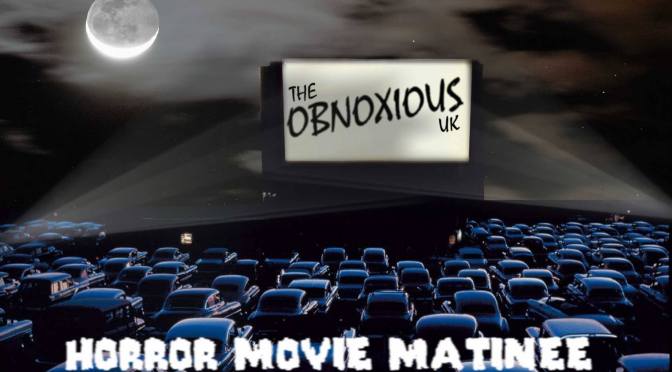 With a title like Horror Movie Matinee, you cannot help expecting a viscerally imposing and furiously bloody proposition unafraid to go where angels fear to tread, and it is fair to say that the new album from UK punkers The Obnoxious UK does not disappoint. Bulging to the point of bursting with fifteen tracks which resourcefully draw on horror punk and psychobilly flavours as well as a thick dose of punk rock from over its most potent ages, band and release makes for one compelling and thoroughly enjoyable punk ‘n’ roll roar.

The Midlands based band began in 2001, and whilst going through a few line-up changes over the years has persistently grown and lured in devoted local attention and support which over recent times has solidly spread, Horror Movie Matinee poised to be the band’s biggest and most potent instigator yet. The release of the video for album track God For A Day really whetted the appetite for the forthcoming full-length, though it turns out it is only one particular spice in the hellacious riot.

Anthemic rhythmic bait is food and drink to these ears and that is exactly how album opener Drinking With The Dead makes its first wave of persuasion. The drums of Fez roll in and along with attitude and catchy tempting, swiftly joined by the raw and similarly magnetic riffs of guitarists Bri and Kimbo. The latter is close behind with his vocals too, potently adding to the infectious incitement of the horror punk escapade. It is not a song with a startling statement of originality yet with its punk tenacity and carnivorous shadows, easily provides a soundtrack for any salacious moonlit and cemetery based jiggery-pokery.

The tremendous start is backed by Walking Dead, another horror punk spawned proposal equipped with spicy hooks and melodic fire, though the blood lust seems restrained, as indeed the song, in presence and effect in comparison to the first and the outstanding Drag Me To Hell which follows. Psychobilly is given a poke this time but equally the track has an old school rock ‘n’ roll blaze to its addictive stomp. The string pulls of bassist Jacko resonate across the song whilst the duller but no less gripping beats only help infuse a great vintage tone to the song. With fiery enterprise from the guitars employed too, the track sets down a lofty plateau for the album which is matched and worried time and time again.

Loaded Roadkill is one straight away unleashing a potent challenge. Fusing a hard rock and rockabilly tenacity into its punk attitude, the song bounces over and pounds the senses with accomplished vindictiveness and anthemic charm. Already across a quartet of tracks there is a distinct variety on show which continues in the mischievous Elvis Is Dead. Opening with what just could be the final croon of the man before he died, we wish, the track erupts into one of those irresistible old school punk sing-a-longs. It is barely over a minute of unbridled shouting and stomping from band and listener alike, loosening things up ready for the more intensive might of Burn and straight after Cadaver Doll. The first of the two snarls and growls in sound and vocals, Misfits like toning coating the caustic punk heart of the contagious track whilst the second takes the influence of the US protagonists even deeper into its primal instincts and expels an extremely tasty and feisty prowl of horror punk with a dash of Calabrese. It is another of the biggest peaks in the landscape of the already highly thrilling release.

The same kind of recipe igniting the last two songs is a flavoursome essence in God For A Day, though the song has a more volatile punk intensity which reminds a touch of Crashed Out. Veined by a great sonic groove and adventure, the track hits the personal sweet spot before making way for the excellent Time For Change. Think Angelic Upstarts meets 4 Past Midnight yet singular to The Obnoxious UK, and you get a thick idea of the excellent encounter, which in turn has to depart to allow the hard rock sculpted When Angels Fly Away to blaze away. Initially the song is a classic rock like croon but once its switch is flicked, it bursts into sonic flame fuelled by a punk abrasion and heavy rock temperament. It is another strong offering but lacks the same kind of spark as other songs and especially that within 3 Dead Souls which preys on ears right after. Another irresistible parade of dark rhythmic tempting opens up the encounter, soon followed by a melodic and sonic venture just as shadowed and gripping. As the song pulls back slightly on its predation for the vocals, a raw Tiger Army breath adds to the intrigue and invention, entangling with the rest of the track’s rock ‘n’ roll for a hefty slab of virulence.

Through the psychobilly/horror punk washed Ginger Is A Werewolf and the hostile punk ‘n’ roll of Iceman, the album tightens its grip further on ears and emotions. Both are inescapable offerings which ruggedly seduce and intimidate respectively before Amelia brings a little caustic ‘necro’ romance to the mix.

The bonus track of The Cottage Strangler brings the CD to a close, and it is indeed a bonus as the band slips into a ska punk and dub warped treat of a finale. Like the Vox Dolomites meets Ruts and probably more so Ruts DC, the song is pure pleasure.

Horror Movie Matinee is not really troubling boundaries and forging new inventive templates for punk and rock ‘n’ roll but The Obnoxious UK has definitely unleashed a romp which has body and imagination eager, and pleasure oozing from every receptive pore. That alone is one big reason for all punksters to check out band and album.

Horror Movie Matinee is released on Friday March 13th on STP Records and can be pre-ordered now @ http://www.stprecords.co.uk/page4.htm

The same day sees the album’s launch party the Cottage of Content in Chasetown where The Obnoxious UK will be joined by Dirt Box Disco.