Jingo – The Art Of Loving 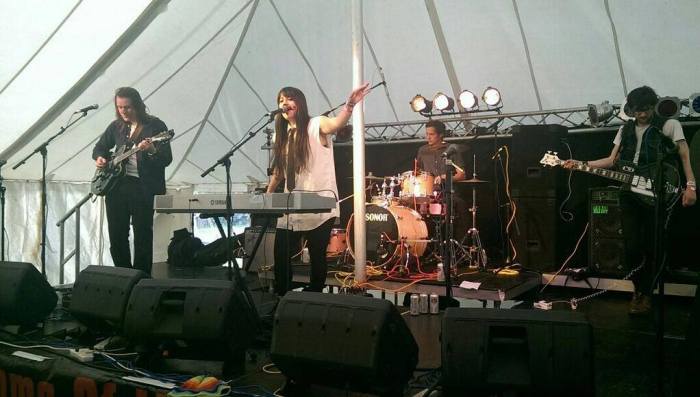 One of the artists which has truly excited and impressed without reservation over the past couple of years has been UK band Jingo. The London based quartet has inspired critical acclaim and a hungry fan base through a series of diversely inventive and explosively creative singles. It has led to an impatient anticipation for the band’s debut album and now that it is here, it feels like we all short changed them with our hopes and expectations. The Art Of Loving is an exceptional encounter, a delicious collection of melodically fiery and emotionally intensive songs which have a revelry which seduces feet right through to the passions. Individually unique but uniting for a fluidly captivating adventure, the album brings some of their previously released singles together with striking new songs. Those older tracks though which fans already know well and love, have been revitalised in their mix as well as in their actual bodies to create nothing but fresh and scintillating exploits within the exhilarating album.

Jingo consists of guitarist/vocalist Jack Buckett, his American wife and vocalist/keyboardist/guitarist Katie, drummer Joseph Reeves, and bassist Chris Smith. Since its early days and shows across Brooklyn, New York and London, Jingo has gone from their first gig which saw them supporting Graham Coxon of Blur, to being compared to the likes of Fleetwood Mac and The Magic Numbers, and to gaining fevered attention and support from independent press and radio whilst becoming one of the most talked about bands with fans and again the underground media. Their nine singles marked the band firmly out as having the potency to break into the strongest spotlight of attention and recognition, now the year in a half making The Art Of Loving could and should be the doorway into that expansive scenery for Jingo.

With former member Sahil Batra adding his talent to some of the tracks too, the band instantly ignites ears and imagination with album opener Black Flowers. A heavy air and throaty bass coaxing engrosses ears straight away but it is tempered by the vocal seduction of Katie. It is a magnetically intriguing union of hungry shadows and vocal temptation which only gains further potency as post punk scythes of guitar add their voice to the compellingly brewing emprise of the song. Once hitting its sultry stride, the track is awash with evocative keys and a metallic resonance to riffs which adds mystique and intimidation to the encounter respectively. The song is a dramatically contagious and ingeniously crafted fusion of light and dark, merging the  heavier seventies rock essences of Jess & the Ancient Ones in majestic flirtation with the melodic beauty of The Magic Numbers and the atmospheric beauty of Solar Halos, but ultimately something unique to Jingo.

The following Skypunch opens with an elegant caress of keys but also another imagination grabbing breath of dramatic breeding. It is fair to say there is a powerful drama to all of Jingo’s songs, all different but all building an intensity and climatic narrative musically and emotionally. The second track soon parades a cinematic landscape of sound and emotion, its thick yet warmly charming enterprise suitable for a narrative of global espionage or intimate emotional dilemma. Keys and drums entangle with strenuous ideation across the song whilst Katie roars with mesmeric beauty matched by the similarly vocal endeavour of Jack’s expressive guitar invention.

Both When You Want Me and Belong To You take the listener into imaginative journeys of tenacious and creative revelry. The first comes through a sonic almost sinister ambience to cup ears in an engaging vocal tempting amidst a

bordering on tempestuous climate which like the rhythmic enticement seems to grow and bulge with intent the deeper into the song the listener finds themselves. Looking like it is heading into a storm, the song instead twists back on itself to parade a glorious stomp of funk seeded melodies and boisterous rhythms courted by a psychedelic enticing of guitar and keys. It is an engrossing and impossibly infectious song almost matched by its successor. Belong To You opens with a bass lure which offers hints of The Pixies before joining a warm flame of chords and the even hotter vocals of Katie. With a masterful rhythmic dance from the sticks of Reeves creating a gripping spine, the song smoulders energetically with a sixties pop and psychedelic infectiousness but also a provocative aural melodrama to voice and the multi-flavoured textures erupting throughout the outstanding track.

That sixties feel with a just as strong fifties pop additive, brings the following title track to enthralling life too. Barely a minute long and simply the voice and harmonies of Katie accompanied by finger clicks, it is simply mesmeric and irresistible. Like Wanda Jackson meets Sarah Vaughan, the track is a small treat and soon making way for Home. Right away there is angst and drama, a word impossible not to use with every song, to the thick bass hues and short stabs of guitar which skirt the visually provocative vocals. The track is sensational, a seductive and mentally intrusive aural movie which sets body and emotions ablaze whilst coaxing thoughts to create their own personal adventures.

A gentler flight is brought by the brilliant Blue Wail. Exotic vocal expression and jagged guitar teasing wraps engrossingly around thoughts whilst bulging rhythms and bass sultriness adds to the Caribbean coloured canvas spawning the

creative devilry emerging above it. It is a transfixing fascination of sound for ears and imagination soon emulated in its own distinctive manner by Before You Were Born. The song is an emotively enchanting ballad but one still fuelled by vivacity through its rhythms and invention which keenly engages the striking heart felt vocal presence of Katie. It is a delightful embrace, if not as potent on the passions as other songs on the album, which shares its intimacy and passionate depths with the magnificent Jaclyn. Written about a friend of Katie who killed herself, the song is simply creative vaudeville set in the walls of one of the most creatively inspired and melodically pungent songs you are likely to hear this year. Every second, note, and syllable is soaked in passion, anger and love entwined in a fire of invention and yes aurally poetic drama. There is also a sultry seduction to the song which weaves and swerves curvaceously before ears to entice and pull the senses into the heated grandeur and personal fever of the track. Brilliance hardly covers it.

The jazzy elegance of Same Without You is next and cored by a piano grace, proceeds to cast a melodic temptress of itself melodically and theatrically to stand hand in hand with the similarly seductive vocals. With broody basslines and individual fires of invention lining the sensational enticement, the song is a climate of invasively emotive hues, melancholic ambience, and lustful invention, much like next up IQ84. The track from its first moment is parading an irresistible web of choppy riffs, jangling chords, and mountainously heavy bass and rhythmic sculpting. Complete with seventies seeded keys, a touch of The Stranglers not for the first time hinting away in keys, and virulently suggestive and flaming atmospheres, it is another stunning pinnacle in the release.

The Art Of Loving is brought to a close by the increasingly captivating beauty of Don’t Call It Love, a resourceful and melodically shimmering ballad once again allowing Katie to show the depths of her voice before utilising it in a crescendo of creative courtliness enclosed in a tempest of united passion and inventive energy. It is a slow burner of a song which given time matches the depths and heights of the other songs on what is easily one of the albums of the year. Fans of the band will probably expect to hear that but even they will have their breath taken away by its magnificence.

The Art Of Loving is released on September 1st @ http://jingomusic.bandcamp.com/album/the-art-of-loving