Excitable and bursting with a plethora of things to share and as many sounds to pleasure with, the debut album from UK funk punk band FireFallDown is an infectious and thrilling treat. These Wounds has an insatiable hunger to leave everyone partying and broadly grinning, taking them into an elevated emotional state and fulfilled in heart and thoughts. With a passion and an impressively crafted collection of songs the album is a refreshing and vibrant dynamo of great imaginative sounds and unbridled boisterous energy.

London based Filipino-British trio FireFallDown began in 2006and took no time in inciting attention with a relentless and persistent touring of the UK, Philippines, Poland, and the U.S., building on the immediate attraction and lure their expressive and tightly melodic fusion of pop punk, high energy rock  and jazzy funk has upon the ear. Two singles garnered them further concentrated acclaim whilst support slots for Coheed and Cambria only raised their profile further. Now with the release of These Wounds as well as the band headlining the 150 Fest UK-wide tour next spring there is a sense they are about to explode and draw in a great many more to their sonic mission. 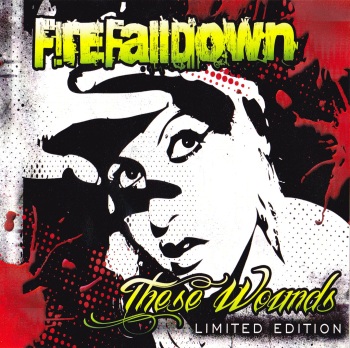 immediately introduces itself to the ear with the roisterous energy of Mr. Rockstar. A pop punk song with irresistible funk tendencies it riles up the senses with open and honest addictive melodies and stirring riffs.  It is a song that refuses to be ignored, exhilarating with persuasive and impossible to deny energy veined with fun warm melodic hooks and passion driven lyrical and musical intent. The band openly state their influences as the likes of Red Hot Chili Peppers and Blink 182 and at times throughout the album that is easy to hear but another predominate flavour that comes through here is Alien Ant Farm, though FireFallDown have a tighter and more defined infection than the Americans ever cultivated.

The album from a strong start just gets better and better as each track teases and pleases. From the following Jimmy Eats World meets NOFX like punk sounds of Commissioned, through the excellent rampaging single and title track from the album, to the mesmeric Dear Mom And Dad with its Green Day spicery, the album ignites and sparks welcomed emotions. The trio know how to captivate their audience through a combined intelligence of songwriting and thoroughly intriguing and surprising array of sounds. No song is alike but always distinctly FireFallDown and though it carries many tastes that one can find as seeds from other bands all is twisted into their own recipe of impressive and expressive funkcore.

These Wounds is exceptional and an album which works itself deeper into the heart the more it is allowed to wrap its enthusiastic creativity and incessant charms around the senses. Without a weak track or an ounce of predictability the release is a consistent gift to the senses. Strong and giving throughout there is a trio of consecutive tracks where it reaches its fullest height and satisfaction. I Am The Way races in on mischievous rhythms from Andrew to lead one straight into the incendiary guitar of Jon who lights things up further into the song with an explosive solo. His vocals as throughout the album are excellent and welcoming with a bite and edge ensuring one pays attention to his words. The bass of Joel is a prowling brooding creature which again as with the other two enhances each song with well crafted lines and play. Another Alien Ant Farm like song with traces of Sugar Ray it is immediately followed by the equally immense Stand Tall. This is an aggressive rock track recalling the Red Hot Chili Peppers when they were at their best with a punk intensity that kicks open the way for the song to release its raucous muscular energy.

Logic and Fallacy completes the three exceptional peaks with another heavier rock driven power and sturdy spine. It further shows the diversity within the band and their creativity offering a fuller Incubus/ Bad Religion lined slice of punk rock. It is triumphant and as with every song on These Wounds sets FireFallDown out as a band that inspires and lights up all who welcome it into their individual worlds.

These Wounds is excellent; a release that the more you allow it to entertain incites thrills that go deeper and deeper. Simply FireFallDown are the future of UK pop punk with their inspiring multifaceted sound.

FireFallDown have donated all the proceeds from the album launch, Heal These Wounds towards the medical expenses of their close friend Brittany Kamruddin in her fight against Lyme disease, for more info go to their website www.firefalldown.com