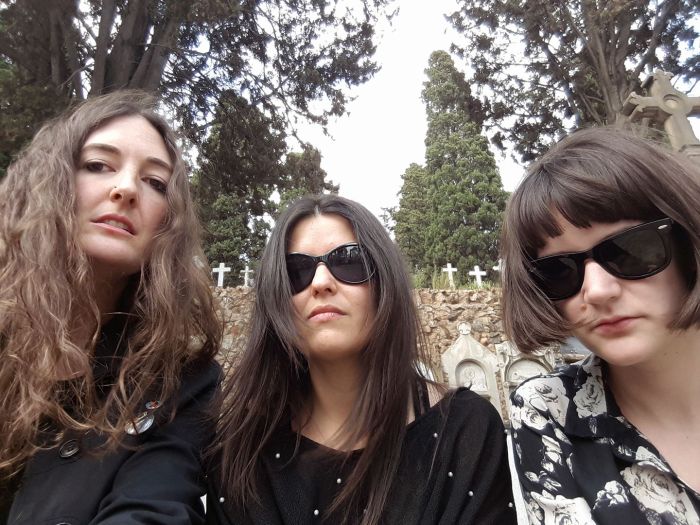 For everyone there are certain encounters which forge an instinctive union with personal tastes; records which more than most tap into the creative imagination. We have come across a great many over recent years, having the privilege to listen to and assess a constant flood of offerings, but few have made the immediate lustful impact as Spectral Ascent, the new album from Spanish psych/doom trio Kabbalah. The release is a siren for the senses, an enchantress for the imagination, and one of the most desirable proposals heard in recent times.

Kabbalah is the creation of Carmen and Marga, former members of Pamplona rock band Las Culebras. 2013 saw the well-received release of their self-titled debut EP, its success followed and backed by the Primitive Stone EP fourteen months later. Both lured keen attention towards the band’s fusion of occult rock, 70s retro, and classic heavy-psychedelic sounds of the late 60s; a mix creating a cauldron of temptation and dark suggestion, a snarling trespass of predacious uniqueness nestling often irritably under the beauty of alluring vocals and swarming harmonies. With Alba completing the current line-up in 2015, Kabbalah sound has blossomed again for Spectral Ascent, hints of its fascinating evolution coming in the 2016 single Revelation and earlier this year its successor Phantasmal Planetoid, both prominent lures within nothing but across the album.

Spectral Ascent quickly coaxes attention with its opening title track; a short intro of melodic flirtation with a shadowy undercurrent which plays like a music box enticing entrance to an alluring dark realm. It’s elegant if sinister coaxing leads into the equally beguiling lure of Resurrected where from the heavy throb of bass and the magnetic pull of vocals the song has ears and appetite swiftly engaged. Guitars similarly draw the senses with their melodic sparkling, teases leading into the more formidable and imposing heart of the track. Never deviating from its seductive swagger though, the song twists and crawls through ears right into the psyche, moments of almost carnal intensity and calmer flows of romancing melodies igniting the imagination and body like few other encounters. 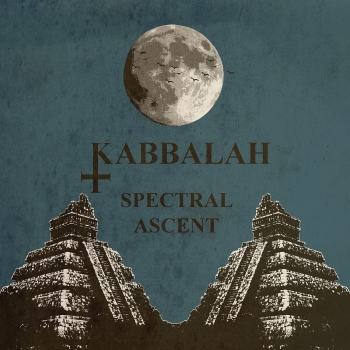 The sheer drama of the outstanding proposition continues through next up Phantasmal Planetoid. Its climate is instantly darker and more formidable as the bass snarls, never losing its heavy trespass as the song moves on to court a boisterous gait with turns of tetchier growls. It is masterful stuff, stoner and doom essences colluding with those earlier mentioned flavours as vocals and harmonies soar. No lightweight on addiction loaded hooks either, the song is manna for ears and instincts, a consuming persuasion also bred in the voracious antics of The Darkest End and immediately after within The Reverend. The first of the two aligns carnivorous riffs and bass irritability with spell spun grooves and the ever bewitching vocal union across the band. It resembles a fusion of Blood Ceremony and Jess and The Ancient Ones, yet is as individual to Kabbalah as you could wish for. Its successor is almost punk like at times, an underlying crabby edge flaring up across its psych and post punk spiced tapestry like a hybrid growth from a union of Au Pairs, Cradle, and Deep Purple.

Following their triumph, The Darkness of Time offers a funk fuelled swing of psychedelic rock, its body a web of heavy and classic rock honed enterprise which might miss the more predatory traits of its predecessors but has body and spirit wrapped up with ease. Its occultist lure only adds to its relentless charm; bait which is taken to more threatening places within the outstanding Dark Revelation. Its first breath has a garage punk taste, the subsequent canter more of that Au Pairs like post punk tempting before Kabbalah turns it all into a compelling and virulent, almost unruly, tango of creative flirtation.

The Shadow slinks up to ears in its own inauspicious way, tempting and warning with portentous charm before its fires break from an initial smoulder into a white hot rock ‘n’ roll stroll while the album closing Presence shares a calmer though no less heated weave of retro and modern nurtured adventure to further enthral. The dancing prowess of the drums, not for the first time, is almost consuming in its rousing and resourceful drive of the magnetic sounds bringing the album to a masterful conclusion.

The need to go again is controlling as Spectral Ascent drifts away, and the pleasure in doing so ever rewarding. The album is immense and rich food for a passion for psych/doom infused rock ‘n’ roll. Some bands feel destined for greatness from their first moments; Kabbalah is one and their new offering commandingly intensifies that belief.

Spectral Ascent is out now via Twin Earth Records and available @ https://kabbalahrock.bandcamp.com/album/spectral-ascent