Even before seeing her, Janine Shilstone, the lead singer of Scottish outfit Vukovi feels like a blend of Barbarella and Harley Quinn; a bold vocal seduction of beauty and devilry, glamorous temptation and mischievous warrior which her visual presence and energy only accentuates. Vukovi matches that inescapable focal point with a sound and energy just as tenacious and creatively boisterous not forgetting hungrily imaginative. It is all in evidence within the bands self-titled debut album,  a rousing and enjoyably imposing roar of pop infested rock ‘n’ roll as colourful and attention grabbing as its vocal protagonist’s hair.

Emerging in 2010, Vukovi have earned an acclaim ridden reputation for their live prowess which has more recently seen them successfully play festivals such as at Download, T In The Park, Hard Rock Calling, Live at Leeds, and British Summer Time Festival as well as open for Highly Suspect late last year. Equally a clutch of singles, many bringing their thrills to the album, have lured increasing attention which now the band’s first full-length will surely explode into even eager life such it’s striking fun and adventure.

Vukovi, band and album truly explode into life with opener La Di Da, a recent single which leaves the speakers shaking and body exhausted. Immediately, as a strike of musical drama scythes across ears, the titanic presence and roar of Shilstone ignites the imagination, her vocal strength and character a glorious trespass as warm and inviting as it is formidable and striking. Bass growls and swinging beats are equally as dynamically riveting, Hamish Reilly’s riffs almost stabbing the senses as Shilstone continues to blaze. A song partly inspired by the singers almost obsessive appreciation of the relationship between The Joker and Harley Quinn, it is a volcanic pop and rock stomp with a touch of Djerv about, indeed the Norwegian band’s vocalist Agnete Maria Kjolsrud the closest comparison to Shilstone’s distinctive presence that we can suggest. 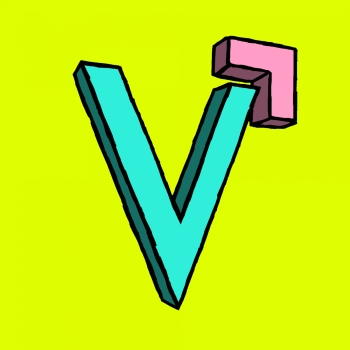 The track is immense, a plateau setter which the album does not always match from thereon in but certainly worries track by track starting with And He Lost His Mind. With steely riffs quickly chaining ears with their predacious intent, and  vocal cries and rebel rousing just one trap in its manipulation of ears and body, the track borders the carnal whilst unleashing a catchiness as invasive and inescapable as it’s primal urges. For no obvious reason, post punks Xmal Deutschland frequently come to mind during the song, well a pop version of them, the track carnivorous in its earthy air and sonic snarl.

Weirdo has a lighter pop flirtation to its body yet still riffs and bass add their already established barracuda growl and heavy prowl to the stirring tempting. Drummer Colin Irving jabs with relish as melodies swirl with their own raw magnetic flair around emotion lined vocals before the Blood Red Shoes meets Morningwood stroll of Target Practice involves more caustically shadowy endeavour. Again bassist Jason Trotter brings a deep dark edge to the affair with ears while the catchy tenacity of its predecessor is equally matched as Shilstone robustly serenades with increasing passion.

Through the Paramore-esque charm of Prey, though we would suggest that the Americans have never discovered the instinctive thunder in their sound as that which persistently frequents song and album, and the controlled but naturally frantic exploits of Bouncy Castle, ears are aroused and buffeted with feet unreservedly worked on with zeal as the imagination is fed a variety of textures and enterprise.

Vukovi is more often than not tagged as a pop rock band but already the album has established them as real rock ‘n’ roll with a skilled hand at creating the warmest moments of infectiousness and emotive intimacy as betrayed in the beguiling Wander; a song where vocals alone seem to come from an inner flame of personal revelation. Similarly, I’M WIRED has that potency of word and expression within its cauldron of lava-esque sound, mercurial rhythmic incitement, and melodic radiance. Both tracks beguile; their personalities from another place on the Vukovi spectrum of creativity and as powerful and compelling as anything around them.

Next up, Animal has things lustfully bouncing again, its rhythms a driving infection as spiny riffs grizzle alongside the ever radiant vocal lament of Shilstone who in turn is hugged by the siren calls of keys, while Boy George leaves little to be further desired with its Animal Alpha hued stew of sound and imagination if admittedly it does not quite ignite personal passion as much as other songs, their success rather than any deficiencies within it the reason.

He Wants Me Not is another which only pleases with its crystalline grace and rousing energy but cannot quite live up to the heights of certainly the likes of La Di Da and Wander, though by its close satisfaction is overflowing and hips weary but still willing to embrace the gentle swing and roaring heart of closing track Colour Me In.

Produced by long-time collaborator Bruce Rintoul, Vukovi is our introduction to its creators, an encounter which with no expectations of it, surprised, thrilled, and certainly across its first two thirds just blew us away; its final stretch only confirming a new lusty appetite for the band’s sound. We do not expect to be alone in that realisation and strength of enjoyment.

The Vukovi album is out now through LAB Records, physical copies available @ http://vukovi.tmstor.es and digitally @ http://labrecs.com/VUKOVI-iTunes