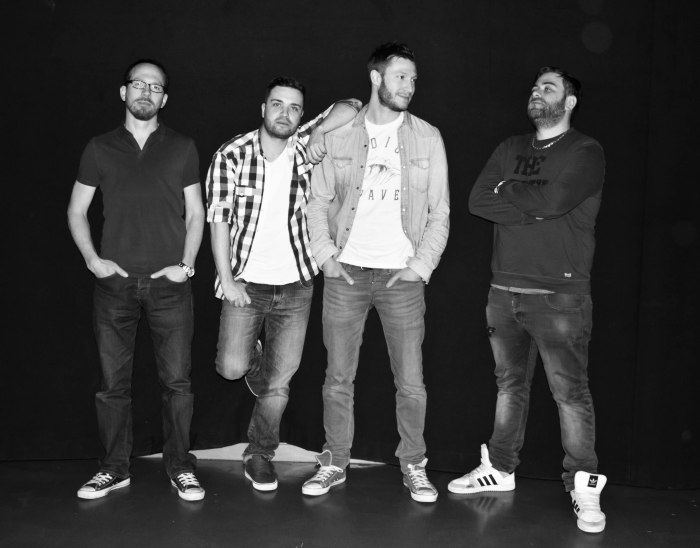 Sharing a sound inspired by bands such as Incubus, Hoobastank, Breaking Benjamin, and Three Days Grace, Leaving Passenger is a Paris hailing band starting to pick up keen attention beyond their local shores. They have just released When it’s done, their debut EP offering six tracks of melodically fuelled and emotionally empowered alternative rock. There are few big surprises within the richly engaging encounter but for accomplished and enjoyably catchy rock ‘n’ roll, the EP is a potent introduction to the French quartet.

Formed in 2014 by vocalist Julien Boireau, guitarist Pierre Christophe ‘PC’ Maurier, and bassist Julien ‘Jumar’ Margat, Leaving Passenger soon completed their line-up with drummer Vince De Sousa. Honing their fiery sound over time, the band has already earned and become a strong reputation and presence on the Paris live scene which When it’s done is hoping to spread to a wider audience.

The EP opens up with Scream, its fizzy start soon ruptured by sinewy beats and in turn a fiery wash of guitar. From within that strong coaxing, wiry grooves emerge leading into the melodic and emotionally intense heart of the song. Boireau instantly impresses with his vocal presence, his tones powerful and earnest within the increasingly intense flames of guitar. There is a definite touch of Hoobastank to the song which only adds to its draw as warm harmonies court muscular rhythmic intent for a great start to the release.

Running Back To Me leaps upon ears next, instantly winding tempting grooves around them as vocals and riffs unite inside. Boireau again commands attention though sharing it with the creative exploits of PC and the firm hand of De Sousa’s energetic beats. Carrying more of a mix of Three Days Grace and Poets Of The Fall to it, the track eclipses its predecessor with its emotional intensity and creative drama; again big surprises absent but enjoyment felt full.

Through the southern blues spiced I Don’t Care and the reflective caress of Better Place, the EP continues to hold on to keen ears. The first blooms into a blaze of heated melodies within an emotion drenched climate while its successor is a captivating heart shared ballad with its own moments of passional fire.

The haunting essence of the last track is matched by that within Lies on the floor, keys floating over the senses fuelling that atmospheric feel as incandescent melodies and bold intensity smoulder to intermittently burn brighter throughout. Without quite matching the strength of other songs it still lodges in the imagination as too the closing title track with its melancholy wrapped strings/keys and intimately haunted balladry. It provides a fine end to the EP, blossoming to greater heights with every listen; an ability also shown by When it’s done as a whole.

The Leaving Passenger sound has yet to find its own identity but it only satisfies without reservations and within the When it’s done EP provides an introduction which just has to be followed up.

The When it’s done EP is out now through numerous online stores.