Antigone Project – From Its Room 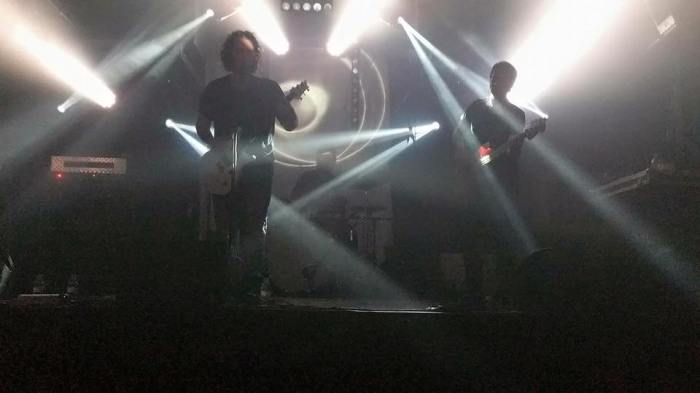 Hailing from the creative belly of Paris, Antigone Project made a potent first impression with their self-titled EP late 2014; a debut which has only strengthened its persuasion over time and listens. It was stirring and eventful tempting, a fusion of provocative flavours which has been lifted to a whole new plateau with its successor, the From Its Room EP.

Embracing the emotive qualities of post and progressive rock in electronic and guitar conjured soundscapes whilst equally drawing on the eighties inspired post punk /synth rock essences which marked its predecessor, the EP is a bolder and more immersive adventure exploring persistently evolving and evocative rock landscapes within tempestuous sonic climates. The leap in creative maturity and indeed experimentation between releases and their individual characters is as open as the wealth of textures woven into the EP’s six striking tracks, and as thoroughly enjoyable as that first offering was, From Its Room simply leaves it in its shadow.

Antigone Project is the brainchild of vocalist/guitarist/keyboardist /songwriter Frédéric Benmussa and a project initially intended as a solo venture. Formed in 2002, the band expanded over time with bassist Manu Ventre and drummer Fred Monaco alongside Benmussa upon the latest encounter. Inspirations to the band includes the likes of Pink Floyd, Depeche Mode, Radiohead, Joy Division, Tool, and numerous more, spices which were an open spicing within that first release but far less prominent in the unique proposal of From Its Room.

The EP opens with First Rush, an immediately provocative mist of keys and sonic suggestiveness surrounding the senses as the song simultaneously brews up a dramatic and tempestuous climate. Benmussa’s soaring tones soon launch across the brooding canvas, his alluringly harmonies entwining with the floating wash of keys. Both powerfully draw ears as riffs and rhythms brew up within them, the imagination firing intro leading the listener to the following creative theatre of The Black Widow. Tangy hooks and sultry surf rock bred grooves engage ears and appetite straight away as the song’s sinister but seriously alluring character blossoms. As Benmussa’s voice brings another beguiling texture into play, the track’s exotic mystique and post punk charm enjoyably increases, addictive rhythms courting the surrounding adventure cast by guitar and keys. The track is stunning, an early favourite and highlight of the EP which alone shows the new diversity of sound and creative boldness soaking the release.

A live version of Trismus comes next, the band opening with grungy guitars as gothic hued keys rise up around them and the darker lure of the bass. Earlier Radiohead was mentioned as an inspiration to the band and here there is no escaping their scent as again a sweltering sonic colouring with surf/psych rock shading escapes guitars and harmonies as cinematic drama and haunting essences collude. It is a beguiling, imagination igniting immersion of the senses and thoughts, soon matched in creative endeavour by the following Sphere.

In three parts but meant as one musical movement, it begins with MoonSphere where gothic toned keys enclose ears as poetic melodies slip from the acoustic prowess of Benmussa, both expanding their temptation with an array of warm and imposing textures as vocals and rhythms bring their contrasting elements. There is a touch of The Cure and The The to the song, that previously mentioned eighties feel showing itself in a song seemingly as much Nine Inch Nails spiced. The track’s infectious union of shadows and melodic persuasion, a dark and light side, leads into the rousing revelry of VenuSphere. Straight away the track erupts, bounding along with tenacious rhythms aligned to a just as frenetic sonic and melodic resourcefulness. Inescapably though, it is still bred from the same emotional heart as its predecessor even when involving ears in its salacious temptress like festivity. Again a skilful collusion of contrasting shades and textures, this time honed into a virulent spirit arousing canter of electro rock/pop, the track sets flows straight in the final movement in the piece, PerfectSphere.

A darkly shadowed and almost portentous coaxing of ears and imagination, its riveting theatre and emotive tapestry of sound beguiles as it inflames and though as the other two, the song does work as a single proposal, Sphere has to be played as one whole flight of sound to ensure the fall through its cinematic and fascinating depths are felt to the full.

From Its Room is a thrilling new experience with Antigone Project; as suggested a major step on from their certainly impressing debut but one still seemingly like it is only part of the way towards something bigger and bolder, of which anticipation is already brewing.

The From Its Room EP is out now digitally through iTunes and on Ltd Edition vinyl via Season Of Mist @ http://shop.season-of-mist.com/vinyl/antigone-project-from-its-room-lp