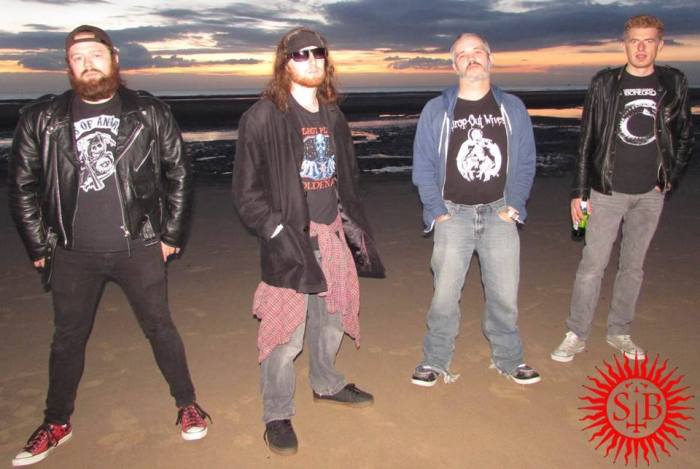 There is nothing better than watching a band which catches the ear build on previous successes whilst pushing themselves and sound. UK rockers The Senton Bombs is a band which consistently manages that impressing trait and has so again with new album Mass Vendetta. The band’s most diverse and boldly adventurous offering yet, the eleven track stomp sees the band pushing into feverishly imaginative and variety spun territories whilst still rocking like a bitch in season incited hound.

Formed in 2004, the Blackpool quartet seemed to hit the ground running in sound and attention, become a greedily devoured live proposition matched in support for their early releases including a pair of well-received albums. Fair to say though as successful as they were, the band really hit the spot on with Chapter Zero in 2013. In many ways it was a landmark in the band’s growth, The Senton Bombs honing their persistent embracing of varied flavours and styles into something which really set the band apart from the crowd. Various singles and the excellent Phantom High EP of 2014 saw the band pushing their fusion of hard and blues rock fired punk ‘n’ roll on again; their rousing and inventive stomps heavily nudging on worldwide awareness which this fourth album will surely only ignite.

Such its bold step forward from its predecessors in imagination and character, though hindsight shows the seeds were already openly audible in past releases, it took ears a first listen to get to grips with the Ronnie Bomb produced encounter. From there though, it was full steam ahead as body and imagination got eagerly involved with the album’s dramatic roar which starts with recent single Trailblazer. From its initial percussive coaxing, spicy grooves spiral out, wrapping eager ears as rhythms add their thick thump. The potent start is soon stirred up further by the recognisable grainy vocal tones of bassist Joey Class and his bass’ similarly familiar throaty sound. Equally, the imaginative twists and turns which emerge as melodic calms and clean vocals collude with fiery expulsions and energetic tenacity only increase the song’s potency. Further encasing ears in a blues lined sonic web cast by guitarists Damien Kage and Johnny Gibbons, the great track is a pungent hint of things to come with its entwining of unpredictable and dynamically varied textures.

Mainstream comes next, a track already soaked in acclaim as a single last year. It opens on similar blues laced grooves to its predecessor, they entangling the rampant swings of drummer Scott Mason before things relax a touch as bass grooves join those of the guitars and Class’ always alluring and anthemic vocal delivery. Rising strands of creative theatre and rousing energy adds to the brewing drama and contagion of the track, the album itself increasingly gripping an already eager appetite as it heads towards an even headier plateau through the following pair of Train Wreck and Out West. The first of the two grips ears straight away through Mason’s rolling beats alone; only increasing its persuasion as flirtatious riffs and grooves joins the rapacious energy fuelling a rockabilly courting slice of bracing rock ‘n’ roll. Like Turbonegro meets The Pirates, the track has the body bouncing and appetite greedy before its successor explores a melodic and emotively enticing landscape. The song is as virulently catchy as anything on the album but takes the band into new creative scenery with its melody evocative and emotively inspired alternative rock balladry with a definite Midnight Oil feel to it.

The album’s title track strolls boldly in next, its feisty punk ‘n’ roll a rebel rousing exploit for body and spirit led by the scything beats of Mason and Class’s attitude soaked tones. The track is simply rock ‘n’ roll to lose control to, a mosh pit inciter and rebellion instigator which just needs to be the next single. Then again that can apply to numerous tracks within Mass Vendetta, as the contagion bulked 13 Days instantly proves. Riffs and hooks dig deep, anthemic vocal and energy infests, and rhythmic predation only excites as the track throws itself around like a creative dervish.

Allowing a breath to be taken, Avalanche saunters in next, sharing surf rock flames across its sultrily ambient skies and gravelly smouldering vocals. Unsurprisingly, the song also has an edge to its heart and creative nature which magnetically contrasts with the almost exotic hues and bracing emotion sharing their tempting.

Back to next single choices and the blazing romp that is Pretty Tricky makes a loud shout. Hard and punk rock meets classic and glam spiced rock ‘n’ roll, the track has feet involved by the end of its first torrent of chords and burst of rhythmic rampancy, the voice on board within the first round of the seriously addictive chorus.

Wedlock Horns brings another irresistible twist to the album, its reserved but eager entrance providing eighties rock/new wave flirtation from which Class and band swing with a southern blues infused revelry which again has restraint but stronger zeal in its lively heart. If without leading the body into bad habits, the song enthrals just like the folk punk lined Red Shield. With Class’ cleans tones as compelling as the lyrical drama and incitement, the track sublimely grips ears and imagination whilst sharing its emotive snarl.

Mass Vendetta closes with the highly enjoyable Apex, another imposing and predacious slab of infectious hard/punk rock brawling giving the album a rousing finale and the listener one last reason to hit the play button again. As in some ways expected, the band has moved on again in sound and invention but this time with their biggest leap in creative diversity and bravery yet. If it did not already, the world is about to know all about The Senton Bombs.