Primal Static – The Corrupting of the Revolution EP Align blues breathing guitar, imagination manipulating electronica, a soul bred rock roar, and vocals that border on the feral as they echo the angst of a modern disconnected world and you have the striking sound of US outfit Primal Static and their new fascinating rather enjoyable EP. Not that it is just a blending of styles the Austin, Texas based duo offer but a bold and rousing new adventure of noise as individual as it is wonderfully challenging.

Primal Static consists of vocalist/guitarist/songwriter G.T., a self-taught musician discovering a love for rock and blues as a child, and keyboardist/bassist HouFei, a classically trained pianist from the mountains of China who came to the United States on a full scholarship to study piano and graduated from the Peabody Conservatory. Together they create a proposition which tantalises ears and imagination whilst enveloping both like a sonic infection; one borne of the melodic discord and dark ravening shadows that pervade a world seemingly intent of personal and global self-destruction and a proposal which is unapologetically contagious. 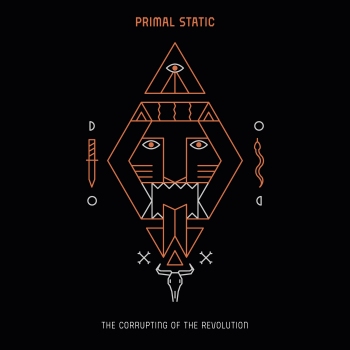 The Corrupting of the Revolution is the latest venture into their unique sound, an overspread of the senses cast by four blatantly individual tracks. It opens up with Velvet Crush and instantly entangles ears and appetite in a splatter of mercury hued electronics. Guitar cast smog soon washes through the potent lure; it in turn swiftly joined by the distinct tones of G.T. as a haunting atmospheric air rises. That growing sonic enterprise of guitar is simultaneously matched in craft and imagination by the startling twists and almost psychotic prowess of HouFei’s keys, they an adventure in their own right in a riveting first track.

Need You So Bad follows freshly wrapped in attention and acclaim as the band’s recent single. A tenebrific throb of bass colludes with the unpredictable stroll of electronic rhythms and the similarly seeded steely noises dancing with them. From its first breath, the catchy web is set and ensnaring ears and thoughts, guitar teases flirting alongside before a great blues groove seduced as vocals shared their reflection. It is easy to hear why the song made such a rich impact on ears and radio shows around the world though for us it is definitely eclipsed by next up Blister Core.

The track is simply compelling rock ‘n’ roll, a song sure in its reserved but bold stroll and enticingly heated in its blues spawned guitar flames and psych rock nurtured keys. The warm vocals of HouFei equally make a thoroughly engaging contrast and companion to the grainier tones of G.T. though ultimately it is the complete picture of all aspects together which left the passions transfixed.

The EP’s final offering is Soul Jacket, a song which certainly took a fair time longer to persuade than those before it but eventually seduced with its sultry lures and sixties psyche blues hues. As throughout the release, the classical breeding of HouFei’s craft links up with the freedom driven imagination of her instincts, that complimented by G.T.’s own unshackled writing and dexterity. Soul blues fuelled, the song emerges as an inescapably strong close to an EP which just enthrals by the listen.

The Corrupting Of The Revolution is a release which may not rest easy with everyone but thrill those truly looking for something individual, fresh and creatively honest.

The Corrupting Of The Revolution EP is available on iTunes, Spotify and other online retailers now.