Nine Dart Finish – The Misadventures of… 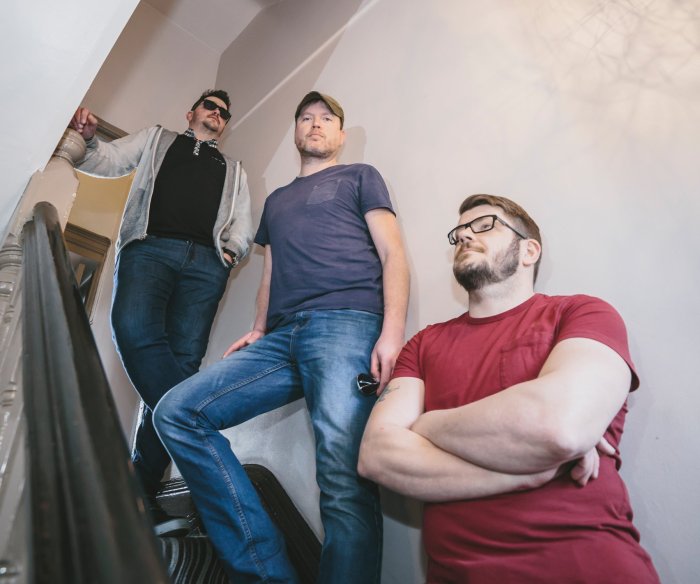 Nine Dart Finish is a British outfit drawing on the wide influences of the likes of Weezer, Supergrass, Queen, and Ian Dury for their pop fuelled rock ‘n’ roll; The Misadventures of… is their debut album which unapologetically has the body bouncing as fun floods every pour of its magnetic enterprise. The trio from Birmingham has already lured potent attention from fans and media alike with a handful of singles especially potent; appetites for their boisterous sound which their first album can only multiply.

Bringing the lively antics of recent singles, highlights of that first EP and new tracks together in one captivating union, The Misadventures of… roars into view with the outstanding The Cut of Your Jib. The track is wild rock ‘n’ roll, almost feral in its energy as riffs and rhythms harry ears just as eager vocals blaze. As the album continues it is easy to see why certain tracks were chosen and potent as singles and teases for the full-length but for personal tastes it is tracks like the raucous rock bred opener which trapped the keenest attention and passions. With a touch of Queens of the Stone Age to its contagious tempest, the track is a garage rock lined clamour getting the album off to a magnificent start.

The following Fall to Pieces is a far calmer proposition as a melodic jangle colludes with vocal harmonies before the track settles into its warm catchy swing. There is no preventing the quick shuffle of feet to its stroll, keys adding to its summery scent as vocals and melodies entangle before In the City uncages its own rock ‘n’ roll flame. Within its slightly rawer attack, hooks tease and tempt as riffs nag, Proudman’s beats striking with relish as they drive the infectious escapade.

Recent single Kicking & Screaming is next, a song which blossomed by the listen as its organic rumble aligns to melodic enticement. The former gives the otherwise gentle seduction a volatility which imposes without truly erupting, a combination gripping ears within a grunge pop like proposal while Charlie Bonkers offers up a melody woven slice of Brit Pop nurtured enterprise. It is fair to say that the song did not impact as potently as those around it on our tastes yet as honest to admit it had the hips swinging and vocal chords playing without any trouble.

You Don’t Bother Me similarly did not quite grab as strongly as many of its companions with its sixties hued pop but again involvement in its enticement was unavoidable as with the blues kissed rock of Falling for You. Both tracks epitomises the band’s knack at weaving varied and seriously catchy adventures though each is swiftly overshadowed by the album’s finest moment consisting of its final three songs.

From its initial melodic caresses Fabio’s Overture blossoms into a truly mesmeric slice of pop rock, emotive strands in voice and sound entangling another lure of virulent catchiness as inescapable whether the song is ablaze or simply smouldering. Its thick enticement leads into the rousing devilry of You’re so Cool. As again pop floods its bold rock ‘n’ roll, the track nags and taunts attention with relish. With something of UK duo The Sea about it, the track is superb rivalling the opener for best song honours though they are equally matched by the tenacious stomp of album closer London. There is a certain mod like hue to the song which only adds to its outstanding character and roar.

Though as mentioned there are some tracks which undoubtedly eclipsed others for us, The Misadventures of… is one thoroughly enjoyable involvement from start to finish. Nine Dart Finish have a sound with open growth in every new song so expect many more lustily fun times ahead as well as right now with their new offering.

The Misadventures of… is out now through iTunes and other stores.