Though understandably often tagged as a ska punk band, Faintest Idea definitely shows themselves to be a true punk band with a penchant for ska bred hip swinging revelry loaded with oi! inspired snarls upon new album Increasing The Minimum Rage. The eleven track stomp is an irresistible roar of politically charged songs that have no qualms in getting feet and bodies feverishly bouncing whilst thoughts and emotions are inspired by its lyrical bite. Most of all though, the British band’s new offering is simply one of the most rousing slabs of contagious rock ‘n’ roll heard in many belligerent moons and deserving of everyone’s energy and time.

Formed in 2008, the Kings Lynn hailing Faintest Idea initially was a jugular ripping punk band venting their political unrest and distrust. That attitude and defiance has never lessened even as the band began weaving in inspirations taken from two-tone, ska and reggae influences. 2013 saw the release of debut album The Voice of Treason on Manchester’s TNS Records to swift acclaim, soon potently backed by the videos for tracks such as Bull In A China Shop and Youth. Live the band has equally become an essential great time for many, the “rudeboy street punks” taking their rousing presence to shows and festivals across Europe and the UK, including in 2014, a 10 date tour of Russia.

Now the band is ready to uncage a new infectious call to arms in the shape of the Hieronymous Melchers (Capdown, Citizen Fish, King Prawn and Snuff) recorded and Massimiliano Giorgini (Anti Flag, Rise Against, Alkaline Trio, Common Rider) mastered Increasing The Minimum Rage. Featuring guest contributions from Vic Ruggiero (The Slackers) and Sean Howe (Random Hand), the album quickly reveals Faintest Idea to have a grouchier fire in their creative belly and a sound at its heaviest and angriest, musically and lyrically, yet with no detriment to their instincts to swing and inflame the listener’s body. The first track, Circling The Drain opens on a theme setting sample as horns meander in the background. From there as a guitar adds its vague musing, the song grabs a breath and leaps into a captivating stroll with Jack’s choppy riffs colluding with the flirtation of mischievous melodies amidst organ shared smiles. The brass flames of trumpeter Sara, trombonist Bobble, and tenor saxophonist Lil dan add to the infection quickly grabbing ears and imagination, creating a rich platform for the snarling vocals of bassist Dani and his dark throated bassline. There is a snarl to Jack’s guitar enterprise too and a firm hand to the beats of the other Jack but as the song’s climate gets feistier and more agitated, a rampant swing stills drives it and the listener before it slipping straight into the equally irresistible Cocktails. 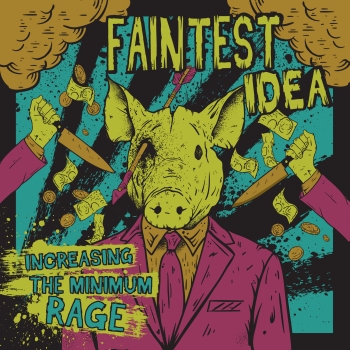 The second track similarly bounds through ears with rhythms and riffs as inescapable bait and a virulent catchiness to its energy and attitude equally matched by the band’s vocals. Throughout hooks grip and again flirt with the imagination as the song’s skittish gait takes care of the body, vocals in turn challenging thoughts at the same time as brass unveils a rich seducing in something akin to Rancid meets Random Hand meets The Members. Its mellowing departure simply simmers into the sultry embrace of Down Pressure, a funk infested and ska fuelled romp as light on its feet as it is antagonistic in voice. As its predecessors, the song defies the listener not to become fully involved, dares them not to offer their hips and support; a challenge impossible to win as the song leaps around with kinetic persuasion.

The power pop/ska punk exploits of Echo Chambre steals attention next, working its addictive charm on every aspect of a willing disciple as guitar jangles and pop punk rhythms act as ringleaders to another thrilling proposal embracing smouldering brass and lively shadows furthered nurtured by Dani’s vocal attitude. Its tenacious exploits lead to the thick energy and aggression of The Well Has Run Dry which, from its first breath, is a confrontational proposition equipped with spiky hooks and a flaming melodic coaxing courtesy of guitar and some emotive lip prowess. United it stirs up air and emotions before the outstanding Stick Em Up (Lords of War) takes a stand with its punk ‘n’ roll contagion. As jazzy and funky as it is ska and old school punk spun, the track tantalises and badgers in sound and tone. Female vocals bring a B52s spice to certain parts whilst other times the song rumbles along like a mix of early Specials and The Adicts, revealing itself as another enjoyably multi-textured adventure.

Through the Clash/ Serious Drinking like chest beating of the beguiling Throw Away The Key and the ballsy rock ‘n’ roll of No Consequences, greed and thick enjoyment for the album is only confirmed before being given another big shot in the arm by the brilliant pairing of Ouroboros and Corporation. The first of the two is a web of flavours and styles as surf rock spiced guitars entangle with ska spawned riffs and intrigue loaded progressive punk grooves whilst Dani and co take potent shots at political and social injustices. The track is glorious and swiftly matched by the dramatic theatre of its successor. With vaudevillian prowess to a sinister soaked sound, the band bring the exploits of the song’s villainous title protagonist into panto-esque but certainly not trivialised view before descending upon them with oi! fuelled animosity and anthemic incitement. The track is ingenious; pure creative theatre and heading numerous memorable moments within the album.

Closing on Tightrope with its strongly brooding persuasion of sound and imagination, Increasing The Minimum Rage makes it so easy to say it is destined to be one of the year’s highlights. From start to finish it has every aspect of the listener enthralled and involved; only increasing that hold with subsequent plays whilst showing that to stand up and be counted does not have to see an absence of unbridled fun.

Increasing The Minimum Rage is released via TNS Records on 1st April @ http://tnsrecords.bandcamp.com/album/increasing-the-minimum-rage