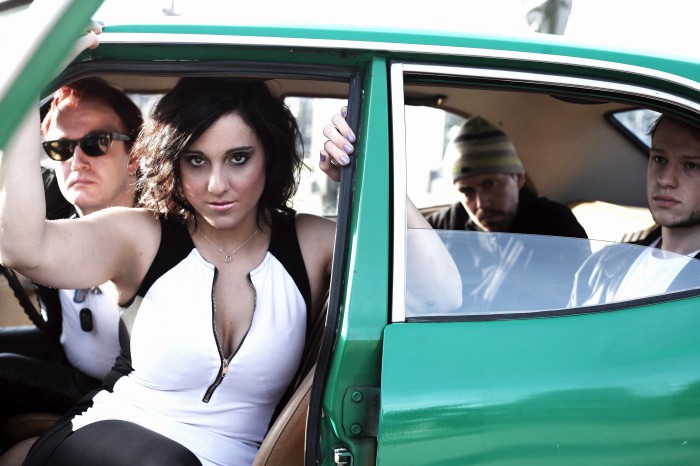 Formed by a rooftop pool in Tenerife, UK alternative rockers Dark Sky Park are now gearing up to make 2016 their year to grab attention and it all starts with their new EP Follow Me getting its national release January 8th. The five track encounter is an enjoyable and increasingly captivating fusion of rock and pop ‘n’ roll with a healthy dose of classic metal to spice things up further. Already a keenly supported proposition on their local and Northern rock scene, Sheffield hailing quartet have those wider spotlights in their sights and with more offerings like Follow Me, it is easy to suggest they will court the rewards they seek.

Made up of vocalist Debbie Bilson, guitarist Ainsley Stones, drummer Hannah Jasper, and bassist Aidan Hall, Dark Sky Park has a sound which toys with any attempts to pin it down. As the EP shows, at times it is stoner-esque, in other moments rock pop or punky, and always carrying a heavy metal spicing to keep things unpredictable. Follow Me is also an encounter which persistently works away on ears and appetite; not a release setting a fire right away but a proposition in varying degrees getting under the skin with its energetically vibrant songs. References have been made to the likes of Royal Blood, Queens of the Stone Age, Black Sabbath, and Ziggy Stardust era Bowie in regard to the band’s sound but this too only reveals part of the picture.

Follow Me opens with its title track, the song striding in on thickly boned rhythms and winy sonic enticing. Quickly it sets down a familiar but inviting canvas to which Bilson adds her potent vocals as the guitars weave a tapestry of melodic enterprise. Early Blondie immediately comes to mind as the song blossoms with open infectiousness and warm harmonies, these aligned to increasingly steely textures from Stones. It is contagious stuff, a song using recognisable essences to fine effect against its darker more cantankerous aspects.

A No Doubt meets Dirty Youth feel grabs ears in the magnetic lure of Lonely Girl next, the second song a sultry temptress with voluptuous rhythmic hips swinging within a smouldering glaze of vocal and melodic seduction. There is a seventies flavoured vocal croon to the song too which only adds to the compelling drama which steals major attention first time around and only strengthens its hold with each play.

Dark Sky Park digs into their classic and hard rock passions for the following Stand My Ground, its tenaciously muscular character the spring board for fiery grooves with matching vocal attack. Fair to say the song lacks the spark of its predecessors yet leaves satisfaction full and participation keen before attention gathers around next up Marty Feldman’s Eyes. With a title like this the song was already half way there to sparking eager intrigue, completing the job with its Animal Alpha/Kate Bush like dance with ears and imagination. As other times within Follow Me, there is a want for a more forceful and aggressive attack from the rhythmic side of the song, but it is a small want in something which continually demands body and voice get involved, completing its persuasion by closing with a touch of The Adverts to its punkish exploits.

Things come to a fine end with Suicide FM and its rock ‘n’ roll swagger cloaked in again familiar but appealing hues and sound. When a track has feet bouncing and emotions smiling there is much to praise and certainly the final offering finds that success with ease whilst hinting at bigger and bolder exploits lurking within Dark Sky Park.

Follow Me is a great introduction to national awareness, one bursting with potential that ensures that Dark Sky Park are going to be watched by a great many hereon in.

The Follow Me EP is released January 8th through most stores.