Studfaust – Where The Underdogs Bark 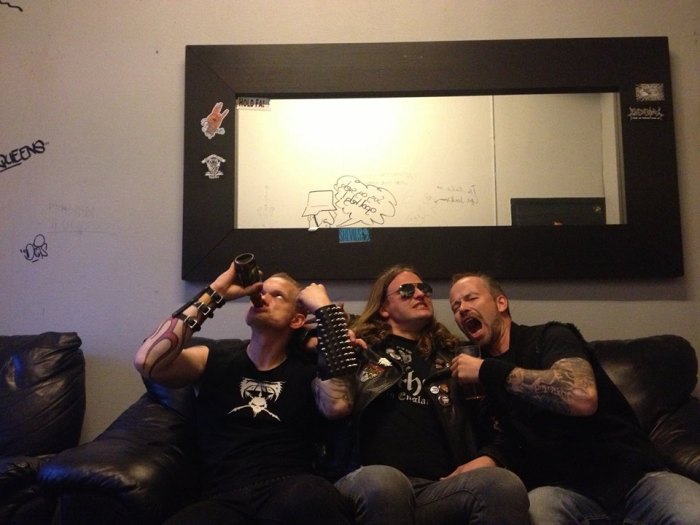 It is hard not to be turned on by a heavy dose of dirt encrusted, liquor encroaching rock ‘n’ roll and it does not come in much finer form than that which spills voraciously from the might of Norwegian protagonists Studfaust. A third heavy rock, third filth coated metal, and the final segment pure punk rock, the sound conjured up by the Oslo/Bergen hailing trio is pure venom fuelled antagonism. Imagine The Exploited and The Damned in their early days in salacious cahoots with Twisted Sister and Black Sabbath in the distinctive bed made by Motorhead and you get an idea of the weighty thrills and hostile rampage which makes their new mini-album Where The Underdogs Bark one of the year’s treats.

Studfaust was unleashed in 2011 by vocalist/guitarist Tore Bratseth aka Stud Bronson (ex- Old Funeral, The Batallion, Bömbers) and Bård “Faust” Eithun (Emperor, Blood Tsunami, Mongo Ninja). That same year they recorded and released debut single Half Human, Half Dynamite /1980’s Ladies to strong responses, its vinyl release via Soulseller Records subsequently sold out whilst their gigs equally stirred up attention and fans. The line-up became three soon after with the recruitment of bassist Pete Evil (Blood Tsunami, Mongo Ninja, Hellride). Again uncaged through Soulseller, Where The Underdogs Bark riles up ears and passions from start to finish with an instinctive wickedness which easily suggests it could and should trigger the widest spotlight upon them, certainly its devilry deserves it.

Half Human, Half Dynamite is the first riot to accost ears and instantly sets the juices flowing with raw and abrasing riffs aligned to urgent rhythmic provocation. Vocally too the track simply sparks the purest punk rock instincts 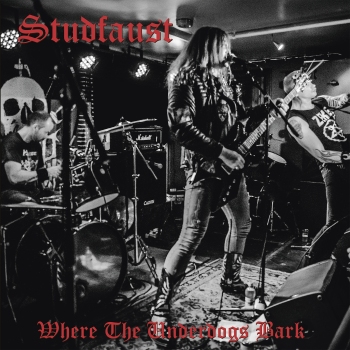 whilst grooves and spicy hooks tease and play with the imagination through mischievous rapacity. It is a glorious stomp and easy to see why the eager reception when released as that first single.

The following title track is just as feverishly contagious and incendiary. Caustic riffery from guitar and bass is courted by a simple but ridiculously addictive groove from the off as Eithun swings his sticks with all the muscular contempt he can muster. Within two songs Studfaust shows they have no interest in anything other than adrenaline driven, dirt kicking rock ‘n’ roll with a metallic predation to its raw devilment, the second track the perfect example with its unfussy and bordering on hostile ferocity.

A southern rock twang flirts with ears and thoughts as the next up Hell Is Full embraces the senses. Its gait is a slower heavy metal stroll than that of its more abusive predecessors and similarly veined with a repetitive and relentlessly attentive grooving and enterprising sonic causticity. There is a fire in the belly of the song too which gives it a distinctive toxicity to the others, whiffs of AC/DC and Turbonegro enhancing the abrasive seduction before it all departs leaving the floor clear for the punk aggression of Street Judges Gavel to roar and spill its feverish sweat upon it. A sense of Discharge adds another hue to what is, like all tracks, a seemingly Lemmy and co inspired canvas of middle finger energy and honest senses abusing creativity.

The outstanding Erection Of The Egoist with its ravenous and carnivorous bass swagger and infection spewing grooving takes the album to another irresistible level. The vocal squalls driving it are as uncompromising as the viciousness of the rhythms whilst that imposing lure of Evil pungent bait is as trapping s ever, but the real submission grabbing edge of the track comes with the lethal hooks and spicy grooves out of Bronson’s guitar.

The release closes with firstly The Devil Of Mine and its punk fest of flesh flailing riffs and rhythms bound in funk infested basslines and lastly the irreverent temptation of 1980’s Ladies. The first of the two growls vocally and musically with a pissed off attitude and intensity whilst its successor is sheer glam punk ‘n’ roll, kind of like Sex Pistols meets Towers of London for an inescapable and infectiously addictive rampancy.

Where The Underdogs Bark is not trying to invent or even reinvent the wheel but for a bodily fluid soaked slab of real rock ‘n’ roll it is hard to think of anyone who has thrilled and impressed as much as Studfaust do on their album. A must for all punk and metal infused rock ‘n’ roll fans everywhere.

Where The Underdogs Bark is available via Soulseller Records now @ http://www.soulsellerrecords.com