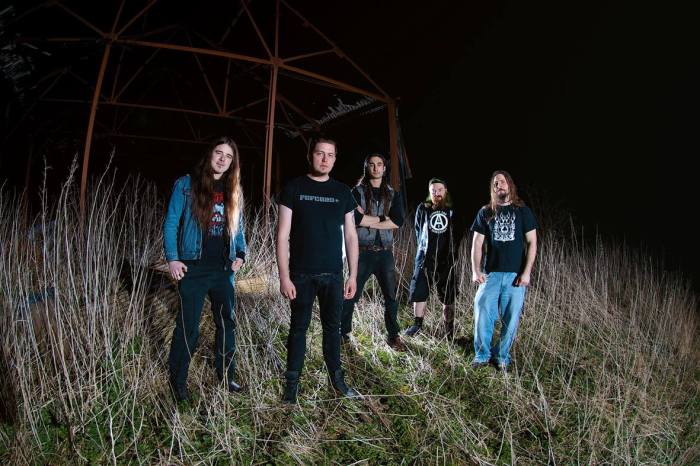 If UK metallers Mutagenocide have not reached your neck of the woods or gaze yet never fear they are coming with their ferocious and feverishly flavoured sound, certainly if new EP Devolve gets the breaks and attention it deserves. Made up of seven voracious onslaughts which rage and stampede with pure metal aggression, the release unleashes an unpredictability which is as compelling as the invention and array of styles which fuels its adventure. The band has been making a stir across the metal underground in the UK and now Devolve suggests the time is ripe for the quintet to find a wider intensive attention.

Oxford based, Mutagenocide showed their intent and brewing depth of sound with a self-titled debut in 2012, the four track EP a potent reinforcement of their already keenly followed and recognised live performances. Now the line-up of vocalist Jay Taylor, guitarists Pat Scott and Paul Clayton, bassist Tom Greenway, and drummer Ben Wilsker pounce with a provocation which suggests they are ready to stir up a countrywide hunger with the potential to fuel attention much further afield.

From the first swipe of sonic belligerence over a persistently winding flume of guitar, opener Hysteria has ears and appetite wide awake. It is a dramatic entrance which is soon twisted into a tempestuous charge of thrash bred antagonistic 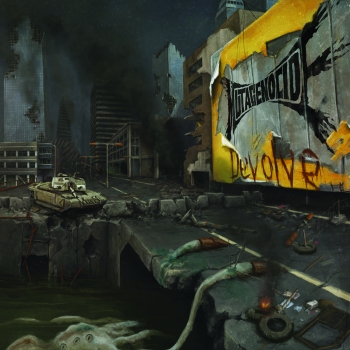 riffing and vicious rhythmic hostility, this ridden by the caustic vocal squalls of Taylor. But as is a constant across the whole release, it is merely a moment in an evolving landscape, grooves and addictive hooks as well as subsequent progressively seeded ideation, veining and working its way into the heart of the fierce and impressive incitement.

The immense start is swiftly emulated and surpassed by the title track, it also an immediate fury and explosive assault through ears. A melodic and progressive teasing plays within the demanding surge before merging into an addictive web of tenacious grooving and venomous melodic metal coaxing. It is a blistering mix which again seems to find a new avenue to investigate and contagious bait to expel within the unrelenting voracity of the song. It is a brilliant encounter which is full of drama and intrigue, incendiary craft and seductive predation, but most of all sheer compelling invention.

Entombed and Swallowed makes a reserved entrance next, a guitar painting an emotive hue into an evocative atmosphere which carries no threat yet has an air of foreboding to it. It is the same as a melodic wind of progressive rock spicing opens up its narrative, guitars impressing with every expressive note but the darker shadows of the bass ensures a portentous tempering is lurking. That darkness seeps into the growing weight and punch of the rhythms before fuelling a corrosive maelstrom of acidic sonic endeavour, acutely jagged riffery, and an increasing spite to the commanding swings of Wilsker. Like a brawl instigated by Lamb of God and Sybreed with thoughts of Cambion also making their hints, but an aggressor with the poise and exploratory expression of melodic metal and the emprise of post metal, the track is a riveting blaze of adversarial emprise. It is soon outshone though by the similarly cultured but rigorously individual Half-Born, it’s closing seduction before a corrosive finale alone passion firing but as a whole proposition the song is a startling and ruggedly imposing and shifting triumph.

Remeron Nightmares with its stomping thrash sculpted entrance and Wretched bring the release to a mighty conclusion. The first proceeds to spin a malevolent web of precision crafted inhospitable toxicity encased in a simultaneously intimidating and alluring storm, its presence as primal as it is intensively honed. Equipped with a familiar swagger, a sonic invention which leaves lips licked, and a primal virulence the track is a monstrous treat. The same which can almost be said about its successor, a final enthralling furnace of raw and hellacious enterprise which whilst lacking the stature and uniqueness of its predecessors, is still a mighty end to an outstanding triumph.

There is very little to put up against the Stu Mckay (Malevolence, Desolated, Ingested, Annotations Of An Autopsy, Eternal Lord) recorded and Tim Turan (Nuclear Blast, Candlelight Records) mastered release though a bit more variety to the admittedly excellent vocal delivery of Taylor would be welcome and interesting. It is a minor thing in a big thrilling step from Mutagenocide, a band you can expect to hear and see a lot more of ahead.