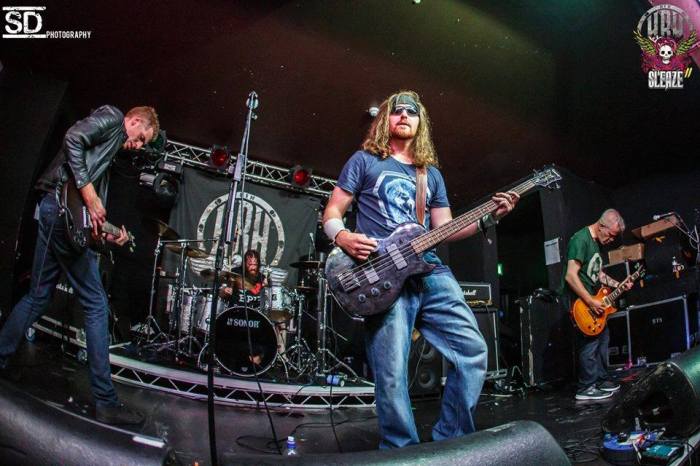 It is fair to say that any news of something new from UK rockers The Senton Bombs has us licking our lips in anticipation. Four spirit rousing previous albums among just as potent singles and EPs has fuelled that reaction with each encounter building on the exploits of its predecessor and pushing the Blackpool hailing quartet to the mass recognition and attention we with so many feel they deserve. The band’s impending fifth and new album, Outsiders, continues that trend sparking excitement in appetite at the prospect of something special whilst taking the band’s songwriting and sound to another level of prowess and adventure.

Perpetually varied and flavoursome in its styles and character, the band’s rock ‘n’ roll has eagerly evolved and grown up across their albums. With every offering The Senton Bombs has pushed it and themselves to new areas and adventures but all the time reinforcing the recognisable individuality of their music. With Outsiders, the band has aligned their ever ready punk ‘n’ roll instincts with southern and classic rock scented endeavour on the hard rock side of their sound; the result, a rousing and raucous collection of multi-flavoured and variously delivered anthems as familiar to the band as they are unique.

The album erupts into life with its title track, Outsiders entering upon punchy rhythms and sonic stabs as the ever enticing vocals of bassist Joey Class open up their declaration. With attitude and defiance at its core in sound and word, the track prowls with a swinging hard rock swagger lit by the flames and enterprise of guitarists Damien Kage and Johnny Gibbons. The throaty throb of Class’ bass resonates throughout, adding a darker threat to it all as the bold swings of drummer Scott Mason descend. It is a controlled but dynamic start to the release, an ear and attention grabbing statement of intent swiftly backed and built upon.

The band’s new single, Who We Are, does both with relish and tenacity straight away. The devilishly earthy stroll of the bass instantly had imagination and appetite hooked, its inescapable lure aligned to the perpetually lively dynamics of Mason’s rhythms. Both continue to arouse and manipulate as guitars and vocals join the song’s incendiary holler; a union brewing a delicious slab of punk ‘n’ roll as virulently catchy as it is rapaciously invasive.

From one major highlight of the release to another as Violet Black follows unleashing its own rock ‘n’ roll trespass. With each album Class has developed his vocal presence, almost developing a two sided proposition. Here he returns to the grainy delivery which partly trademarked the band’s sound from day one and is always a welcome essence to their creative diversity. The track itself is a boisterous slice of punk rock with a blues rock lining and hard rock virility.

If the previous track is headstrong, I Am Ablaze is an insatiable hell-raiser of sound and rowdiness; an anthem epitomising the band’s live sound as much as its rebel rousing heart. Raw and feral yet skilfully woven to create a hellacious roar the track is superb; The Senton Bombs at their rabidly infectious best leaving next up Reckless Youth a tall order to match. That it does though by revelling in the calmer side of the band’s attack, growing from a melodic shimmer into a contagious stroll led by the inspiring swings of Mason. Reflecting on times past as youths into the seeds of the band stirring things up today, the song is a bold smoulder compared to the fires that are its companions but just as magnetic and riveting

Across the irresistible country blues rock scented saunter and vivacious swing of Bury The Hatchet and the mellow southern surf kissed croon of Remind Me Of The Moon, the album simply blossoms in its variety of sound and imagination while Dead Revolution immediately had body and spirit addicted to its Misfits laced  darkly hued rock ‘n’ roll. As ever hooks escape the band with instinctive agility, riffs and rhythms offering their own spiky bait to get hung up on as vocals lead the way. Similarly the individual craft of Kage and Gibbons masterfully gets under the skin alongside the equally devious antics of Mason and Class’ bass.

Video is a track which would fit as perfectly within the confines of previous encounters such as Chapter Zero and Mass Vendetta; a trademark rather than formula Senton Bombs song easy to devour greedily before Under Offer hits the spot dead centre with its fifties scented modern punk infused rock ‘n’ roll. Reminding of another band deserving mass attention in Canadian outfit The Black Frame Spectacle, the track is a stomping viral temptation.

Wake The Maker brings the album to a close with its classic/hard rock melody shaped howl and though it did not personally excite as those before it, the song is a richly satisfying conclusion to an album which we can only suggest is the finest offering from The Senton Bombs yet.

Global attention is long overdue for the band we strongly suggest but maybe about to be seriously poked by Outsiders, a release and title which sums up the band’s sound and presence within rock ‘n’ roll and the individuality which will always make them stand out and excite.