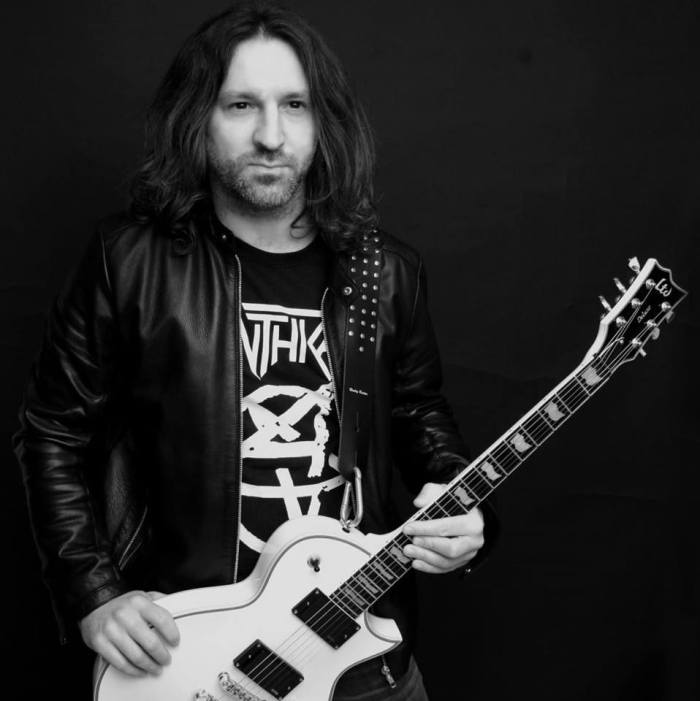 Providing a debut album easy to suspect most heavy metal fans will find plenty within to spark an eager appetite, Silver P is the solo project of guitarist Pugnale, alias Roberto Colombini. The self-titled release though also embraces a host of rock and metal flavours to its creative heart providing an even wider range of ears a rich and intriguing experience.

Creating Silver P early 2017, Pugnale approached drummer/sound engineer Antonio Inserillo with a clutch of songs a few months later, persuading him to get on board with the emerging project. Finding a singer was a more difficult issue but eventfully Alex Jarusso was enlisted to the Italian band’s line-up, in turn becoming a quartet for the album with bassist Alessandro Cola. Their sound takes inspiration from the likes of Airbourne, Dio, and Megadeth but finds its own if not unique certainly distinct voice within a first album released through Red Cat Records.

The Deep Breath Before The Plunge opens up the release, its dramatic instrumental landscape a firmly magnetic intro to the release. The imagination easily ran with its epic and growing theatre of intimation and sound before Fields Of War erupts from its portentous air with an armoury of infectious riffs and rhythmic confrontation. The classic/eighties metal influenced delivery of Jarusso soon erupts from the battlefield and though it is a general vocal flavouring which we generally find hard to embrace as a style, his presence and prowess only adds to the track’s heavy/classic metal nurtured appeal and enjoyment.

Pugnale’s guitar craft and enterprise is another potent feature and provides even more attention grabbing enticement within next up Road To Hell, his grooves wrapping round ears with infectious intent as the rhythms of Inserillo and Cola rap and throb with flirtatious aggression. Growing into a definite best track contender it is swiftly rivalled by the blues rock lined strum of Memories; a track with a whiff of stoner rock and grunge to its relatively calm but increasingly tempestuous climate

Thrash and alternative hues colour the metal heart of The Net, wiry grooves luring quick pleasure into a just as enjoyable web of heavy and classic metal smelted invention. It is a trap as unpredictable as it is familiar in certain ways and another song adding to the album’s best passage of tracks though A Shade In Light with its opening feral riffs and nagging grooves within predacious shadows is as attention enslaving as anything around it. It never relinquishes that hold either as its dark trespass and melody woven predation continues to captivate.

Out Of This World follows and also ensures a compelling engagement with ears and appetite. It too has a darkness to its body and air which is disrupted and seared by bewitching sonic flames and melody hot tendrils and it is maybe no coincidence that for us the truly standout tracks are those bred in the shadows.

The thrash poked chug of I8 is old school metal/hard rock at its most wild and frivolous but built on open craft and adventurous mischief which seems to get more daring by the twist while Straight At The Heart closes things up by uncaging a rock ‘n’ roll holler not too hard to have body and spirit bouncing with.

Generally classic/heavy metal is a flavour others will appreciate more than us here but we cannot deny that Silver P, band and album, pleasured and captivated before getting under the skin in many ways.

Silver P is out now via Red Cat Records across all worldwide digital stores.