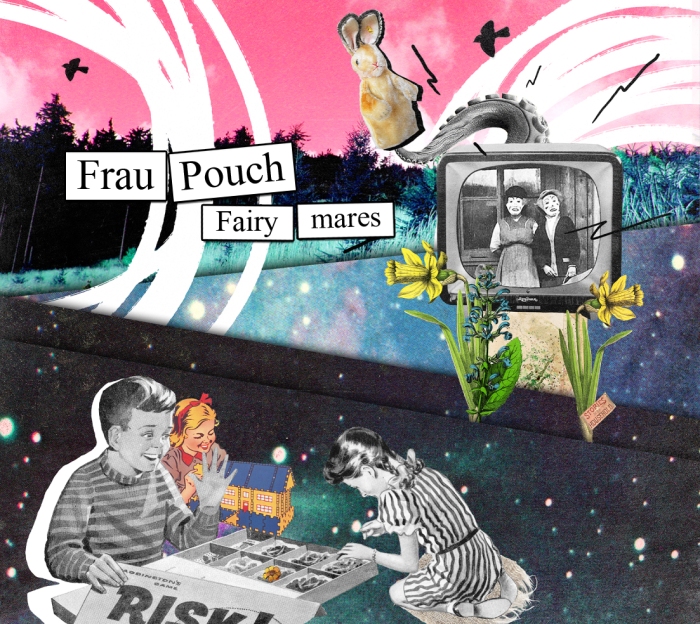 I am sure we were not alone in eagerly anticipating a first album from British no wave post-punks  Frau Pouch. They are a band which captured and ignited our imagination on our introduction to them in a split release with fellow Kent outfit Houdini back in 2012. Their sound is a sonically and creatively gurning fusion of post and garage punk with other feverish forms of wonderfully irritable and imaginatively twisted rock ‘n’ roll. Each release, since that first meeting, has seen the Medway trio stretch, twist, and inject their imagination with new creative psychoses, nurturing their most irresistible outcome yet in debut album Fairymares.

As previous tracks and the All Hail Space Chicken EP before it, Fairymares swiftly entangles ears in a web of sound and invention, opening up with the band’s lust breeding single of last year Biscuit Beard. From the glorious carnivorously natured, bestial toned growl of Crook’s bassline setting things off, the track infests body and soul. Wise’s riffs are just as carnal in touch and sound, his flowing grooves equally rapacious as Freeman’s controlled swings punch further subservience to the song’s call on an instantly lustful appetite. The track is pure addiction, its Gang Of Four soiled rhythmic tempting alone irresistible and the wiry web of sonic endeavour and vocal nagging Mekons like.

It is just the start of the album’s insane grooving and rhythmic baiting with the following Dracula Pukes revealing its own nest of creative vipers as cutting scythes of guitar and punch happy rhythms challenge and enthral for a mere fifty seven seconds; a gripping minute of cantankerous confrontation leading to the virulently infectious stroll of Ham Planet. Like Pere Ubu on steroids as Turbogeist writhes under the punk influence of The Fall, the track dances with pop infused boisterousness though every swinging movement of its creative hips comes with seductive venomous intent as Wise declares his vocal desires.

The exceptional Burn Baby keeps the lust hungrily burning next, its lo-fi canvas a tangle of steely petulant grooves, intimately flirtatious beats, and crabby bass groans as vocals install their own brand of psyche trespassing persuasion. It is aural corruption leaving a lingering touch though Witch Fingers straight after soon steals all attention. With we assume Freeman taking vocal lead, the track is like a demented fusion of Daisy Chainsaw and The Fire Engines, off kilter toxic melody and dancing vocals uniting in an adult nursery rhyme like trespass of sanity.

With seductive danger to its cartoonish and creative loco, Gotham Piper lures the listener in next, continuing to lay a certifiable creative hand on the senses before intermittently uncaging its inner meshuga in ferocious style. The Cardiacs comes to mind within the thrilling encounter, Mark E. Smith and co even more so in successor Cat Curfew though once more as Wise lords over his own weave of sonic wiring and the rhythmic union of Crook and Freeman, Frau Pouch imprint only their own uniqueness.