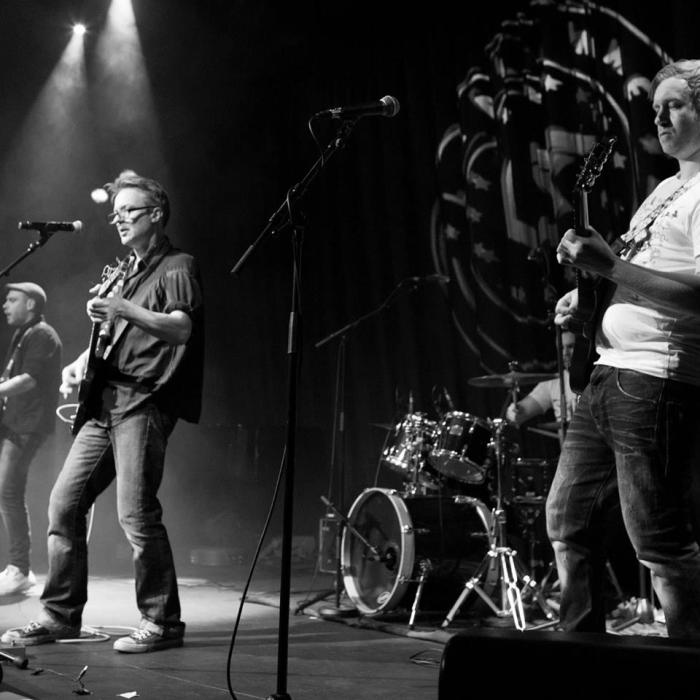 Hailing from Surrey, LaFlamme is a punk ‘n’ roll fuelled band about to release charity single, Broken Hearted Sons, to raise funds and awareness for Muscular Dystrophy UK. It is a three track offering of instinctive and anthemic rock ‘n’ roll which, without fuss, pleases ears and sets attention the way of a great cause.

Formed in 2013 as floods and storms engulfed their home county, LaFlamme consists of guitarist/vocalists Richie Lambert and Kieron Robathan, drummer Dan Motchman, and bassist/vocalist Ditch. Breeding their sound and songs upon inspirations from the likes of AC/DC, The Ramones, Lou Reed, Blink 182, and Biffy Clyro, the band found itself headlining the Surrey Advertiser stage at Guilfest in 2014 and soon after playing support to bands such as The Ramonas and Sex P****Sed Dolls, as well lighting up a host of leading venues across the south east of England. A self-titled

EP awoke further attention whilst the past few months has seen LaFlamme working upon Broken Hearted Sons in aid of Muscular Dystrophy UK; a release inspired by two of Kieron’s cousins who have muscular dystrophy and “have been such an inspiration to do what you love and never give up doing it.”

Broken Hearted Sons is the lead track; a rousing slice of rock ‘n’ roll which, from a subdued yet potent opening, uncages a torrent of rolling rhythms, spiky riffs, and sonic enterprise which simply flow with punk rock infectiousness. It is an undemanding but seriously catchy offering quickly whipping up involvement in feet and spirit, not forgetting an eager appetite for the band’s unassuming but magnetic sound.

With a whiff of Eddie and The Hot Rods to it, the track makes way for the more classic rock scented Breaking In. It’s initial hook and character has a Bowie-esque hue to it whilst further into its melody entwined body, a Thin Lizzy like flavouring colludes with the restrained but vibrant rock ‘n’ roll lighting up the ears.

The closing romp of Liar is similarly textured but soon reveals its own mischievous imagination and boisterous punk ‘n’ roll endeavour. Rhythms alone are a spark to keen physical involvement, eagerness only reinforced by the tenacious vocals and sonic exploits of the guitars.

All three tracks provide honest slices of perpetually enjoyable rock ‘n’ roll; straightforward uncomplicated proposals which get the job done whilst providing thick satisfaction. The fact they are raising funds and awareness for a very worthy cause only thickens the pleasure.