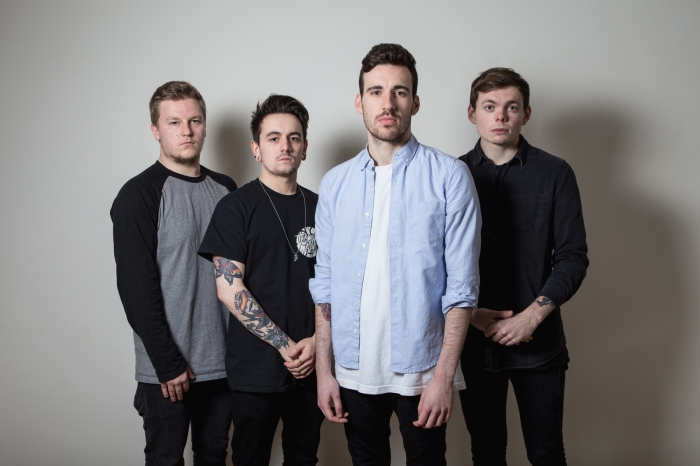 Blood Youth hold nothing back on their new EP; their passion, fury, and intensity is fuelled to the top and going for the jugular. To that, the UK metallers also add some imaginative invention and snarling contagiousness to create one attention grabbing incitement.

The Closure EP is four tracks of punk driven metal seemingly unleashing, lyrically and physically, a pent up heart and ire. The successor to the well-received Inside My Head EP of last year, it emotionally carries on from its predecessor with guitarist Chris Pritchard recently saying about the release, “Our debut was a lyrical meltdown. It expressed the issues Kaya (vocalist Kaya Tarsus) has had for the past six years in a way he hadn’t been able to show until the band started. With this new E.P – Closure – it’s about what he once felt coming to an end. And for all of us this EP is literally closure for the personal anxiety we all felt while writing Inside My Head. The whole thing was a recovery process…Full circle.” That unleashing of emotion is an open roar backed by a sound which equally builds on its predecessor and subsequently leaves it in the shade through its voracious and creative enterprise.

Recorded, as the first EP, with producer Jonny Renshaw, Closure opens with the calm yet agitated Breathe. Its brief body is a melodic coaxing of guitar and keys with the potent vocal caresses of Tarsus laying out his emotive reflection. Around it though is a tension, an underlying almost portentously melancholic air which erupts in full rigour within the following 24/7. A vocal roar sparks a stalking of the senses by predatory beats and grievous yet buoyant riffs. They do carry some restraint which is quickly thrown off once Tarsus vents with impressive expression and vocal dexterity as the rest of the band spring an inescapable web of creative animosity and temptation. On the surface, the Blood Youth sound does not strike as being overtly unique yet from a salacious bassline and the irritability of vocals, which seem to transfer their spikiness into the hungry sonic enterprise, band and song show themselves to be something imaginatively distinct and pleasingly volatile.

The song continues to twist and turn, bruising and badgering the senses whilst gripping ears with a fierce engagement of bold ideation; qualities and success continuing in Mood Swing. Living up to its name, the track is a torrent of predacious grooves and lethal hooks aligned to barbarous rhythms yet at a slip of a note becomes a melodically catchy and warmly engaging enticement of seriously catchy rock ‘n’ roll. The track is superb, Blood Youth creating the kind of slavery ears long for and the type of song which pushes bands into major spotlights.

The EP closes with its title track, the song also the new single/video from the band. Bred from the same template as the last track, it offers a warm melodic hand initially with the voice of Tarsus again impressing with its mix of clean and hoarse deliveries. Though it is easy to see why it was chosen as the lead track with its anthemic roars, it does lack the extra creative spark of Mood Swing for personal tastes yet leaves ears and emotions invigorated and hungry for more.

Blood Youth have leapt on in style from their last highly enjoyable release. If In My Head was a call to arms, Closure is a declaration of war on dark times and thoughts announcing the Harrogate band as another potential soaked and exciting proposition to add to the watch very closely list.

The Closure EP is released March 11th physically and digitally via Rude Records.