Blood Youth hold nothing back on their new EP; their passion, fury, and intensity is fuelled to the top and going for the jugular. To that, the UK metallers also add some imaginative invention and snarling contagiousness to create one attention grabbing incitement.

The Closure EP is four tracks of punk driven metal seemingly unleashing, lyrically and physically, a pent up heart and ire. The successor to the well-received Inside My Head EP of last year, it emotionally carries on from its predecessor with guitarist Chris Pritchard recently saying about the release, “Our debut was a lyrical meltdown. It expressed the issues Kaya (vocalist Kaya Tarsus) has had for the past six years in a way he hadn’t been able to show until the band started. With this new E.P – Closure – it’s about what he once felt coming to an end. And for all of us this EP is literally closure for the personal anxiety we all felt while writing Inside My Head. The whole thing was a recovery process…Full circle.” That unleashing of emotion is an open roar backed by a sound which equally builds on its predecessor and subsequently leaves it in the shade through its voracious and creative enterprise.

Recorded, as the first EP, with producer Jonny Renshaw, Closure opens with the calm yet agitated Breathe. Its brief body is a melodic coaxing of guitar and keys with the potent vocal caresses of Tarsus laying out his emotive reflection. Around it though is a tension, an underlying almost portentously melancholic air which erupts in full rigour within the following 24/7. A vocal roar sparks a stalking of the senses by predatory beats and grievous yet buoyant riffs. They do carry some restraint which is quickly thrown off once Tarsus vents with impressive expression and vocal dexterity as the rest of the band spring an inescapable web of creative animosity and temptation. On the surface, the Blood Youth sound does not strike as being overtly unique yet from a salacious bassline and the irritability of vocals, which seem to transfer their spikiness into the hungry sonic enterprise, band and song show themselves to be something imaginatively distinct and pleasingly volatile.

The song continues to twist and turn, bruising and badgering the senses whilst gripping ears with a fierce engagement of bold ideation; qualities and success continuing in Mood Swing. Living up to its name, the track is a torrent of predacious grooves and lethal hooks aligned to barbarous rhythms yet at a slip of a note becomes a melodically catchy and warmly engaging enticement of seriously catchy rock ‘n’ roll. The track is superb, Blood Youth creating the kind of slavery ears long for and the type of song which pushes bands into major spotlights.

The EP closes with its title track, the song also the new single/video from the band. Bred from the same template as the last track, it offers a warm melodic hand initially with the voice of Tarsus again impressing with its mix of clean and hoarse deliveries. Though it is easy to see why it was chosen as the lead track with its anthemic roars, it does lack the extra creative spark of Mood Swing for personal tastes yet leaves ears and emotions invigorated and hungry for more.

Blood Youth have leapt on in style from their last highly enjoyable release. If In My Head was a call to arms, Closure is a declaration of war on dark times and thoughts announcing the Harrogate band as another potential soaked and exciting proposition to add to the watch very closely list.

The Closure EP is released March 11th physically and digitally via Rude Records.

It is impossible not to be strongly impressed by the debut EP from US rock band For The Life Of Me. Consisting of four striking and extremely well-crafted tracks, the Closure EP is an invigorating and vibrant confrontation of melodic punk and angst dripping rock brewed into an impacting and passion drenched fire of intent. From start to finish the release captivates and provokes for the strongest rewards and though For The Life Of Me feels like a band still discovering their distinct voice it is hard to remember many bands from their sphere of sound and style which has impressed as strongly with their introduction.

From Portland, Oregon, For The Life Of Me began with four friends, all from different musical backgrounds who came together when their previous projects and bands ended or disappeared into the horizon. Using their distinctly varied influences the band began writing and creating in the winter of 2009 through to the opening of the eyes of 2012. Choosing a quartet of songs the band finally got down to recording for an EP with Stephan Hawkes (Vanna, Closure In Moscow, Red Fang) at Interlace Audio in Portland. Soon after though, two members of the band Ray Canarios (vocals/ guitar) and Dan Hargadine on (drums) left leaving the other half of Austin Davis (guitar) and Jeff Galusha (bass)to resist the project being another failed venture and working on ideas as they looked for replacement blood. Finally with a line-up of vocalist/guitarist Lee Parks and drummer Chris Forrette alongside Davis and Galusha, the band is ready to unleash its pent up creativity and frustrations with the release of the Closure EP. 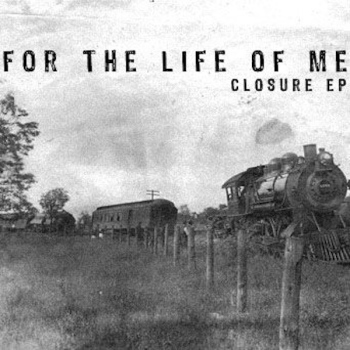 acidic groove which invites investigation. The vocals powerfully sculpt the narrative and its passion to enhance the already brewing drama of the sounds further. Strongly impressive the vocals ignite sparks within the compelling songwriting and imaginative melodic flames which flicker and burn with varying intensity and inventive breath. The lead track from the release, the song is a stirring and inflammatory trigger for the passions and emotive thought and almost alone ensures a determined interest in the future of the band.

The following TV In My Head, Part II like the first has no fear in gripping the listener with instantly powerful sounds and emotive energy. Less riotous and urgent than its predecessor the song raises the intensity with a thick passionate atmosphere and potent heart borne sonic aggression which in many ways reminds of Billy Talent. Moving into a melancholic aside with the bass resonating deeply and the guitar crafting little incendiary melodic flames, the song is an enthralling and intriguing piece of composing and imagination if over long in its second half instrumental journey towards the final anthemic finale.

Winter Sleep is a tempest of harshly squalling vocals and tight caustic yet dazzling guitar sonic craft within an abrasive but tempting invention and honed melodic breath, and though the track does not quite live up to those before it, there is still a persuasion which grips tightly and lingers from the song.

The closing and irresistible Sung Out of the Blue brings Closure to an impacting and thrilling end, its towering vocal and melodic ferocity of passion and personal incitement a deliciously seductive and stimulating meeting between song and feelings. The track alone sums up the whole EP, a precisely but instinctively carved intoxication of melodic enterprise and passionate invention. Recommended for fans of the likes of Brand New, Make Do and Mend, and Balance & Composure by their bio it is hard to disagree but add as mentioned Billy Talent as well if not exactly for the sound but the passion. For The Life Of Me is still a work in progress but from the excellent Closure alone have set themselves up as a very exciting and promising prospect.