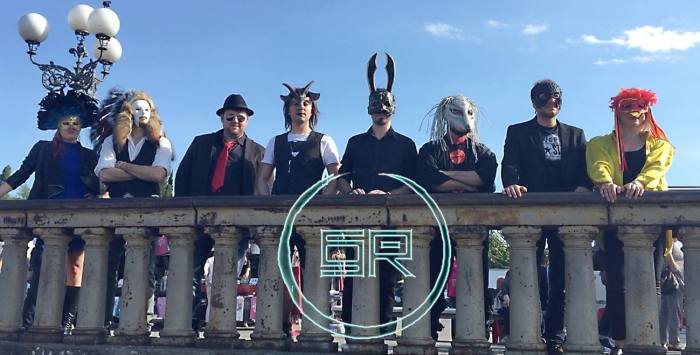 In reference to its mix of sound alone, Cocktail is the perfect name for the new album from Tuscany hailing progressive funksters Sushi Rain. It is an energetic and imaginative maelstrom of flavours and styles across twelve tracks as individual to each other as they are united in unpredictable adventure. It is at times also as intoxicating as its namesake and even in moments where personal tastes do not connect as fully as in other moments, a lack of enjoyment is never an issue.

The beginnings of Sushi Rain go back to Italian hard rock band Valentine and its remaining four members around 2008. A band inspired by the likes of like Extreme, Gun’s Roses, Living Colour, and Faith No More, it had already begun incorporating main elements of funk and cross-over to create a distinctive sound. Soon the line-up of songwriter/lead guitarist Francesco Bini, vocalist Matteo Carrai, rhythm guitarist Stefano Maestrelli, bassist Saimon Sieni, and drummer Francesco Micieli pushed further forward with this evolving sound though across the following year a host of changes ensued. 2009 saw the departure of Maestrelli and Sieni, a name change to Sushi Rain, the beginning of the recording of a debut album, as well as the addition of firstly bassist Davide Biondolillo before Marcello Arena took over and also keyboardist Alessandro Biondi and alto saxophonist Alessio Crocetti.

First album Breathless appeared in 2011 to good responses from fans and media alike, it backed by successful live adventures across Italy and into Europe over the following year. More changes saw Crocetti leave the band during the start of creating their second album, to be replaced by Florence based American saxophonist and blues-soul vocalist Nadia Koski with a pair of backing singers in Giada Secchi and Sandro Toncelli also joining up. Completed earlier this year, Cocktail is the captivating refreshment emerging from the ‘fun’ of the previous few months and something for all to find some feel good tonic in. 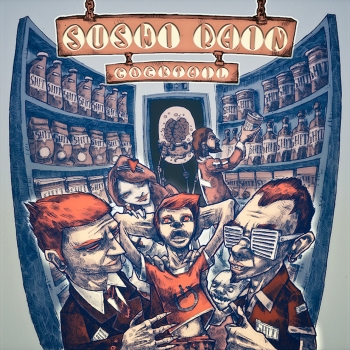 The album opens with Pop yoy pay, a slither of an introduction certainly awakening ears with its fun drama of bad entertainment being disposed of for the funk revelry of Sushi Rain and first song proper, Bunga Bunga. The second track is instantly inciting feet to shuffle and hips to sway, riffs and hooks as inviting as the flames of sax and the theatre of vocals already whipping up the imagination. Straight away as the infectious encounter tempts further involvement, essences of bands like Extreme and Red Hot Chili Peppers, and maybe a touch of Mr Bungle, are a spicy pleasure but only essences in a recipe already emerging as distinct to the band. It is a great true start to the album, a devilry to get all funked up with.

The following Why? similarly has the body involved with its tangle of tangy grooving. Its pop funk prowess is a virulent persuasion driven by a great mix of vocals across the band and a rhythmic enticing as catchy as the sparkling hooks and mischief within the incitement. Keys layer psych seduction and imagination into the mix too, another flavour colluding with equally captivating jazz enterprise and pop rock tenacity as the song reveals more diversity within Cocktail. This kind of variation is a perpetual lure within the album and continues in varying degrees in the reflective croon of One last night in Philadelphia, an emotive hug of melodic rock and the boldly simmering tango of Pillows. Neither track quite match up to the previous pair but both create a web of invention and unpredictability that has ears and appetite a little greedier. In many ways Sushi Rain is like a funk/classic rock version of Russkaja or Kontrust; a band twisting a horde of diverse flavours and textures into something instinctively different and invigorating to most things around them.

The smoky beauty of March of groove comes next, its noir lit climate a sultry seduction with jazz bred scenery enclosing rich blues rock tempting whilst the melancholy hued Free brings a compelling calm with its heart bred croon. Acoustic guitar provides a tender hand on ears but it is the superb blend of vocals across Carrai, Secchi, and Toncelli which steals the show. Both songs, and especially the latter leave a richer pleasure and want for more in their wake, a hunger fed by the excellent fiery roar of Jesus cries from your eyes and the melodic romance of It’s time to believe. The first of the two is a boisterous bundle of hooks and grooves bound in electronic imagination and sonic flirtation, matched and at times eclipsed by the brass enterprise of Koski, whilst its successor is a sublime summers day of reggae riffs and grooving aligned to Caribbean temptation and a feel good tonic of vocal and smiling melodies.

Things get dirtier and rock ‘n’ roll with Sushi Rain can’t write a single next, the song a grooved stomp with contagious attributes from start to finish, though for these ears it does lack that final spark and invention to rival earlier treats. There is no escaping some gorgeous twists and elements inside it though as too within the outstanding Brain drain. Like Oingo Boingo meets King’s X, the track is a bubbling infestation of body and soul sculpting another lofty high within Cocktail before the album drifts off with mellow charm in to the sunset via One.

It is a captivating close to an album which just gets more persuasive and enjoyable with every listen; even within this review and another simultaneous listen, Cocktail has grown again. For some this could be an album of the year contender, for others a pleasure to pass through now and again but for all, Sushi Rain is a proposal sure to leave ears and emotions feeling good.