Still basking in the roar of their Phantom High EP, ears get another tasty slice of The Senton Bombs through their new single Mainstream. Taken from the UK rockers’ forthcoming fourth album Mass Vendetta, the track is a slice of dusty blues rock ‘n’ roll with the recognisable Senton Bombs sound and spice woven into an even richer tapestry of diversity and enterprise.

For fans of a band formed in 2004 as The Terrorists and with since a trio of acclaimed albums under their belts, Chapter Zero of two years ago their most potent in praise and success to date, Mainstream holds no surprises in its craft and easily infectious character but as the Phantom High EP earlier this year, it is pointing to a broader rock heart to the band’s sound which we can expect to see blossoming further in Mass Vendetta. Certainly the song has that punk air that the band always carries but as in songs like Black Chariot and Passions of the Passive Aggressive previously, a spicier bluesy nature is breeding in the band’s songwriting and imagination. 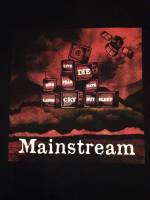 Mainstream opens on a thumping anthemic rally from drummer Scott Mason, his swift inescapable bait the trigger to tangy grooves spun by the guitars of Damien Kage and Johnny Gibbons. It is a heady flame igniting ears, the darker tones of Joey Class’ bass just as magnetic as he quickly brings his familiar and welcome vocal tones to the emerging swagger of sound. Riffs and hooks continue to collude with the grooved tendril infusing melodic intoxication to the track, whilst slips into varied hues of rock ‘n’ roll only add more appealing theatre to the increasingly tempting adventure and contagion spun by the band.

On the first listen, Mainstream seemed to lack something compared to the likes of previous recent singles Phantom High and Lights Over Phoenix, but that thought was quickly banished as each listen turned the song into one seriously voracious and infectious persuasion…Now on to the album.

Mainstream is released October 23rd via Holier Than Thou Records.