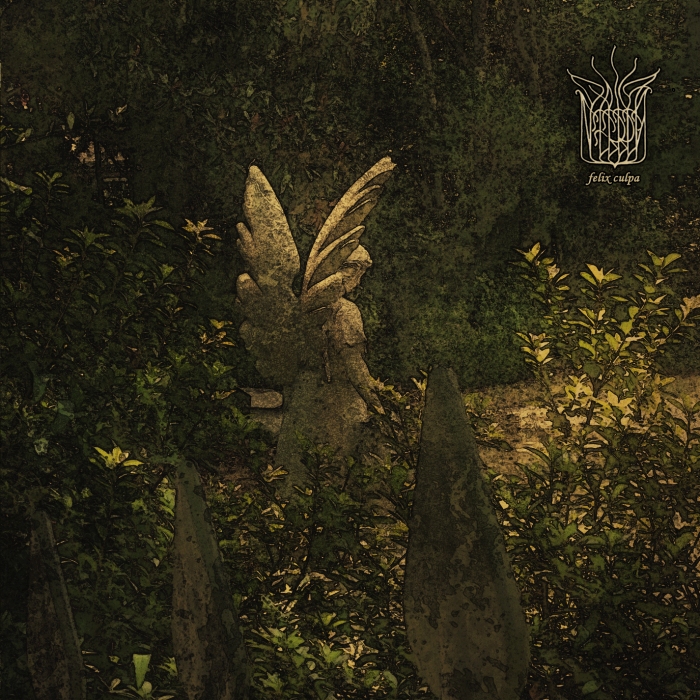 An album impossible to fully digest on the first listen, second, and indeed even a few more, Felix Culpa still quickly emerges as one richly fascinating and perpetually tempting proposition. The creation of US based Dalla Nebbia; it is a compelling assault of extreme metal and imagination. The band’s sound is loosely tagged as atmospheric black metal but as Felix Culpa soon reveals, it openly embraces provocative strains of progressive rock and doom metal to present something testing and uniquely enthralling.

Dalla Nebbia first emerged in 2010 as a duo, and now is a quartet with three members living in N Carolina, Minnesota, and Washington, and a fourth with Brazil as a home. Inspirations include music and invention produced by bands such as Agalloch, Nachtmystium, Limbonic Art, and Arcturus, the foursome taking these into their own extensive and epic weaves of emotional and sonic drama. The successor to debut album The Cusp of the Void, it the bringing together of the band’s first demo and self-released EP Thy Pale Form, the ten track Felix Culpa sees the band breaching new depths and levels of imagination and craft. Its premise is a dive into the human psyche, in the words of the band, “a journey through decay and regret, death and suicide, and thorny despair at the hands of an angry god” and its voice a challenge to find a wealth of corruptive pleasure in.

Featuring Norwegian violinist Sareeta (Borknagar, Solefald, Asmegin) across most songs on the album and guest guitarist Aort (Code, Indesinence) on a couple of tracks, Felix Culpa opens with the brief instrumental Memento Mori; the synth and guitar craft of Yixja a swift and entrancing immersion for ears and thoughts. Warm yet feeling more like the lull before the storm even with the magnetic lures of violin, the piece leads the listener straight into the tempest of Until the Rain Subsides, though that too initially has a restraint and gothic invitation that only entices. The raw vocal squalls of Zduhać add to the thick atmosphere and brewing imposing air of the song even with both being tempered by the captivating harmonies that rise within the melancholic beauty of Sareeta’s strings. Ravenous and seductive in equal measure, blackened voracity and progressive calm colluding in a controlled band unpredictable maelstrom, the song makes an impressive full welcome into Felix Culpa.

The more rabid Abandoned Unto Sky takes over next, the brutal drumming of Alkurion a quick violation forging a punishing union with raw unrelenting riffs. In time though, as the bass of Tiphareth spills its own animus on proceedings, song and band infect the storm with melodic and emotive enterprise whilst managing to simultaneously intensify the ruinous nature of the track. Every moment has something within something else, layers within layers, textures revealing their own personal breakdown of essences as the song evolves and twists on its rancorous spine. Growing more riveting and thrilling in its second half, the song epitomises the album as a whole, each minute a bounty of imaginative turns and detours seamlessly woven into fierce tapestries that with every listen unveil new treasures.

Both Lament of Aokigahara and The Banner of Defiance keep ears and emotions aflame, the first from a portentous coaxing venturing into a dank incantation like crawl through smothering intensity and ambience with volatile invention and beauty respectively. Guitars entwine with keys, synths with the melodic incitement of the violin, and rhythms in tender and barbarous skill framing the tempestuous charm and adventure of the track. Its successor is similarly honed but far more physically challenging with its vindictive rhythms and riffs, not forgetting breath. Of course things shift and evolve, the song also slipping into spellbinding moments of vocal and sonic radiance, these at times stemming the tide of hostility like momentary oases in a challenging journey whilst providing their own fresh exploration of the lyrical and emotional exploration. As in its predecessor, it is thoroughly engrossing though occasionally heavy going trying to explore all on offer but with time the songs just get bigger and more impressive as they eventually share their extensive realms.

Not Within the Stone blows a creative wind washed in post and progressive rock daring around a black metal scowl. This gripping fusion smothers a doom seeded gait but by now expectantly also embraces bold flames of contagious hooks, virulent grooves, and inhospitable intensity into the creative melting pot to heavily pleasing effect. Once more ears and thoughts are bullied and rubbed raw whilst kept firmly engrossed in the uncompromising collusion of contrasts that also emerge in the outstanding Felix Culpa (Theodicy Corrupted), a smooth seducing ingrained in a ferociously ravishing volcano of sound and enmity.

The shorter instrumental trespass of Das Gelächter Gottes is a cold dystopian respite next, luring the imagination towards the opening melancholic serenade of Paradise in Flames. A fire of emotional and sonic unrest, the track restrains from erupting into the inferno expected, seven of its nine evocative minutes having passed to inspire and incite before things spew vocal and physical lava, though that again comes with the spellbinding touch of the violin and Dalla Nebbia’s creative bravery to leave only a want for more.

A final instrumental caress closes the album, The Silent Transition a melody driven kiss on the senses wrapped in ever potent shadows and shaped by the open individual prowess of Dalla Nebbia. It is a fine conclusion to a release words barely scratch the surface of. Felix Culpa will not be for all, at times being a real test for many including some black and extreme metal fans, though only in a good way. Fair to say though for all wanting something bold and original which pushes their boundaries as much as the music they have a passion for, a release that works their bodies and thoughts for a constant unveiling of new rewards with each plunge into its depths, then Felix Culpa and Dalla Nebbia is very worthy of a visit.

Felix Culpa is out now via Razed Soul Productions @ http://dallanebbia.bandcamp.com/