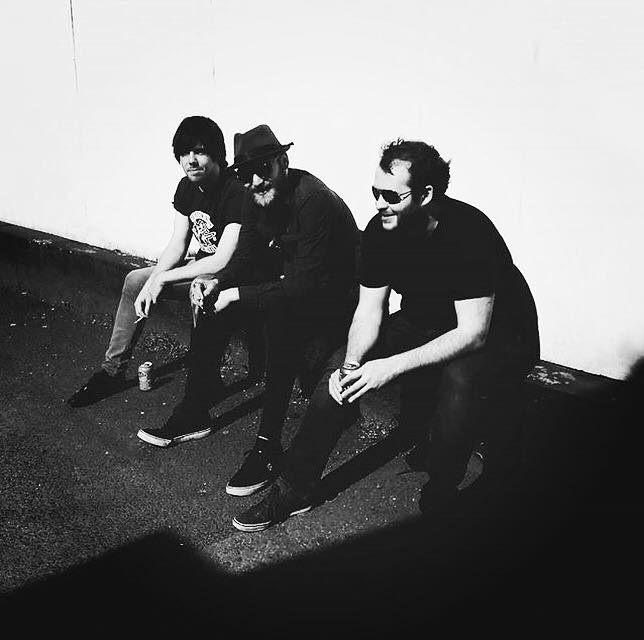 Having just been introduced to former Thirteen Shots frontman Johnny Rose’s new project in Blast Bomb we now have the new endeavour from its guitarist Lewis Manchip for you. That proposition is Mammoth Temple and they have just released their rather appetising debut EP, We’re Not Extinct. Echoing the band’s name in many ways, it is a lure of heavy boned rock ‘n’ roll worshipping the seduction of the groove and the growl of the riff, a fuzz rich proposal caked in the dirt of grunge and veined by stoner bred tendrils of melodic suggestion. It is also a potent introduction to the band and one which gets more compelling by the second.

Formed by Lewis and vocalist/bassist Dave, Midlands hailing Mammoth Temple is completed by the thunderous swings of drummer Ben. Initially taking their time to hone their sound, the trio have emerged with a live presence which is swiftly luring keen attention and plaudits, and now with a first release which is as thick in potential as it is already flourishing prowess and enterprise.

It opens up with Meat Promotion and instantly entangles ears in a flavoursome groove. With robust rhythms and throbbing bass that beginning is a sign of things to come in song and release. The blend of mellow vocals adds to a Queens Of The Stone Age like hue to the grunge meets heavy rock stroll of the track, the guitar continuing to cast wiry grooves and melodically sharp bait for ears and appetite to get hooked up on. It is a seriously infectious and captivating start which is more than matched by next up Wiping Out. Its psych rock kissed entrance is pure temptation, the skirting shadows intrigue against the vocal prowess of Dave and Lewis’ expressive melodies. With fiery flames igniting across its catchy gait and imaginative body, the song continues to blossom in imagination and craft. It might not be boldly unique but the song as the EP has a freshness and adventure to it which hints of such success ahead.

The mellower caress of Reflections is courted by the great dark shadowed throb of bass and volatility in Ben’s beats which never erupts but magnetically stalks the melancholic beauty of the song’s heart and touch. A song which just grows over time and listens, it brings another enticing aspect to the Mammoth Temple sound which only grows when the track does uncage its muscle.

The EP is concluded by firstly Promises, a distant rumble increasingly consuming ears as it looms closer and incites the imagination as blues rock ivy clings to its tenacious body and scuzzy skin. Another grower, it does not quite match up to those before it yet lingers in the memory with ease through its Jesus and Mary Chain meets Alice In Chains glaze alone.

How We Are completes the pleasure, it needing mere seconds to hook the appetite with its initial Soundgarden-esque melodic coaxing. From there, its simmering fire grows and intensifies with psych and stoner rock winds blowing across its rhythmic kindling and harmonic haze. As ever, there is a darker hue to its depths and emotion contrasting superbly with its brighter easily invited trespasses. The song is superb, a big end to a fine first union with Mammoth Temple.

It is early days but the signs are already hinting at a potent future for the band and rich adventures for us all alongside.

We’re Not Extinct is out now and available@ https://mammothtemple.bandcamp.com/album/were-not-extinct

Like Loading...
‹ The call of the unnatural: exploring The Time Framed
Embraces from the heart: talking with Charly&Faust ›