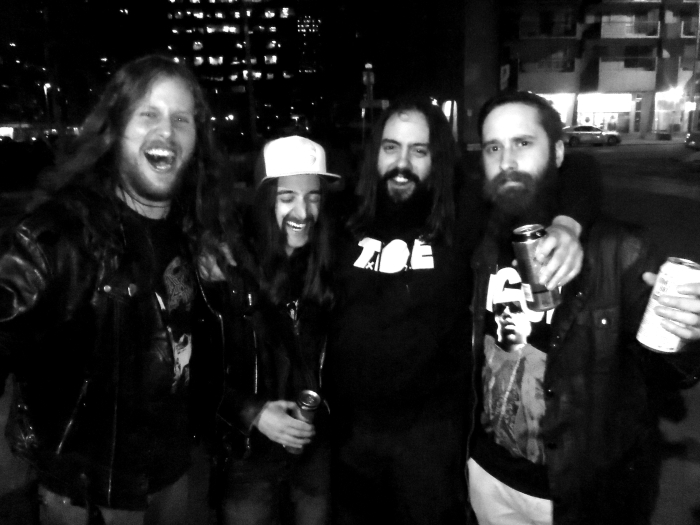 As Nest of Vipers, the new EP from Canadian metallers False Flag ravages air and ears you can almost feel the body’s sinews being stretched to their limited and the psyche being devoured by the fierce enterprise fuelling the incitement. The release is an attention grabber, a confrontation unleashing a mix of sonic invention and fearsome physical confrontation, and ultimately one thoroughly satisfying adventure.

False Flag was formed in 2012 by vocalist/guitarist Russ Gauthier (Lordosis, Meggido, We Found The Body) and drummer Nick Purdy (Meggido) as a side project to their other projects. Bassist Garrett McElroy (AfterEarth) soon joined the band with first EP Orobas being recorded not long after. Once Dan Ishak (Meggido, Stinger) subsequently linked up with the band on bass, McElroy leaving to concentrate on AfterEarth , the band set about recording their eventually well-received debut album Suffer In Silence in 2014. Alongside all this, the band live has equally been earning a rich reputation for their hellacious assault on the senses and stirring stage craft, a potency which seemingly has been translated into their new release, such its live like fury. With a line-up of guitarist Mike Harach and drummer John Byskal now alongside Gauthier and Ishak, False Flag are setting a new benchmark for themselves with their four-track incitement, the Garrett recorded and Sacha Alan Laskow (Every Hour Kills) mastered Nest Of Vipers, a thick poke at broader spotlights. 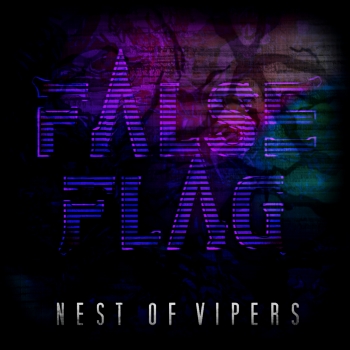 False Flag is frequently compared to Meshuggah and in the past that was probably a more relevant comparison but as opener Sacrifice Of Solitude shows alone, any likeness is a mere passing spice in a recipe which entwines varied flavours of extreme and groove lit metal. The first song emerges from a stark landscape blown over by a desolate sonic wind. It is an evocative entrance which is quickly immersed in rabid riffs, vicious rhythms, and already toxic grooving. With the rapacious vocal scowling of Gauthier spewing antagonism with every raw syllable, the track is soon a venomous trespass of the senses but in turn speared by melodic tendrils of searing guitar and a bruising but inescapable swing sculpted by those ever inviting grooves and the throaty bass of Ishak. It is simply a predator and one compelling and thrilling start to the release.

The sonic tapestry of Perfidious squeals and leers over the senses next, its initial acidity swiftly joined by infectiously groaning grooves and vocal antagonism. There is a definite Pantera grizzle to the song, the half clean/half raw tones of Gauthier a bear hug in the tempest of sound and becoming even more impressive when exploring an almost completely clean delivery later on to add further captivating texture. All the time riffs and rhythms constantly gnaw away at ears whilst the guitars spin an intoxicating liquor of melodic imagination to capture that of the listener.

Another venture into an imposing ambience brings Reversion Of Sin into view, this time a cavernous immersion of heavy shadows which subsequently give birth to a bestial stroll of malevolent riffs and piercing beats. Vocals also bring a savage intent with their guttural intimidation whilst the brutal body of the track savages whilst wrapped in classic/heavy metal and progressive seeded endeavour. The mercilessly heavy corruption from the song is delicious but personal tastes failed to find the same appetite for its melodic side and its fusion into the barbarous body of the still enjoyable track. It really is just taste dictating reactions as once again there is no escaping that band and song spew craft and adventure.

Nest Of Vipers has body and emotions back rocking with its title track, a mighty closer with crushing rhythms, insatiable riffs, and grooves which simply flirt with primal instincts. The best track on the EP, it is a maelstrom of physical predation, and sonic bedlam cultured into something superbly designed and as virulently enticing as the great varied vocals frequenting the song. A mixture of Bloodsimple and Lamb of God, Down to The Faceless rear their suggestions across the song but as in all tracks within Nest Of Vipers, what emerges is something not solely original but far more False Flag than anything else.

False Flag is a band knocking on metal’s global door with Nest Of Vipers it is fair to say; if it succeeds in unlocking that door time will tell but if not it is one enjoyable step towards that easy to suspect destiny.

The self-released Nest Of Vipers EP is available from August 4th @ http://falseflagmusic.bandcamp.com/album/nest-of-vipers