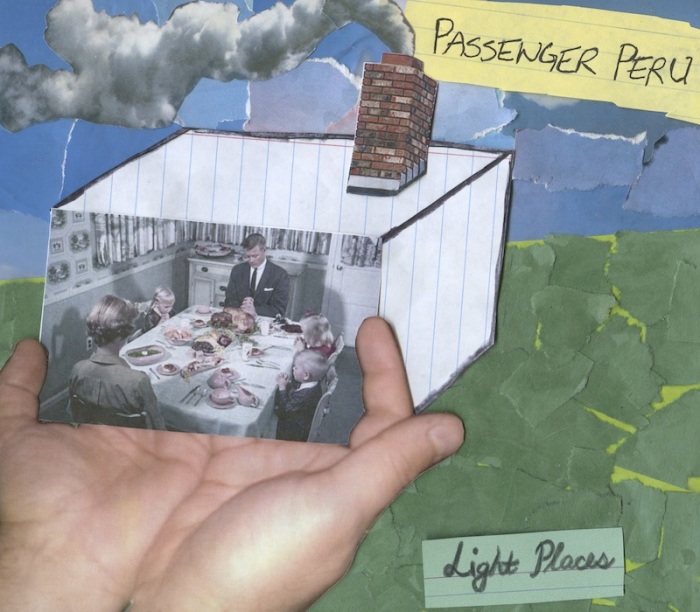 The acclaimed self-titled debut album from US duo Passenger Peru was quite simply inventive pop in its rawest and most compelling form. Released at the dawn of 2014, it instantly pushed the Brooklyn band if not into a category of its own, certainly on to a loftier perch than most other pieces of melodic exploration. Now the pair of Justin Stivers and Justin Gonzales returns with its successor Light Places, venturing into arguably even less polished but increasingly fascinating realms of invention and sonic weaving across its enthralling majesty. The album peers into new and at times darker places in the creativity of the band and the emotions of the listener, but never moving too far away from the melodic imagination and psyche seducing mesmerising which marked so impressively their debut.

Shadows have been a constant flirtation and temper in the music of Passenger Peru, but upon Light Places there seems a stronger contrasting of light and dark elements musically and emotionally. From the emotive lyrics through to the unpredictable tapestry of sounds, the release embraces the intimate warmth and cold of life, colouring them with a maze of inventiveness which at times almost borders on the warped and constantly leaves ears and imagination yearning for more. It is a gripping persuasion which starts from opening track House Squares and never relents across an ever twisting range of sounds and expressive atmospheres until the last sigh of the album’s final note. The opener immediately flirts with ears through a vibrant rhythmic dance which is soon courted by sober yet bright melodies from guitar and bass alike. There is haziness to the song too, but only a thin veil over the imaginative warm weave of melodic colour, concentrating more on the effect wrapped vocals. The song never deviates from its compelling repetitious stroll, simply adding new sounds and colours to the mesmeric tempting ensuring a fascinating start to the album.

It is a constant intrigue which is given more to ponder and explore with the charming Friends Don’t Call, a song which from a gentle soothing touch, boils and grows into a tempestuous vocal and musical climax. It has ears engrossed and imagination bewitched, each especially seduced by the dark throated bassline which grouchily pulsates through the song’s increasingly bedlamic climate. Already the album is showing darker tendencies in its nature and exploration compared to the last album, but also a ridiculously addictive invention which erupts in full ingenuity for The

Best Way To Drown. The first track revealed from the album just before its release, the imperious incitement is an instant dance of rhythmic devilry and tenacious strumming, elements forging together the pathway to powerful and climactic crescendos throughout the song’s landscape. Alongside vocals croon with a seductive sway whilst the nimble fingers behind guitars and bass sculpt a potent drama for the picturesque acoustic scenery, the latter showing a breeze of XTC and Slug Comparison in its radiance. The song is quite gripping, forging a new pinnacle in the album which is matched occasionally and worried constantly by the remaining encounters within Light Places.

Placeholder engrosses thoughts next, its Beatles-esque simplicity a rich lure which is at times buffeted and swallowed by a bedlamic tempest of noise and intensity; further contrasts strikingly conflicting with and complimenting each other. The pleasing flame of the song is surpassed by another major album peak in the fuzzy shape of One Time Daisy Fee. A touch of Melvins flirts from within its scuffed up invention, but also moments of folkish mischief and punky irreverence, all transforming a great adventure into a moment of brilliance.

Both the angular pop tantalising that is Break My Neck and the transfixing Failing Art School leave ears smiling and appetite greedy. The first manages to be a little clunky and simultaneously velvety in sound and touch whilst the second, which is predominantly an instrumental stroll through a visually melodic landscape of possibilities and emotional mysteries, simply sends the imagination off on its own poetic adventures with new evolutions in the script with every listen. The pair of songs are spellbinding, the latter especially engrossing before the outstanding Better Than The Movies parades its own inspirational ingenuity. Seemingly worldly in its influences and cosmopolitan in its flavour, the track is creative voodoo casting an inescapable spell with rhythmic minimalism within an electronic paint box.

Impossible Mathematics brings a calm back to the festivities; initially at least before its own raw textures and voracious ideation breaks out in varying degrees alongside juicy grooves and corrosive riffs as appetising and frequent as comforting vocals and sparkling melodies. It is another fresh twist to the flight of the album; its variety unrelenting as the dirtily lined sounds of Crimson Area Rug brings new dark emotions and exploits, and a character which is summed up by a word repeated in the song “paranoid”.

Light Places is brought to a close by firstly the soft and docile yet creatively lively On Company Time and lastly the delicate Pretty Lil’ Paintin’ with its balmy vocals. Neither track has a fire in its belly but both leave a warm glow around the listener which pleasingly relaxes emotions after the rigorous textures of other tracks before them; those contrasts again working beautifully.

Passenger Peru conjures unique embraces and experiences with their music; something already established with their debut album. Now though Light Places takes it to new and in some places intrusive depths; the result being another essential release from the band and a new exciting escapade for the listener.

Light Places is out digitally and as a Ltd Ed cassette via Fleeting Youth Records on February 24th @ http://fleetingyouthrecords.bandcamp.com/album/light-places

Like Loading...
‹ Sara Lowes – The Joy Of Waiting
The exciting video for ‘Insomnia’ from Pryti gets its national release. ›