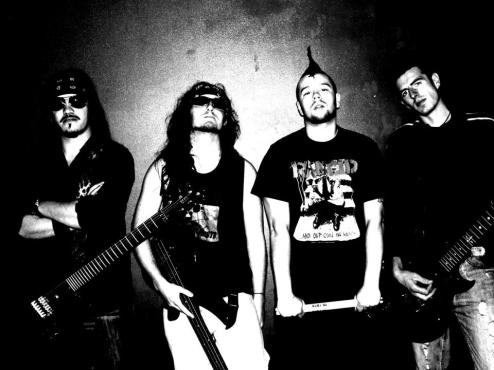 Offering a thrilling and incendiary riot of punk infused rock n roll, Chapter Zero the new album from UK rockers The Senton Bombs is a feisty and rebellious instigator to mischievously party in tandem with. The eleven track album is prime sinewy attitude and inventive urgency with a hunger and passion to match, but most of all it is a thumping great time to swagger alongside and to be undisciplined to.

Formed in 2004 as The Terrorists, the Blackpool based band has grown into one of the best live and energetic forces within British underground rock music, continually improving whilst garnering persistent acclaim and rapidly increasing a fervour driven fan base. Their early days saw the band reach the semi-finals of the largest unsigned battle of the bands in the UK in 2005 followed by the release of their debut record, the five track demo DDT. Well received the release was followed a year later by second demo Death Valley Driver which spawn songs destined for good radio play and appearances on varied compilations. As well as sharing stages with the likes of Epoxies (Fat Wreck-Chords), The Imperial Vipers, One Way System, and C.J. Wildheart and the release of the Crimson Mask demo, the band also went through an unsettled period with line-up changes though they still were unrelenting in laying waste to audiences with their constant hunger to gig. Next release From Parts Unknown received great reviews and feedback in early 2008 though the same year saw another departure to leave the band as a three piece though it had little effect of holding them or their intense work rate back.  With the release of their debut album Sweet Chin Music in 2010, The Senton Bombs a quartet once more, felt a more intense force of acclaim to its release. The foursome continued to gain great plaudits for their explosive shows, headlining and alongside bands like Random Hand, and successful festival appearances, whilst the 2012 album Gambit set the band up as one of the prime punk n roll instigators in the UK. After its release the band took no time in writing and working on third album Chapter Zero, finishing it this past February for a STP Records release which stands as their finest inventive and invigorating moment to date.

The title track kicks things off with muscular riffs scoring the ear, the guitars of Damien Kage and Johnny Gibbons chewing the

senses whilst the firm rhythmic pulses of drummer Scott Mason cage and lead with skilled intimidation. Into its stride the vocals of Joey Class begin to fully incite the emotions whilst his bass throbs and prowls within the already in place raucous encounter with menace and attitude. The song is a stylish mix of the swagger rock of a Wildhearts and the punk fire of a Backyard Babies/Eddie and the Hot Rods union, and leaves the senses hungry and alive for more with ease and accomplished craft.

The potent brawl hands over to the equally contagious stomp of Nothing Quite Like This, a track which stands with crown jewels and posture to the fore and its infectious sounds crawling all over the senses and passions. The track is not overly original but impossibly addictive and leaves the eagerness to enlist in its passion and energy with voice and feet an overpowering lust. There is nothing within the rock n roll debauchery not to like or devour with greed and it continues the immense start of the album with pleasing cockiness.

From the refreshing encounter of Heading For The Guillotine, a song which has a familiar ring to it without revealing the source of that impression, the album explodes into an even more striking and stimulating conspiracy to work on the passions starting with the imaginative fusion of the mellow and forceful that is So Cavalier. The vocals and surrounding melodic whispers smoulder within the testy rhythms and riffing to like most of the album, reveal the strength and variety to the songwriting and its realisation. The following Tornado and No Rest For The Rockin’ rip the skies to grip greater heights, both sharing top honours on the release. The first is a thumping electrified fury of big rhythms, sonic flames, and bass snarls coated in the excellent tones of Class and ignites the strongest inner fires soon copied and surpassed by the brilliant No Rest For The Rockin’. It is punk rock at its best, a song best described as having the infectious cheek of The Undertones, the defiant intent of UK Subs, and the melodic flames of New York Dolls, and an insatiable irrepressible triumph.

Both Reapers Sow and Medusa ensure the exacting power of the album is undiluted, the first a track which initially bewitches with slow soothing vocals and acoustic guitar before burning a hole in the senses with its furnace of energy and the second an avalanche of resonating big boned beats and mischief inciting riffs. After the last thrilling note of the track the album then unexpectantly finds inspiration in American rock sounds and whilst certainly the excellent Darkest Horse, and the closing pair of Acid And Alkaline and The Rider with their hard rock breaths impress and leave nothing but deep satisfaction, they do not quite match the earlier punk enriched glories.

Chapter Zero is nevertheless an exceptional release which no matter how many times it is allowed to infiltrate the ear it and The Senton Bombs leave a breathless and voracious hunger behind.