Uncompromising and ravenously destructive, The Great Red Dragon from Polish death metallers Hellspawn takes no prisoners sonically or in intent. It is an album which ravages the senses with impressively accomplished craft and merciless corrosive energy to leave one exhausted and reeling under its weight of sound. It is also admittedly a release which seemingly refuses to take adventurous avenues within the genre or break down existing ideas into something truly distinct, yet from start to finish it leaves one wholly satisfied and unreserved in wanting to stand before its confrontation time and time again.

Hailing from Wieluń, Hellspawn formed in 2003 and by 2005 with a settled line-up had their first record, Demo 2005 released via Chilean label Infernal Overkil and Nihilistic Holocaust in France, the second as part of a split release. 2010 saw debut album Child of Hell released through Exploratory Drilling Productions to strong responses, reactions which have been surpassed by The Great Red Dragon upon its unleashing via Wydawnictwo Muzyczne Psycho last year. An album apparently heavily influenced by the work of William Blake, it is a release which though having been released last year deserves to be in the awareness of all extreme metal fans. As mentioned it does not offer anything new but the release is undoubtedly a thunderous engagement with sounds derived from the likes of Morbid Angel, Hate Eternal, Behemoth, and Marduk and one which leaves no one bored. 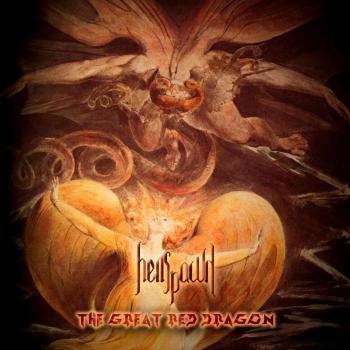 caustic guitar scraping of the ear. It soon collects all its elements for an explosive torrent of crippling rhythms from drummer Robert Kolman and tight cutting riffs from guitarists Marcin Garyga and Daniel Drosiński, whilst bassist and vocalist Mariusz Konieczny unveils the deepest shadows with his intimidating lines and heavy vocal squalls. The track evolves into a maelstrom of sonic guitar mastery and hungry intensity rhythmically and vocally, the heavy growls of Konieczny malice drenched.

The following Word Becomes Flesh continues the formidable start with its own primal violation and sonic torrent of aggression. Like the first, the song ripples with ideas which though not exactly new keep the song fresh and intriguing whilst in its overwhelming company. It has to be said even at this point that once a song departs it is not that easy to remember anything in particular about them when looking back, and that also applies to the album as a whole, but within their tumultuous battle they do not let anyone or any appetite down.

The likes of Hellspawn, Diabolic, and the title track blast the senses and thoughts with more unrelenting malevolence and undeniably skilled enterprise, the last of the three a particularly carnal ravishment which sears the flesh with its acidic grooves  and callous riffing not to mention barbaric rhythms.

It has to be said the second half of the album is its best started by Intro To The Revelation, the gate way into the most creative heart of the release. The shimmering instrumental makes way for the highest point of the album, Revelation Of The Great Red Dragon. It is a colossal compassionless scourge with viral grooves, captivating sonic imagination, and pillaging violence, and the one song which does linger and prompt memories after its despoiling of the senses, though it is equally matched by The Dice Are Cast, another herculean ravage upon the person and psyche. Both tracks show how good the band are and could be with a richer uniqueness to their presence which conversely does leave the rest of the album looking less impressive in some ways.

The album makes sure every song is at least within its companionship something which leaves scars of spite and pleasure, the final tracks The Greatest King Among Demon and An Obelisk Of The World no weak exceptions. Both drive to infiltrate further within the listener if not with invention than with sonic violence as presented by some great guitar solos and piercing fire branded notes. The Great Red Dragon is without doubt a brief, at less than thirty minutes in length, but great album, and if you are looking for a release extremely well done but prowling familiar extreme metal territories then this is one not to be missed.