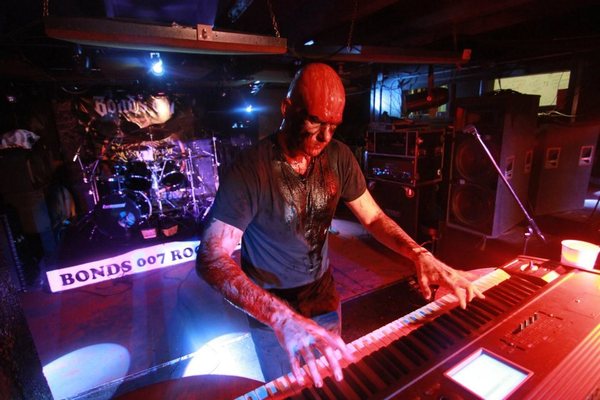 Having been impressed initially and even more so since our review of All For Naught the debut album from Goatcraft, it is fair to say there was certain anticipation for its successor The Blasphemer. The new release emerges as again a potent fire of craft and expression which even more so than its predecessor improves and permeates imagination and passions over time as the artist takes the passions through an extraordinary provocative landscape. The fourteen track scenery of self-termed necroclassical sound is an enthralling and absorbing spark for thoughts and emotions, a slab of beauty which is leaps ahead of the rather good first Goatcraft release and an unveiling of maturity and a fully rounded narrative which is quite breath-taking.

Goatcraft is the one man project of San Antonio based Lonegoat, a composer/musician who created the project in 2010 to answer and use the frustration the artist had with occult and death metal, its commercialism and loss of soul for want of a better word. Piano and keyboard driven, his unique sound and presence was soon sparking intrigue and attention live and most potently with the release of All For Naught. Released via Forbidden Records, the album was an elegant and intensive tempest of passion and creativity within an intrusive and captivating ambience which aligned shadows to emotional investigations. The Blasphemer is bred from the same bed of seeds but with a much more evolved, grown, and complete incitement. Whereas the earlier release was a collection of individual tracks which did lie well together, Lonegoat’s sophomore album plays like one immersive journey with each piece a chapter in the wide narrative of the release. Equally the tracks work as smaller investigations alone too, each experimenting within the cinematic atmospheres emerging from the pieces of music.

As mentioned there is also a richer beauty to the I, Voidhanger Records released The Blasphemer, something All For 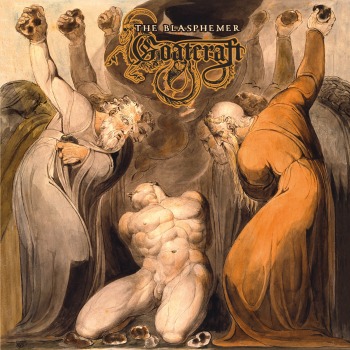 Naught was not lacking but like everything, upon the new album it has risen with new resourcefulness to seduce and pull the imagination into dark corners and blackened reflections. A concept album, The Blasphemer is themed around the works of English painter and poet William Blake, each piece taking inspiration and hues from his compositions aligned to theological observations. A quote from Lonegoat describes the release as being “Written and recorded from July to November 2013 under the influence of William Blake’s paintings and, The Blasphemer represents my quest to reconcile the mystical side of GOATCRAFT with its nihilistic side.“

From the invasive and brooding orchestral breath of Intro: Behemoth, the album explores and invites the imagination with every ounce of its creative and intensive expression. Temptation And Fall is the first full encounter on the album, a track which instantly envelops the psyche in its gentle shadows whilst punctuating that slow consumption with a poignant and dramatic piano evocation, its notes and melodic punches almost stalking the senses as it presses thoughts and visions into action. The following House Of Death is borne from a similar dark empathy, an instant indication that you can take songs singularly or as an extended tale to equal but different effect. Though as mentioned William Blake has inspired the release, it is hard not to involve imagery in the mind which is Poe-esque and noir kissed, all embracing melancholic and sinister gothic shadows.

The excellent intimidating title track, with a slight discord glaze to its evocation, ripples and rifles the imagination next before both Hecate and Nebuchadnezzar challenge and seduce. The first has a cloak of darkness which is almost smoggy from where a Victorian landscape escapes and adds its own disturbed beauty whilst its successor flirts with high drama and stage bred emotiveness whilst again guiding the listener on a classically sculpted venture of shadowed elegance and erosive passion.

Each track presents its own unique canvas but like a triptych squared, all slot into an emotive painting of sound and subsequent visualisation by its recipients mind as potently shown by the engrossing In The Arms Of Pity. The four parts of The Great Red Dragon though is a real version of that three pictured union, a symphony dedicated to Blake’s series of watercolours with the same title. It is a masterpiece all on its own, a haunting enlightenment which traps and embraces the imagination as potently and innovatively as their inspirations, and if you can study the paintings whilst listening to the movements all the better as they definitely inspire further side by side.

The album closes around the senses and in presence with firstly the almost meditatively suffocating Eternal Prayer Of Urizen followed by the dark tonal exploration and emotions of Satan In His Original Glory, a piece like the rest which breathes torment and despair whilst bewitching ears and emotions. Finally Lonegoat brings the unique experience to closure with the brief Outro: Leviathan, a caress of music which plays like an epilogue to the shadows and dark dramas before.

The Blasphemer is an exceptional encounter which cannot be assessed or examined in a mere handful of listens. Like a painting, the album offers something new and provocative with every flight through its dark atmospheres and almost erosive deep emotional textures. Majestic and threatening, it is an album of the year contender.

Uncompromising and ravenously destructive, The Great Red Dragon from Polish death metallers Hellspawn takes no prisoners sonically or in intent. It is an album which ravages the senses with impressively accomplished craft and merciless corrosive energy to leave one exhausted and reeling under its weight of sound. It is also admittedly a release which seemingly refuses to take adventurous avenues within the genre or break down existing ideas into something truly distinct, yet from start to finish it leaves one wholly satisfied and unreserved in wanting to stand before its confrontation time and time again.

Hailing from Wieluń, Hellspawn formed in 2003 and by 2005 with a settled line-up had their first record, Demo 2005 released via Chilean label Infernal Overkil and Nihilistic Holocaust in France, the second as part of a split release. 2010 saw debut album Child of Hell released through Exploratory Drilling Productions to strong responses, reactions which have been surpassed by The Great Red Dragon upon its unleashing via Wydawnictwo Muzyczne Psycho last year. An album apparently heavily influenced by the work of William Blake, it is a release which though having been released last year deserves to be in the awareness of all extreme metal fans. As mentioned it does not offer anything new but the release is undoubtedly a thunderous engagement with sounds derived from the likes of Morbid Angel, Hate Eternal, Behemoth, and Marduk and one which leaves no one bored.

caustic guitar scraping of the ear. It soon collects all its elements for an explosive torrent of crippling rhythms from drummer Robert Kolman and tight cutting riffs from guitarists Marcin Garyga and Daniel Drosiński, whilst bassist and vocalist Mariusz Konieczny unveils the deepest shadows with his intimidating lines and heavy vocal squalls. The track evolves into a maelstrom of sonic guitar mastery and hungry intensity rhythmically and vocally, the heavy growls of Konieczny malice drenched.

The following Word Becomes Flesh continues the formidable start with its own primal violation and sonic torrent of aggression. Like the first, the song ripples with ideas which though not exactly new keep the song fresh and intriguing whilst in its overwhelming company. It has to be said even at this point that once a song departs it is not that easy to remember anything in particular about them when looking back, and that also applies to the album as a whole, but within their tumultuous battle they do not let anyone or any appetite down.

The likes of Hellspawn, Diabolic, and the title track blast the senses and thoughts with more unrelenting malevolence and undeniably skilled enterprise, the last of the three a particularly carnal ravishment which sears the flesh with its acidic grooves  and callous riffing not to mention barbaric rhythms.

It has to be said the second half of the album is its best started by Intro To The Revelation, the gate way into the most creative heart of the release. The shimmering instrumental makes way for the highest point of the album, Revelation Of The Great Red Dragon. It is a colossal compassionless scourge with viral grooves, captivating sonic imagination, and pillaging violence, and the one song which does linger and prompt memories after its despoiling of the senses, though it is equally matched by The Dice Are Cast, another herculean ravage upon the person and psyche. Both tracks show how good the band are and could be with a richer uniqueness to their presence which conversely does leave the rest of the album looking less impressive in some ways.

The album makes sure every song is at least within its companionship something which leaves scars of spite and pleasure, the final tracks The Greatest King Among Demon and An Obelisk Of The World no weak exceptions. Both drive to infiltrate further within the listener if not with invention than with sonic violence as presented by some great guitar solos and piercing fire branded notes. The Great Red Dragon is without doubt a brief, at less than thirty minutes in length, but great album, and if you are looking for a release extremely well done but prowling familiar extreme metal territories then this is one not to be missed.