Sybreed – God Is An Automaton 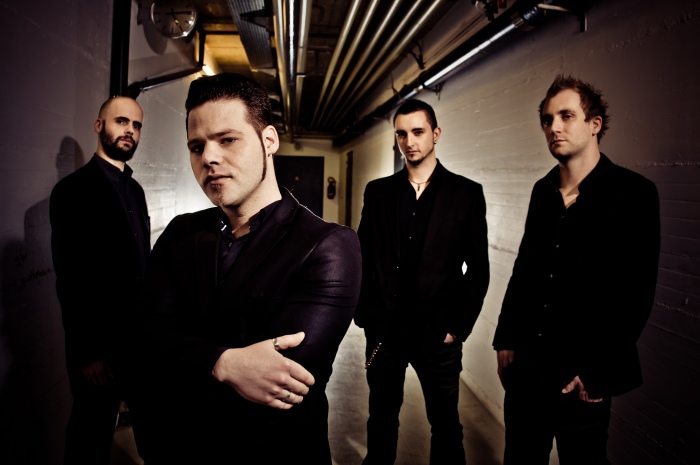 Having more than a soft spot for Swiss metallers Sybreed there was more than a slight hunger to the anticipation going into their new album God Is An Automaton. Always a band to ignite the imagination with their unwavering yet diverse ‘death wave’ metal sound, they have across their previous trio of albums, left plenty of inspired satisfaction behind. Fourth album God Is An Automaton sees the band drawing on all their former glories and essential essences to create something wholly impressive and sparsely imaginative. It is the band at their most potent invention and sound to date and a leading triumph of the year.

Since forming in 2003, the band has struck up mighty allegiances with hearts through their live shows and releases starting with their 2004 debut Slave Design, the album lighting up the underground scene and media alike. Second album Antares three years later only raised their potential and stature with its darker tones and intent whilst The Pulse of Awakening in 2009 elevated the band to the top plateaus of deserved recognition and acclaim. God Is An Automaton is the next step in their evolution, immense and provoking it is a masterful and magnificent construction of passion, sound, and intensity. Linking their cyber metal sound with even heavier shadows and destructive tones, the release finds the band, to give some impression of the creativity at play, like the unique genius offspring from a union of Fear Factory, Static X, and Periphery. Expectations were very high for the album and with immense ease those thoughts were fed and exceeded.

Released through Listenable Records, the album immediately has full attention as disruptive slabs of riffs and beats

shake up the initial bristling ambience of opener Posthuman Manifesto. Stirring its muscles into life the track soon settles into a prowling beast, hunger in its eyes as the riffs and keys from Thomas “Drop” Betrisey seize the senses with their twisted vice like grip. The song is in attack mode throughout whether from its forceful driven heart or the resourceful intrusive caresses and whispers offered elsewhere, its melodic electronic manipulations dancing over the numbed senses brought by the bruising precision rhythms of Kevin Choiral. The vocals of Benjamin Nominet as expected are glorious, clean or in his bestial growling, and it is probably fair to say this album is his finest hour to date. He leads the passion of the release and songs wonderfully whilst finding an organic companionship to the impactful sounds.

The outstanding start is only reinforced by the following towers of excellence in No Wisdom Brings Solace and The Line Of Least Resistance, the first a diverse rampage which resonates through bone and the second the conjuror of twisted grooves and sizzling crystalline melodics. It is a song which fuses corrosive elements with startling sunspots of melodies and harmonies while all the time bassist Ales Campanelli is lurking and delivering bass lines which crawl into the psyche. The production across the album is arguably not the kindest to him, his great work slightly mugged by the intensity brewed but it is always impressively there bringing depth and shadows.

Red Nova Ignition, Downfall Inc., and Challenger alongside Into The Blackest Light, are further major highlights from an album colossal in creativity and consistency. The first trawls and churns up emotions and senses with rapier beats and sawing thrusts of riffs to leave one breathless, staggering under its intense assault and intrusive malevolence. Downfall Inc. is similar though it attaches its claws through a more even and measured attack. Its early presence slowly swamps with mesmeric atmospheres and melodies stalked by sturdy and intimidating energy from guitar and rhythm section. It evolves into a deep drilling exploration of the synapses whilst soothing the wounds with warm and expressive keys and vocals.

The other two songs just spark further furnaces of pleasure. Challenger is a burning unrelenting gnawing of the senses, which even the slight Marilyn Mansion infection only elevates further. The track has every part of the body and psyche itching and riled up with The Blackest Light coming in a little after, sending everything into overload. The song has everything, explosive light and malicious dark, malice coated venom and lingering hope, and finely crafted violence and blood surging inflammatory passion. It is impossible to choose a favourite track from God Is An Automaton, but this song is always to the fore of thoughts.

Sybreed has as quietly assumed unleashed one of the best albums this year, but surpassed everything imagined. God Is An Automaton is a classic, enough said!