The Kut – Valley of Thorns 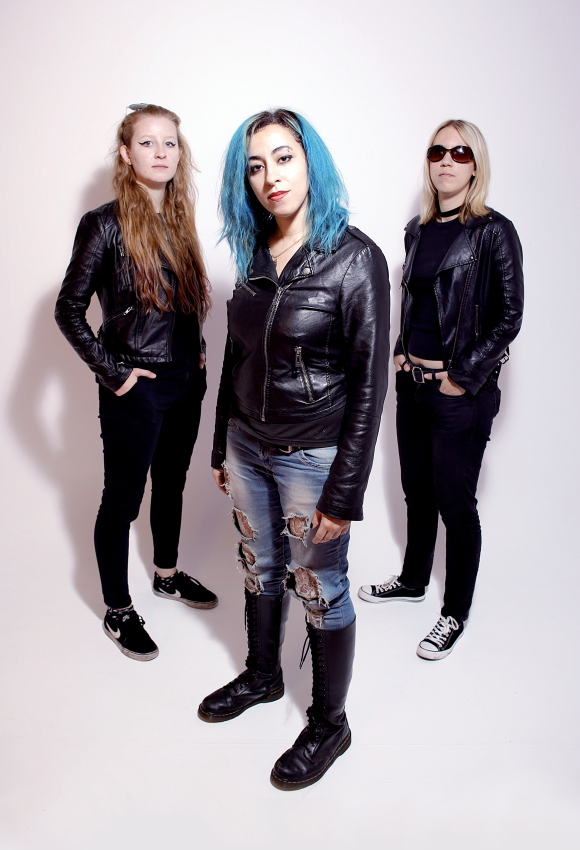 The Kut by Canz Rickman

There is no doubt that the recent release of new single Mind Games stirred up a fresh hunger in an already in place appetite for the eagerly anticipated debut album from The Kut, in us and a great many others. Truth is we had already been hooked on the band’s contagious punk grumble ’n’ roll through their previous EPs but the new track’s fresh adventure and imagination brought fresh intrigue and pleasure to devour. It ensured that Valley of Thorns was leapt upon with rude eagerness and the fuse to further pleasure lit.

The album brings live favourites, some of which already known from those previous encounters, and brand new creative provocations; a union providing one rousing and increasingly impressive, dare we say essential slab of rock ‘n’ roll. Within its striking body it roars and seduces, attacks and coaxes, all the time infesting and manipulating ears, body, and imagination in a way which reminds of punk rock in its seventies prime but is all modern fire and attitude.

The Kut is the alter-ego of multi-instrumentalist Princess Maha and live a sonically ferocious trio completed by the moodily infectious basslines of Stella Vie and the swinging beats of Diana Bartmann. With their reputation growing by the year since emerging in 2010, The Kut has exploded upon venues across the UK and Europe and earned rich praise playing festivals such as Download, Camden Rocks, Nice N Sleazy, Rebellion, Hard Rock Hell, Glastonbudget, and Strummercamp. Support and acclaim has been rife across the media, radio and written press alike, and last year saw the band become a finalist in the Rock category of the UK Songwriting Contest 2017 as well as being a current Semi-Finalist of the International Songwriting Competition. It has been a busy and successful time which the release of Valley of Thorns can not only escalate but nurture The Kut as a household name. Produced by James LeRock Loughrey (Skindred, White Zombie, My Vitriol, Bjork, Def Leppard), Valley of Thorns kicks off with its lead single, Mind Games teasing the senses with its sonic mist before boldly strolling through ears with a Deftones meets Spinnerette like captivation. There is a haunting air and emotive depth to the song yet it has a virulent swing to its gait and rhythmic persuasion which has the body swaying and appetite greedy in no time. A track epitomising the seductive persuasion and nagging irritability in The Kut’s sound, it is pure mesmerism which has become stronger and more striking across multiple plays.

The album’s stirring start continues with the rebellious rock ‘n’ roll of Hollywood Rock N Roll, a virulent slice of anthemic temptation which had us bouncing and roaring in no time with its Babes In Toyland/ Spinnerette-esque stomp. The latter of the two is a band which often frequents thoughts across the album, its snarls and instinctive catchiness reminding of the band even in a sound which is pretty much distinct to The Kut.

The following No Trace swings in like a predatory temptress, grooves writhing around ears with an almost salacious touch as dark hues of bass growl and beats firmly strike. It is a scuzzy affair, the songs body a muggy grunge trespass contrasted by Princess Maha’s harmonic vocal caresses which offer their one lining of danger. It too has a haunted sigh to its croon which just enslaved attention before I Want You Maniac grips ears with initially a gorgeous low slung hook and subsequently its infection loaded swing. A tinge of L7 lines its tenacious enterprise, a whiff of Hole its encroaching shadows; the song a volatile sonically visceral encroachment just impossible to have too much of.

The blossoming diversity within The Kut’s sound is superbly shown in next up Love In The Rush Hour, the song a collusion of harmonic kisses and predacious intent. It strolls with the inherent swing which effortlessly springs from the band’s invention but aligned to a caustic glaze of guitar amid fuzz twisted riffs; an entangling of contrasts which is as compelling as Princess Maha’s vocal temptation who at times can be described as being like the UK Brody Dalle.

I Am Vain is dirty rock ‘n’ roll with attitude flowing from every pore but as naturally infectious as anything within the album; its punchy nature spawning its own unique hooks and skilled enterprise while the mellower climate of Alekhine’s Gun breeds a prowling volatility which erupts in sonic flames and vocal abrasions; its irritations and discontent erupting and spewing rancor before simmering down back into the song’s relative calm. Though neither track quite match the heights of those before them each leaves ears and appetite greedy for more whilst revealing new shades in The Kut’s adventure.

A calmer air is brought by X-Ray Eyes too though unsurprisingly it has an inbred growl which fuels bold rhythms and its suggestive character plus an increasingly addictive catchiness which has song and the body bouncing as the first contemplates and the second submits to its moody enslavement. Its success though is soon eclipsed by that of Bad Man. A multi-flavoured rock ‘n’ roll virulence, the track is like a boiling cauldron spiced by the punk juices of Bikini Kill, the dark rock ‘n’ roll of  Jess and the Ancients Ones, and the infectious agility of Sleater-Kinney; it all brewing up into another individual Kut intoxication.

The album is completed by Mario, a raw pop ‘n’ rock encounter as beguiling as it is aggressive. Throughout the album another band which at times comes to mind is seventies outfit The Photos through the pop hues open within The Kut’s sound. Here alone there are coincidental echoes in its infectious traits which only add to the fun.

Being already hooked by their earlier releases, we were always likely to head into Valley of Thorns with a favourable disposition but swiftly it outshone anticipation heights, the new songs alone suggesting The Kut is ready to grab attention from the biggest names in attitude soaked rock ‘n roll.

Valley of Thorns is released via Cargo Records / Criminal Records on 13th April in the UK and Europe and May 18th in the US.