It is fair to say that Falling Down, the debut EP from French rockers Quick & Dirty, did not make a striking first impression though certainly it offered strong enjoyment, especially with its opening invitation to rock ‘n’ roll. It is equally valid to say that given the time and effort all releases deserve, the five track proposition has only blossomed into something far more fascinating which maybe more than most is tempting regular attention.

Quick & Dirty was formed in 2014 by vocalist/guitarist Ludovic Caussin and guitarist Fabrice David. First recruiting drummer Laurent Cirri, the Paris based band found a bassist to complete its line-up and begin work on writing and honing a sound said to take inspiration from the likes of Foo Fighters, Led Zeppelin, and Iggy Pop. The departure of their first bassist led to the addition of Tanguy Poirier and in 2016 their initial and successful steps into the Paris live scene.

Quick & Dirty recorded their first release early this year, the successfully crowd funded Falling Down EP having its unveiling recently to already eager and praise lauding responses. It starts up with its title track, a contagious rock ‘n’ roll stomp of a proposition opening with a swiftly engaging tendril of blues scented guitar. Quickly it strolls with boisterous intent through ears, the individual vocals of Caussin as lively as the hook littered sounds around him, all colluding in an increasingly infectious revelry coming to a virulent head in its rousing chorus. The track is irresistible, an instinctive arousal of body and spirit which gets the EP off to a mighty start never quite matched again. 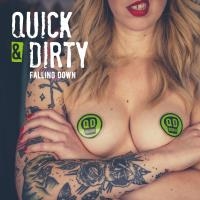 Nevertheless, songs like the following I Was Born only add to the adventure and potency of the release, its own blues steeped character and saunter providing a host of fiery grooves and ear pleasing hooks as the band shows more classic rock traits. Soon developing its own personality to quickly give greater variety to the band’s sound and EP, the song saunters along with a creative prowess and imagination easy to get engaged in, epitomising the release as a whole in becoming a stronger and more compelling encounter over a subsequent handful of listens.

East West comes next, its opening melodic jangle making a subdued but inviting coaxing upon which the spoken and blossoming vocal tones of Caussin weave their suggestion. As is the band’s template, everything in the track leads to a spirited and seriously catchy, hard to ignore chorus before the excellent Trust Me entices with its even richer blues toned shuffle. Rhythms dance as fuzzy flames of guitar smoulder, a flirtatious mix matched by mischievous vocals and teasing melodies which entangle and come together in the track’s own brief but devilishly infectious chorus; that Iggy punkiness hinting away within its heated roar.

The rawer rock ‘n’ roll of Would You Like To Dance brings the release to a strong close, its body a mix of rock at times as much glam and grunge as it is hard and punk rock in other moments. Maybe missing the spark of its predecessors but only increasing in appeal and persuasion through each outing with its enterprising fun, it pretty much sums up the EP in success and adventure.

Falling Down is a great introduction to Quick & Dirty leaving ears and enjoyment thickly satisfied and full whilst laying down a strong base for the band to grow and expand a more unique sound from. For hearty rock ‘n’ roll with a smile in its nature, you could definitely do a lot worse.

Falling Down is available now @ https://quickanddirty.bandcamp.com/album/falling-down