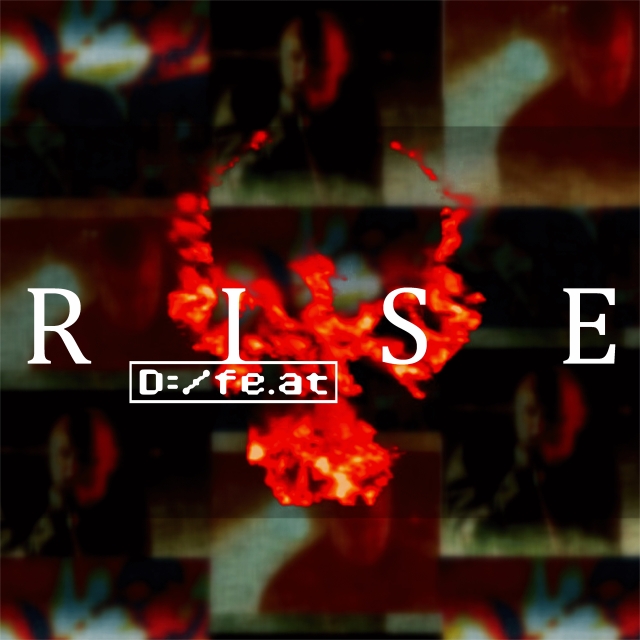 A handful of weeks short of two years since the eagerly welcomed release of their EP, You Know What You Are, British electro industrial/synth pop duo Defeat return with new album, Rise. This too, such the highly enjoyable offerings from the band before, has been a keenly anticipated encounter since news of its coming; enthusiasm rewarded with the pair’s most accessible yet creatively imaginative and skilfully accomplished proposal yet.

The successor to debut album [Seek Help] of 2013, Rise is a collection of anthems to dark thoughts, corrupted emotions, and invasive shadows. They are tracks which unleash the most virulent hooks and infectious escapades laced with menace and creative threat like a twisted twenty first century Fad Gadget; indeed there are times where you just feel that if Defeat were emerging in the eighties, Mute Records would have had them snapped up.

With inspirations from the likes of Nitzer Ebb, Depeche Mode, NIN, Front 242, Front Line Assembly, and Skinny Puppy teasing their own ever potent and individual sound, the twosome of vocalist/lyricist Anthony Matthews and keyboardist/programmer Gary Walker have taken the evolution and promise of You Know What You Are and pulled it into another realm of craft and maturity, challenging their songwriting and imaginations along the way.

Rise opens up with The Phoenix; its sound elevating from the breath and ashes of an emotional wasteland. Melancholy honed melodies soon surround a rhythmic throb; the menacing and almost frustrated air becoming a hypnotic stroll jut as swiftly with a swagger and character as much a threat as a defiant realisation and action to its initial corrosive state. With catchy electronic flirtation and salaciously dancing shadows, the song is an easy to succumb to trap, Matthews’s words and tone a compelling mix of challenge and resurging hope.

The following Rage starts as an irritated emotional and physical ember which flickers and flames into an EBM nurtured blaze and again washed with defiance. It never becomes a furnace but instead wonderfully nags at the senses and imagination, stroking and provoking both with its relentless catchiness before The Hurt grows in ears. Its opening lure is almost predatory, laying dark electro seeds which swiftly bloom into another niggling refusing to be ignored temptation. Matthews echoes its shadows with his inimitable vocal prowess and presence; the drama within all aspects blossoming and immersing song and thoughts in contagious theatre.

Dirty/Sick crawls and trespasses the listener next, Matthews’s introspective guise a festering depravity surrounded by the deceitfully tempting sounds and invention of Walker, his melodies licking at ears with a relish almost matching the lustful threat of each trespassing syllable. The track is a grievous seduction and just irresistible while its successor and the album’s title track shares a toxic serenade invading and suffocating the senses with its envenomed mist; an ambush which should not be welcomed and embraced such its sinister intent but surely is.

Following track, The Fatalists sees Walker take lead vocals for the only time within the album. With pulsating electronics and shimmering harmonies, the song shuffles and glides through ears, vocals shaping its honest heart and melodies colouring its electro pop scented landscape. As with all tracks, shadows and light embrace and collude; often challenging each other or as here uniting in solemn and rousing beauty.

Even more galvanic and masterful is Nothing You, a lead single if ever we heard one. As its creative kindling smoulders, there is an air of excited intrigue and magnetic compulsion awoken; anticipation swiftly fed with a kinetic canter of creative virulence. With voracious hooks and grooves woven into one deliciously persuasion, the outstanding song is one virulence driven adventure unafraid to change gait and energy on a twist of a note as it pounds, pulses, and provokes the passions with irrepressible majesty.

The album closes with the melodic croon of Live Your Life, a gentle and darkly tender but still shadow wrapped incitement and reminder to find the strength and believe in being yourself. It is a fine smouldering and seductive end to Defeat’s most impressive and enjoyable encounter yet. All of the potential of their previous releases has been realised within Rise creating something deserving of the richest attention. 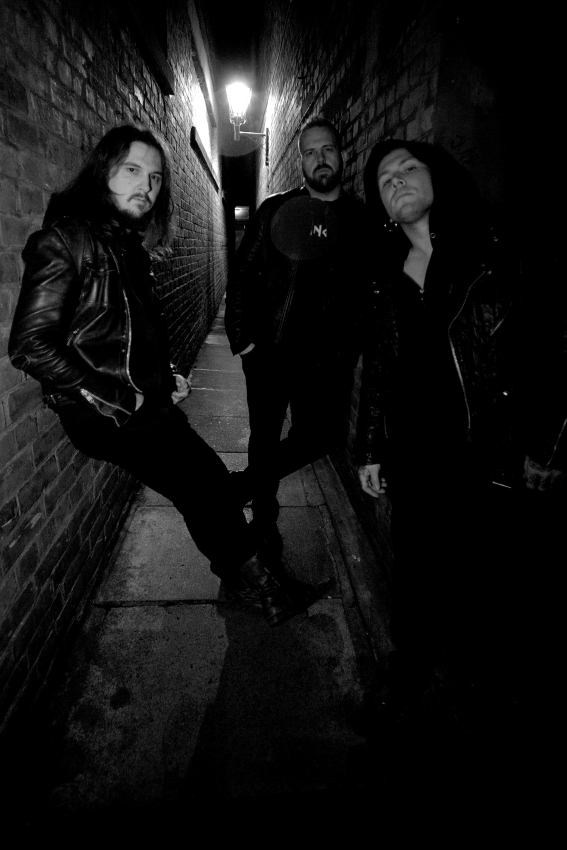 Like all music fans we breed real anticipation for certain and numerous releases each year but few as eagerly as that for the first album from British rockers Hellbound Hearts. Because of a pair of rousing and acclaimed EPs, the Yorkshire hailing trio has stirred a real appetite for their fervour driven rock ‘n’ roll. Now we can say that those early successes were just appetisers because without doubt Film Noir is the main meal from the band.

One of the things which could have been said about both the EP’s, Outside and The Proximity Effect and also their self-titled debut before that, was that the Hellbound Hearts sound was whilst individual not always truly unique in the crowded landscape of alternative rock, though certainly evolving with every release towards that aim. It is something the trio of vocalist/guitarist Danny Lambert, bassist Craig McLaren, and drummer Lee Brook took note of as explained by Lambert when talking about their first album and how it turned out not as originally intended. “It wasn’t working“, he recently admitted, “we’d had some changes and time to reflect, and whilst the songs were good, we strongly wanted to be our own band and not be like a 1000 others flooding the market. So we canned the album, went back to the drawing board and re-grouped, re-composed and wrote a bunch of new songs, much more fitting with our sound.”  The result of that bold move and concentrated effort is an album which comes alive from its first breath, never relaxes its energies and arousal of ears until the final note, and unmistakably provides a singular body and character of adventure.

Produced by Matt Ellis (Black Spiders, Terrorvision), Film Noir gets right down to business with its opener and recent single Suffering The Radio. Dark brooding keys hug ears initially, the melancholic air of a piano just as swift in its suggestion before from within their shadowed caress a strike of guitars sparks a rumble of riffs and rhythms. Stirring and arousing, the deluge of temptation shows restraint as it welcomes the potent tones of Lambert backed by McLaren and Brook, a union aligning with swinging hooks and a great grumbling bass groove. Inescapably infectious and boisterous, the track hooks ears and listener involvement, inhibitions dismissed for a peach of a persuasive chorus as the heart of real rock ‘n’ roll descending on the mundane and mediocrity of the modern music world above the underground. 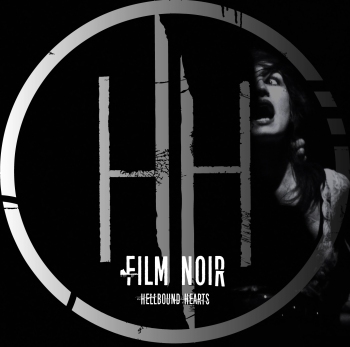 The superb start is matched by the virulent exploits of Broken Hearted where again aggressive textures and warm melodies entangle in a contagious roar. Riffs and rhythms prowl with rapacious relish whilst hooks and vocals come littered with infectious enterprise. There is a touch of Jimmy Eat World meets The Wildhearts to the song but already the album is deep in unveiling a Hellbound Hearts only owned proposal, revealing more with every passing minute and songs like next up Poor Disguises. Taking its time to rise up, almost stalking the listener with its predacious beats and subsequent bass groan, the song stands tall with hungry riffs which in turn spark a punk fuelled charge of attitude and energy which continues to infest the song’s tenacious and grouchy rock ‘n’ roll. Lambert’s warm tones bring a fine temper as too melodies though they have a touch scorching senses like licking flames; everything adding to a stomping slice of punk ‘n’ roll.

New single The Light We Cannot See follows with its own galvanic nature and air, again rhythms and riffs carrying a heavy and heady thump as grooves entangle their menace with flirtatious and catchy endeavour. Calmer twists and suggestive textures add to the track’s lively drama and wistful emotion before the reflective Still We Wait ebbs and flows with initial emotive grace. It is a coaxing though into a far darker and tempestuous realm, surges of almost Rob Zombie like riffs and intensity bursting free whilst surf rock kissed melodies shine radiantly upon the turbulence, both contrasts merging for passages of pure ravenous rock ‘n’ roll. With the growling breath of McLaren’s bass and Brook’s dynamic rhythms, the anthemically fuelled track is quite glorious.

There is a great whiff of Therapy? to next up Blood, at times of Pitchshifter too, yet the song entangles ears and pleasure in wiry creative tendrils openly peculiar to Hellbound Hearts while Wake Up flirts with a mixture of pop punk and hard rock for its easy going and firmly captivating enticement before We Are All Alone shares its own moment of reflective honesty against an increasing gnarly bassline, rapier like beats, and metal urged sonic dexterity. The track does not quite light personal tastes as powerfully as many of those around it even with its Terrorvision spiced hues but easily leaves satisfaction greedily content.

The album is closed off by firstly the insatiable heavy rock growl of Fortunes and finally the hellacious incitement of Silent Horror Movie, both tracks in their individual ways webs of stylish temptation and instinctive infection with the former a more pop rock soaked contagion and the latter a ferociously hungry roar uncaging the primal rock ‘n’ roll.

Hellbound Hearts have been no strangers to praise and success but Film Noir leaves all before it dead in the water. It is an exhilarating slab of rock ‘n’ roll which truly only gets better and more irresistible with every listen.

Film Noir is released April 7th through https://www.hellboundhearts.com/   and digitally across most online stores.