It has taken a couple of years for Rum Thief to follow up the acclaimed Reach For The Weather Man EP but the wait has been worthwhile as he releases his finest moment yet with Time to Make a Move. The new EP is a richer and broader adventure of sound and word without losing the instinctive energy and raw passion of its predecessors and a wake-up call to major attention.

Rum thief is the solo project of Manchester based musician/songwriter Jot Green, who previously played drums for over a decade in various bands before deciding to explore his own songwriting and imagination. Debut EP Clouded Mind quickly drew ears and praise in 2014 though it was Reach For The Weather Man a year later which truly sparked acclaim and interest the way of the project. The years around and since have established Rum Thief as a just as flavoursome live presence with guitarist Kieran Whitehouse, bassist Gary Long, and drummer Chris Hobbs alongside but it is through Time to Make a Move that you get a feeling everything is going to ignite for and around the band. 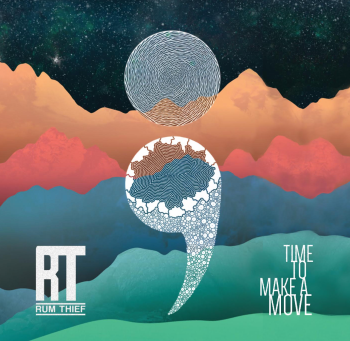 Recorded with producer Shuta Shinoda at the legendary Hackney Road Studio, Time To Make A Move opens up with the outstanding Spittin’ Daggers. A single melodic jangle beckons ears initially, its potent coaxing soon joined by the throb of bass and swing of beats, all settling into a tempting stroll as Green’s expressive tones and descriptive lyrics join the appealing mix. It is a lively simmer soon boiling over in a fiery chorus as aggressive as it is infectious. Like a mix of Arctic Monkeys and Fatima Mansions, the song prowls and roars; its feisty rock ‘n’ roll a web of instinctive catchiness, melodic fire, and dramatic heart spawned suggestion.

The thrilling start is followed by the milder flirtation of the EP’s title track; a mellower proposal soon revealing its own strength in tenacious seduction and captivating enterprise. Its heart is also a lively fusion of instinct and imagination, a new wave/indie rock weave becoming more boisterous and volatile with every passing second. There is something familiar about its character but an indefinable quality which just adds to two and a half minutes of pure pleasure.

What Do You Know is next, its raw air and melodic teasing a fusion of pop from the past few decades, being almost Joe Jackson like in its organic contagion of rousing pop ‘n’ roll. With as many hooks in voice as in sound and again razor sharp lyrically without a sniff of indulgence, the song simply captivates before being matched in potency by closing song Toilet Door. With a rockabilly scent to its voice and shuffle, the track at times reminding of The Shaking Pyramids, the song croons and seduces like a smouldering fire; transfixing from the start and bursting into bigger flames over time as its union of sixties/modern pop catches alight.

It is a strong end to a quickly and increasingly beguiling encounter. At the time, it was hard to imagine Reach For The Weather Man being majorly outshone by future offerings from Rum Thief but Time to Make a Move leaves it well in its wake which is why expectations are rising of seeing Rum Thief become something close to a household name.

Time to Make a Move is out now.