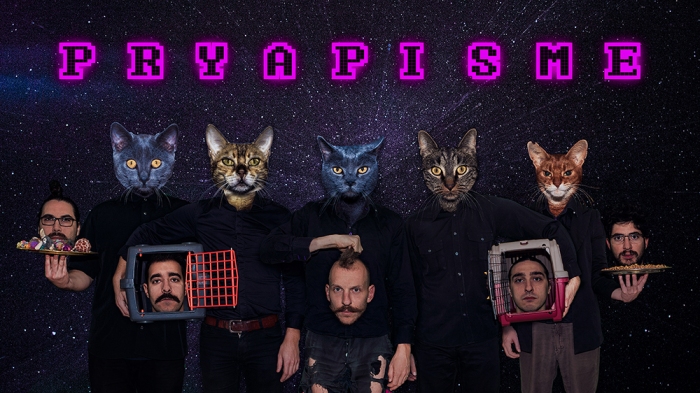 The press release for Diabolicus Felinae Pandemonium, the third album from the creative diablerie that is avant-garde/experimental metallers Pryapisme, declares it is “definitely the album of immaturity”. In truth it is the most accomplished, dare one say inventively mature offering from the Clermont-Ferrand hailing outfit yet. That growth has not defused the rousing bedlamic imagination of the band, in fact it seems to have escalated its mischief but where previous releases might be called schizophrenic such the mayhem of their head spinning diversity, Diabolicus Felinae Pandemonium feels in control of its creative chicanery; the result importantly again, a hell of a lot of fun and another irresistible infestation of psyche and spirit by the French outfit.

Their latest release is the first recorded with the band’s actual live formation rather than the core trio, the full quintet of Benjamin Bardiaux (keyboards), Nils Cheville (guitar), Antony Miranda (bass, guitar, moog, vocals), Nicolas Sénac (guitar), and Aymeric Thomas (drums, clarinet, keyboards) revealing their off-kilter craft and imagination. The album itself reveals the “advent of the Era of the Cat, the one which will replace mankind. After the arrival of the lol-cats all over internet, which constitutes the last conspiracy, well after the one of Ancient Egypt where the cats were already ruling the highest spheres of power, the diabolical felines are now preparing the birth of Satan’s cat, the Chosen One which will tame humanity and in the end, conquer the whole galaxy with the help of its pentagram of cat food.” Further music to our ears as we always claimed they were the devil’s spawn.

It opens up with Un max de croco, coaxing Middle Eastern vines escaping the guitar as rhythms shuffle around, ready to dance in the subsequent blossoming of melodic frivolity. There is a restraint to it all though, a reserve which accentuates the glint in the eye of hooks and keyboard spun melodies. In saying that, the infectiousness of the track is rampant and only strengthened by the jazzy twist and throaty throb of the contrabass provided by guest Matthieu Halberstadt (Ogino, Please lose battle). Never predictable but as expected and welcomed, the band and song turn on a spin of notes through varied styles and flavours, each move enslaving body and imagination in active participation.

La Boetie stochastic process follows, flowing with summery warmth and flirtatious catchiness through darker shadows and dirtier street corners, every crevice a well of human drama and devilish enterprise. As with every song, thoughts have a field day interpreting and playing with the suggestiveness offered and the melodic painting shared, hips swinging with zeal to funk infused turns as the sax of Adrien Daguzon (Zibeline) flames in the midst of it all. There is a touch of 6:33 to the track, a whiff of Trepalium in its rowdier twists but as ever expectantly unique to Pryapisme.

The tenacious stroll of 100 % babines, pur molossoïde! roams ears and imagination next, its wave of hookery and sonic theatre if not cinematic resembling themes of those old sixties detective/sci-fi shows around floral melodies and darker, almost sinister beauty. Its individual escapade and canvas of sound just confirms another release driven by unbridled diversity, A la Zheuleuleu backing its affirmation with its celestial, moon lit saunter into a hectic and aggressively boisterous romp while Tau Ceti Central immerses the listener in another jazz scented, smoky adventure.

The album is like a travelogue, glimpses at landscapes and intimate insights discovered and invaded by its theme’s protagonists though Tête de museau dans le boudoir (Intermezzo) is more of a captivating and increasingly weird caress allowing for mental refreshment though to be fair it engages with the imagination as much as any other proposal within the album such its loco array of styles.

Myxomatosis against architektür vol IV is equally a rich tapestry of styles, its psychotic nature a trespass of extreme and melodic metal bound in the virulent revelry of varied flavours and pure manna for body and soul before Carambolage fillette contre individu dragon non-décortiqué casts its Nintendo spun contagion, a lure becoming more tempestuous with time as guitars and rhythms add their cartoonish devilment.

The album is completed by firstly C++ and its mesh of cosmopolitan spicing and endeavour, not forgetting mewing cats, and lastly Totipotence d’un erg, an epic thirteen minutes of dawning power, imposing contagion, and majestic wickedness. Flying by such the consuming potency of its evolving drama and kaleidoscopic soundscape, the track alongside its predecessor provides a compelling end to another thrilling outing with the instinctive insanity of Pryapisme.

Diabolicus Felinae Pandemonium is arguably the band’s most fluid and persistently contagious release yet, certainly it is their most skilfully woven and a treat for the bold and the insane.

Like Loading...
‹ Czar – Life Is No Way To Treat An Animal
SJ and the Flying Pigs – Fireball ›