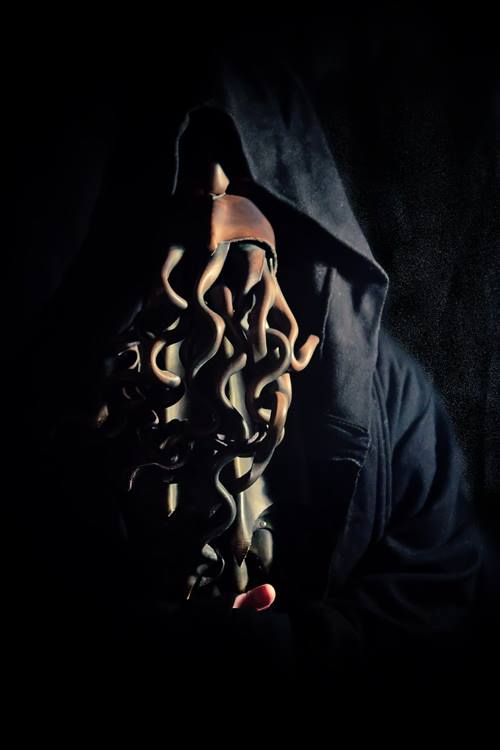 Great Instrumental music is the playground for the imagination and emotions, a suggestive toy for the senses and thoughts to sculpt their own adventures to, and that is exactly the success that Prohibition from Belgian band Squidhead achieves. Its five tracks cast a captivating web of technical vivacity and sonic expression which has the listener physically and mentally involved with little fuss and accomplished ease, and though you can openly pick out the influences to artist and music it only adds to the intrigue of the encounter.

Squidhead is the solo project of Pierre “Pish” Minet, a guitarist providing all the additional bass, electronics, and drum programming turning Prohibition into a rigorously and increasingly addictive proposition. There is little we can tell you about the man behind the project, the Squidhead bio on the website dummy text, but seemingly the EP is Minet’s debut release whilst inspirations come from the likes of Meshuggah, Devin Townsend, Steve Vai, Morbid Angel, Fear Factory and many more. The music within the release is sculpted with 8 string guitars and forges modern death metal riffs and melodic licks, a description which does not quite do the whole adventure of the encounter justice.

For us any metal instrumental proposal comes with the fear of over indulgence and excessive showing off by the aural sculptor, hopes that there is not the creative fiddling which goes nowhere as it shows what a ‘clever boy’ the artist is. Though Minet is not slow in coming forward with his technical prowess and in the face shredding, it never really defuses the fluency of the songs, slipping into their narratives as any other aspect. Nor does it disturb the theatre sparked in the imagination, so our personal wants in instrumental explorations are provided for whilst those with a hankering for a fiddle or two will also be more than satisfied.

Opener Riding The Octopus dangles a sonic lure before ears right away; a tempting swiftly reinforced by aggressive riffs and agitated rhythms. It is an immediate heavyweight proposal

which relaxes a little for the magnetic fret work of Minet, though it still retains a seriously predacious air. All the while though there is a dramatic intimidation which constantly prowls the track, even as mystique kissed melodies and acidic grooves show their spicy proposals, a skilled blending of extremes within a track which already has thoughts lost in a realm of fantasy figures and occultist bred minatory escapades.

The following Edge Of Consciousness is bred from the same dark shadows as its predecessor, riffs snarling and menacing as rhythms descend with hostile tenacity. Across both songs you can hear those Meshuggah/ Devin Townsend like essences whilst Minet veins and lights the portentous canvas of the track with sizzling sonic flames which as inventive and impressive as they are, never stay too long in one design to feed expectations or temper the unpredictability flavouring the tracks.

The strong start to the EP is taken to stronger persuasion by the outstanding title track. A sinister devilry comes with the opening dark throated bass coaxing and percussive shuffle, expanding as bestial riffs align to the flamboyant tones of guitar. It is the swing behind the song though which steals the passions, a contagious swagger which spines the whole piece of music. From this all the other enthralling additives hang and dance, whilst imagination wise both track and thoughts collude in a dark seduction full of salacious temptresses and demonic flirtation; well that is what emerged in our fantasy and that is another beauty of the release, each track inspires visually potent exotic emprises.

The EP’s best track makes way for the more ethereal atmosphere of Coded Dreams, the song exploring a post rock/progressive landscape regaled with melodic blooms and sonic elegance. The rhythmic side of the track is an unsettling and threatening provocateur but remains in the shadows as the brief but mesmeric track warms ears and air.

Prohibition closes with The Ritual, a devilish fusion of rabid riffs and unrelenting beats within a maelstrom of guitar enterprise and at times espionage as with relish it twists and turns to take ears and imagination on a spiral of fascination and danger. It is an impressive end to a thoroughly enjoyable release. The EP could be said to be offering little new but when ears and pleasure are only wanting more it is a quibble to easily dismiss.

The world of Squidhead is a mysterious adventure and sound-tracked by a rather enjoyable debut. Anticipation for its successor starts here.

Prohibition is available now digitally and on CD @ http://thesquidhead.bandcamp.com/