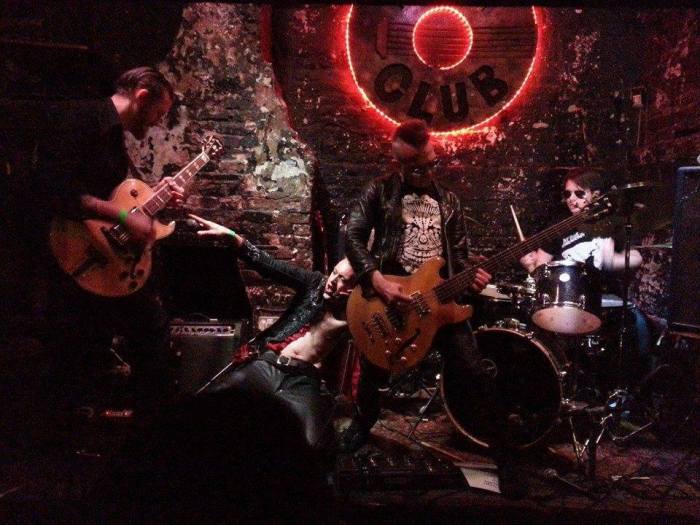 Still fresh from infesting our psyche with 7” single Invasion Of The Spiderqueen, Britain’s warped rock deviants Dick Venom & The Terrortones return with the just as salaciously compelling The MonsterPussy Sessions. The new EP provides five tracks of juicy sex encrusted rock ‘n’ roll soaked in the inimitable flavouring distilled and increasingly spiced by the Nottingham quartet. It comes with a new breath of individuality too, a stronger uniqueness which twists the inspirations from the likes of The Cramps and The Stooges into a richer vein of their own distinctive carnal devilry; quite simply it is the band’s finest slice of dementia yet.

Since forming in 2010, the band has been drenching audiences in live sweat and juices across the UK, recruiting eager bodies to their mischievous stomp of psychobilly, garage rock, and old school rock ‘n’ roll. Sharing stages with the likes of The Meteors, Bad For Lazarus, Demented Are Go, The Radiacs, Vince Ray & The Boneshakers, and Vince Ripper (ex-Alien Sex Fiend) has left a lingering mark just as their own one of a kind shows and releases. The RockinRollin VampireMan EP was the first to play havoc with morals and bland music followed more recently by Invasion Of The Spiderqueen. Now with a line-up of Wrex St.Clair and Dusty Vegas alongside the frontman, the band unveils an even more potent case of rascality and mischief upon the imagination for equally increased rewards.

Valley of the AlleyAlligator Girls sets things in motion with a blues kissed flame of guitar coaxing and swiftly joining enticing rhythms, each a sultry lure on their own whilst together a captivating bait ready for the magnetic vocal

prowling of Dick Venom. There is an immediate swagger to the song that recruits an instant appetite for its striding temptation and sex tinged horror kissed lyrical narrative. There is the heated and commanding stroll which is to be expected from the band but also a thrilling fire of a solo and a rhythmic shakedown into the song pointing to a new breath to the songwriting and aural tempting of the band. It is a masterful feet recruiting and passion igniting start to the release which is straight away backed up by next up BellySlam City.

The second song boldly walks in with its own individual striding and ear provoking incitement. Beats pounce with an eager reserve whilst the guitar offers an almost stabbing enticement amidst the rolling bassline. It is a simple but potently persuasive romp with the warped colouring of the band oozing from every limb igniting twist and creative shrug of its old school shoulders. Like Gene Vincent meets Lux Interior with The Pirates serenading both with trash rock revelry, the track seems to bask in the lustful hunger shown for its raw charms before making way for the dark seductive spicery of Crypt Tonight. Bass and rhythms throw out a net of rock ‘n’ roll shadows with virulent hooks whilst Venom canters over its canvas with his pouncing syllables and lustful expression. Again a garage rock blues bred toxin plays pleasingly with senses and thoughts as the release shows more of the richer maturity and diablerie coursing through songs.

The delicious garage/surf rock tempting of Dead DeadBeat Delinquent teases and thrills ears next, its prime hook an irresistible breeding of addiction to which fire cast riffs and dangerously hypnotic rhythms prey. It is a glorious roar of punk ‘n’ roll driven deeper into the passions by Venom’s bracing roguishness. The best song to come out of the band, certainly recorded, the track leaves psyche pumped and energy aflame ready for the closing No Good To Get Up To. The track seemingly is driven by its predecessor too, it’s thumping beats and high kneed entrance an agitated enticement of contagion and hot creative juices which spill into washes of sizzling soul infused squalls. The impressive burn of a track brings one exceptional release to a mighty and mouth-watering close.

Though there can never be another to rival The Cramps, it has not only been us who have thought Dick Venom & the Terrortones had the potential to be the British equivalent in potency and influence of subsequent sounds and artists. There is a long way to go before the band reaches those heights but The MonsterPussy Sessions shows that the possibility could definitely be a reality if further great impressive steps are continued.

The MonsterPussy Sessions is available now digitally and as a ltd edition cassette on Jailhouse Morgue Records @ http://terrortones.bandcamp.com/