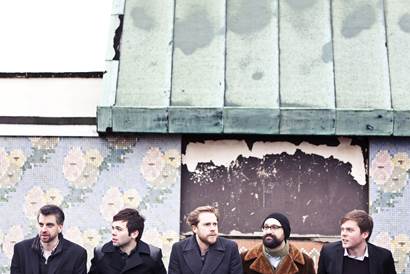 Missing the coach the first and second times our introduction to Scottish melodic ‘emoteurs’ Broken Records came with the recently released Toska EP, a release which to be honest underwhelmed despite the impressive craft and ideation oozing through it. This made anticipation for the band’s third album less than enthusiastic but it has to be admitted that Weights & Pulleys makes a more than solid convincing to open up understanding as to why the band is so well thought of. Definitely the album does not light any major fires in our thoughts and passions but a smouldering attraction it certainly makes, one very easy to recommend to fans of the band and of the likes of Doves, Sigur Ros, and Arcade Fire.

Formed in 2007, the Edinburgh band was soon teasing in attention with their folk/indie bred textures and dense emotional enterprise, their first release the ‘gig’ EP inviting plenty of attention and excited praise. As they refined their sound the band successfully shared stages with the likes of Idlewild, Sons & Daughters, and Editors across Scotland before a series of singles including the first, If the News Makes You Sad Don’t Watch It on Young Turks in 2008, saw the band covered in acclaim from all areas of the media and led them to signing with 4AD. The following year was the canvas for acclaimed debut album Until The Earth Begins To Part and the continuation of highly praised shows and festival appearances. The Out On The Water EP also made its appearance at that time whilst 2010 saw the band line-up change into the sextet of Jamie Sutherland (vocals, guitar), Rory Sutherland (violin), Ian Turnbull (guitar), Dave Smith (piano, trumpet), Craig Ross (bass), and Andrew Keeney (drums), and the supporting of bands such as The National and Freelance Whales, as well as second album Let Me Come Home to again intense recognition and support. Three years in the making Weights & Pulleys is the ‘return’ of Broken Records and it is hard not to expect it to be swamped in the same accolade of acclaim as its predecessors from varied and wide quarters.

moves on from the earlier Toska whilst seemingly continuing its evocative intent. Why the album is a bigger impacting persuasion than the previous four track release is hard to exactly say but it feels like a bigger picture is explored and unveiled rather than mere scenic glimpses as offered by the EP. Also without finding major fuses to raging fires, there is a new spark to a great many of the tracks which captivates and intrigues whilst simultaneously finding an almost anthemic lure to entice senses and emotions. Opening track Ditty (We Weren’t Ready) is a fine example, its thick hypnotic rhythmic coaxing irresistible bait within an emotionally intense melodic swamp. Vocally Jamie Sutherland roars with expression and emotive endeavour, his call cradled in soft but incisive sonic arms and eventually an orchestral caress which equally fires up the senses. It is a richly potent start raising a keen appetite for things ahead, a hope soon sizeably fed by the Springsteen/Petty-esque Winterless Son. Again the rhythms grip attention as they thump out their intent seemingly spurring on the heart of another impressive song.

Toska steps up next and as on the EP fails to entice any real power to reactions even though it is a satisfying and accomplished offering. Sculpted around an evocative narrative of keys, the song merges melancholic breath with an invasion beauty, hope and reality meshed into one dramatic scenario. Musically the song is almost mesmeric but that trigger to light up the passions is a dormant factor, though awake once more with So Long, So Late. Across the release thoughts of fellow Scots Letters and also for less open reasons Josef K emerge with the richest suggestiveness coming with this fully immersive slab of emotional intensive and melodic fire wrapped in drama drenched shadows.

The title track envelopes ears and imagination with a full and heavy incitement of emotion and reflection, a consuming weight of drama and thoughtful provocation which easily pleases if without stoking that again simmering fire in the belly of the album and listener. That poke is provided by the excellent Let’s Call It A Betrayal, an agitated revelry of rampant rhythms, dark throated basslines, and sonic imagination ridden by the persistently impressing vocals. The track tempts, challenges, and simply hits the instinctive provocateur in us all, heights of dramatic expression and melodic dispute walling in the passions.

The following track, Instrumental is just what it says and makes little impression though you appreciate why it is included as it gives a breather within the torrential emotional deluge of the release. The enjoyable You’ll Be Lonely (In A Little While) strolls into ears next with a rhythmic swagger and melodic drizzling which undeniably enthrals but ultimately it is the rhythmic lure which makes the only lingering impression.

The unapologetically emotional Nothing Doubtful comes next to again absorb ears and thoughts. Its opening body and tone has a dulled and shadowed breath, a mono like air which brews up a riveting cloud of intensity before breaking into the light and expanding its full heart and stereo spawned grandeur with delicious flames of brass. Much like the album the song is a slow burner which only impresses more with each encounter to maybe not steal the passions but certainly give them a big nudge.

The album is completed by the folk bred I Won’t Leave You In The Dark and finally All Else Can Just Wait. The first of the pair makes a controlled but keen entrance, that folkish lilt to sound and vocals painting a narrative until the song erupts into another seemingly Springsteen seeded premise but with tantalising sixties pop toxicity carrying a definite sense of The Walker Brothers whilst horns again just excite. Its successor is a slow brooding ballad with a great mix of vocals and pleasingly nagging repetition to its melodies, it all working towards a climactic finale which never really materialises. It is a decent enough end though which like the album gives plenty to make a compelling encounter but not enough to make its case as a constant playlist contender.

Nevertheless Weights & Pulleys is a captivating proposition which will light up the ears of fans and draw a wealth of newcomers with its collection of skilful tracks which combined show just why Broken Records is so highly thought of and at times offer evidence that the band just might have the potential to help reshape British indie rock.