Turning the air into a whirling dervish of sonic antagonism and invigorating confrontation, Paradigms the debut album from Irish technical death metallers Dichotomy, is an introduction not to be taken lightly. The eight track tempest of skill and aggression instantly sets the Dublin quintet as one of the most formidable emerging predators within European metal. Veined by acidic melodic enterprise which leaves breath a rare commodity and superbly crafted intrusive riffing offering intensive but welcome scars the album is a scintillating piece of creative corrosion that marks the band as a dramatically promising and already accomplished force.

Formed in 2010 by guitarists Rats and Andy Kealy with the idea to merge the technicality of death metal with the groove and defined essences of other genres whilst feeding off the inspirations of bands such as Death, Necrophagist, Gojira, and Opeth, the band was soon making a strong impression in the Irish underground scene. With vocalist Kev O’Connor and drummer Dave Fay alongside the pair, Dichotomy was an immediate attraction and with a line-up soon completed by bassist Neil Coburn the five-piece was earning an intense reputation for their live performances and scintillating sound.  Recording their first release in the summer of 2012 at the esteemed Westland Studios in Dublin, Dichotomy is set to extend their success over the widest arena with the unleashing of their self-released beast of a record. As brutal and seductive as you could wish Paradigms is set to enslave the passions of legions of new followers one suspects, certainly leave them basking in its annihilatory wake.

The album opens with the brief instrumental Empyrean, the tender guitar led piece giving no hint of what is to follow in sound or 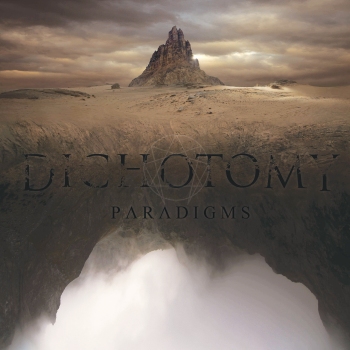 intensity. It is a nicely composed welcome but to be honest underwhelming, certainly in hindsight once The Sentient Oppressed opens its jaws of aural fascination and technical manipulation to sucks senses and thoughts into its heavy consuming heart. From the first seconds riffs are scrubbing the surface of the ear whilst mini grooves tease within the brewing wounds. Compounded by the hard fisted rhythms of Fay it is a startling trap eagerly devoured and explored by emotions. Into its textured depths with the vocals of O’Connor scowling with a squalling maelstrom of malevolence, the guitars of Rat and Kealy parade incisive flames of melodic venom and sonic toxicity to ignite further satisfaction whilst the Bass of Coburn prowls and adds greater shadow to the contagious blaze, though there are moments here and through the album where he sinks within the thick assault to be a presence rather than a strong flavour though admittedly making up for it when he is coaxed with clarity.

It is a staggering full start which as the album evolves its temptation only gets better. Both All-Seeing Eye and Polarity have emotions grinning broadly, the first expelling a torrent of vocal causticness over a deliciously niggling sonic guitar persuasion and the unbridled and exhaustive rhythmic barrage of Fay. Like its predecessor it is an immediate titanic lure before which defences crumble and hunger takes on predacious heights to match the intensity and creative greed of the song. The song mixes up a fluid unrelenting attack with mighty swipes at the senses brought by concrete riffs and steely beats crossed by the sabre like technical invention and flames of the guitars. It is a thunderous pinnacle swiftly matched by its successor. The song is a more deviously considered encounter, a rapacious pack like approach from the songwriting and sounds challenging the ear and beyond in comparison to the tsunami savagery of the previous track but not lacking in the artillery to flatten walls and doubts before letting the bewitching guitar play and imagination to scorch the debris.

Vocally O‘Connor deviates very little from his core delivery but where others may push limits and patience, here it works as another bestial string to the creative bow and ruinous sonic resourcefulness, the voracious No Catharsis the next destructive proof. Once more the guitar work is a tantalising almost bewildering furnace of pleasure and open ingenuity caged by the most vicious and explosive rhythmic avalanche of venomous skill and rapacity. Mere words cannot truly relay the potency and power of the song, or release come to that, but it powerfully confirms the earlier suggestion that the release just gets zealously better and more impressive, this song taking top honours on the album closely badgered by the likes of the primal Covenant of the Foresworn and the evocative instrumental Alea Iacta Est, a piece that unites beauty and a sonic beast for an enthralling and imagination lighting narrative.

The senses burning malefactor Of Strife Of Discord completes an exceptional and intoxication debut from Dichotomy. As savage as it is aesthetically wondrous, Paradigms simply declares its creators as one of the most exciting new antagonists to widely hit European metal this year.