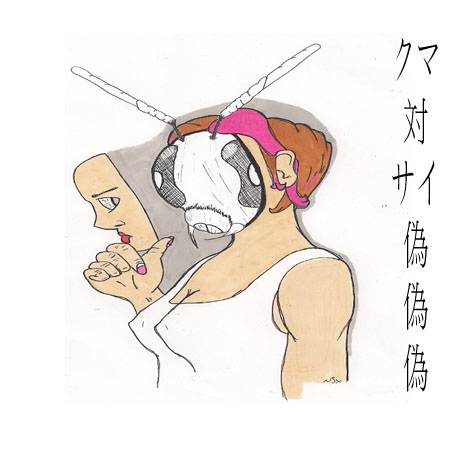 Ahead of a new EP due later in the month we thought we would look at the Fake Fake Fake EP, the debut from UK band Bear VS Rhino and a three track confrontation which will not be for all but one that offers something compelling for hunger of all things discord corrupted and noise bred.

Its creator is a trio from London consisting of drummer Nico, Italian bassist Carlo, and guitarist/vocalist Markus who the bio for the band says occasionally sings in Greek. Though classed as an alternative rock band, Bear VS Rhino seemingly spawn their sounds from post punk and whereas their influences are listed as the likes of Biffy Clyro, Mogwai, Queens of the Stone Age, Lou Reed, Tom Waits, Deftones, and Neutral Milk Hotel, we can only suggest that you imagine a raw obtuse mix of The Fall, Marc Riley and The Creepers, and Swell Maps to really get a flavour before taking a bite into their tempest of noise.

Opening track Useless enters on a drunken swagger with toxic sonic fumes laying their breath upon melodic discordance and vocal disharmony. It instantly strikes up thoughts of early Mark E. Smith and co, the track a cross between Rebellious Jukebox and Bingo Master’s Break Out. If that is a sound not raising the juices already, then step away from the vehicle as song and release only delve deeper into that caustic aural dissidence. Catchy and challenging the track is a richly pleasing introduction, the guitar scraping the surface of the senses for the rhythms from drums and bass to punch and gnaw on respectively, but at the same time breeding a seductive temptation which recruits thoughts and passions wholly.

The following Daisychain has to wait whilst the band struggle to find its body but once given ignition it taunts the ear with a punk vocal snarl over an aural disunity and testing that lures in and sees off mind and emotions simultaneously. There is a strong song trying to escape from within but not given the opportunity, though again there is enough bait to makes you want to return and know more.

Final track Linseed Oil returns to the same breeding ground as the opener, guitars carving an anarchical web driven by the up and down vocals as the bass prowls alongside with throaty menace. Sparking good reactions and again an appetite for more it would still be fair to say that track and EP is for a limited audience, though it also suggests a promise of adventure which makes the impending new release one needing to be investigated. Basically for all fans of the references we mentioned above…not much else left to say.