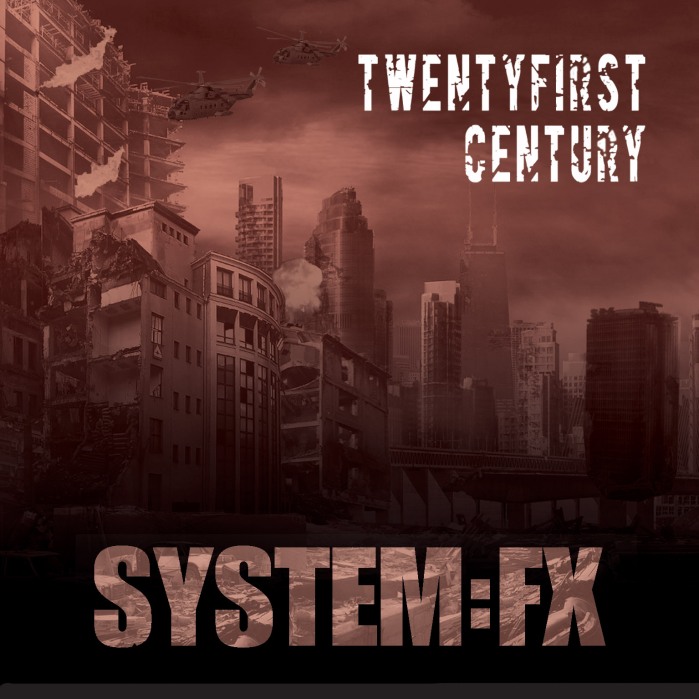 Twentyfirst Century, the third EP from UK industrial antagonists System:FX, is one of those releases which as it ravages and enthrals the ear feels like it is standing astride the senses with a sledgehammer of sound and wash of melodic animosity. It is a collection of colossal songs which seem to come at the body and those beleaguered senses from every angle and through every pore whilst treating the bruising with invigorating and refreshing radiance. Already used to strong acclaim upon their steady and rapidly ascending rise the London duo have taken their sound and stature to another level with the new EP, giving it a spite and anger that provokes from start to finish whilst unleashing the most potent rewards.

Formed in 2011, System:FX has already set stages alight alongside the likes of Panzer AG, 32Crash, DAF, Client, Implant, Grendel, Assemblage 23, Nitzer Ebb, Combichrist, Leaether Strip, Uberbyte, Inertia, Deviant UK, Cybercide, Crash Symptom and many more, each performance adding to their increasing reputation. Last year saw the band playing Resistanz 2012 as Phil Barry’s (Be My Enemy, Cubanate) live band whilst this year at the same event their new EP felt the hunger of fans as they clamoured for its purchase, something which is going to be emulated one suspects as the release works its way into the passions and psyche of not only the UK industrial scene but the world. Consisting of Steve Alton (vocals/guitar/programming), who recently also linked up with Fredrik Croona in the latter’s project Cynical Existence, and Debs (drums/backing vocals), with the band expanding to a trio for live performances, System:FX go for the jugular with Twentyfirst Century, its sinew driven body of sound and the lyrical/sonic intensity inspired by the disappointment of adult hood and seemingly seeded in the memories of the London Riots, clenching its jaws around the throat of the senses and thoughts never relinquishing the grip until the last note has seared its imprint into place. No mercy is given, or wanted when a release sounds and feels this good.

Surrounded by the dissident calls of the populace opener Vengeance courts the ear with scratchy guitar and equally blister electronic lures before exploding into a storm of thumping hungry rhythms awash with deliciously fiery melodic bait. It is an instantly hypnotic temptation, its touch a barracking intensity on the senses but accompanied by a colour fuelled seduction which ensures any discomfort is a prize worth taking. Just as passions and thoughts have no resistance to the intensity and empowering provocation of the song, limbs are mere pawns to the heavy trodden dance beats and the epidemically compelling sonically sculpted enticement. It is a maniacal puppeteer leaving a breathless and fully satiated victim in its undertow.

The following Fire, skirts around the ear initially with a scattering of sonic steps punctured by muscular strokes before letting the intensity off of its rein to prowl and intimidate. With samples adding further menace and intrigue the track is a rapacious journey through the shadows and blackest corners of society, its Prodigy like urgency and punk toxin aided by the snarling vocals, a belligerent poison to the seemingly warm electronic embrace. Though not as impossibly addictive as its predecessor the track is a thoughtful imagination spiking treat which evokes and narrates its intent superbly.

The title track like the first brings the sound of streets in turmoil to the ear to compliment the rigorously persistent start of worrisome electronics and riffs framed in unbreakable rhythmic caging. Danger and unrest stroll hand in hand with the pulse bursting stomp of the song whilst the sonic heat rinses the air of the song in impacting and emotively inspired imagery, helped by the continuing samples of sirens. An intensive imposition on apathy and assumptions, the track is another weighty tempest to capture the appetite before handing over to the closing red alert of Stay In Your Homes. With samples of martial law declarations punctuating the thrilling start, the track pulls to its loftiest heights on the EP and proceeds to oversee a nation in self-destruct with a rain of sonic mercury and melodic acidity falling upon a web of rhythmic and bass toned predation. It is a stunning finale of corrosive imagination and commentary leaving the body and mind exhausted but fulfilled.

Twentyfirst Century is a devastatingly outstanding release which only gives a ‘complaint’ to its briefness of just four songs, but episodes which confirms System:FX as one of the most exhilarating bands in the UK. Roll on an album is all that is left to say.