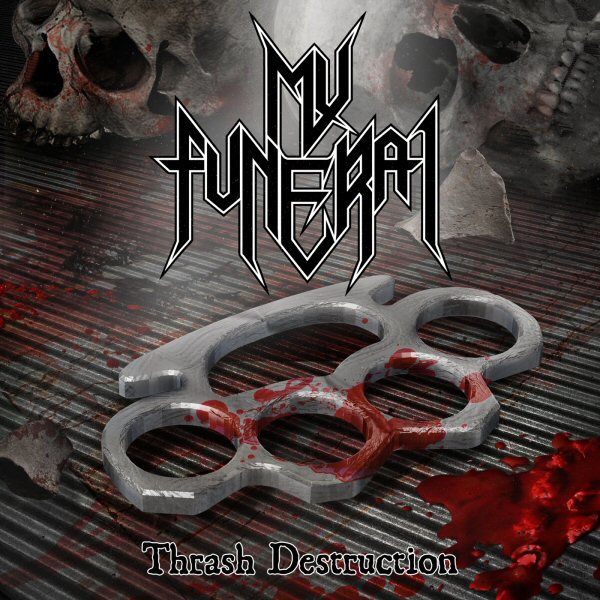 The title of the new album from metallers My Funeral tells you all you need to know about the band and Thrash Destruction itself. A riotous and aggressive no holds barred rampage of ear worrying, senses battering ferocity, the second album from the Finnish quartet does and delivers exactly what it says on the tin. Released through Violent Journey Records, the album has no real desire to craft new boundaries or investigate never before discovered areas of metal, but for a raging uncomplicated and pleasing onslaught of hungry riffs and merciless rhythms it holds all the weaponry and goods to satisfy.

Consisting of vocalist and bassist Ilkka Sepponen, guitarists Joonas Kiviniemi and Aku Korhonen, and drummer Hannu Sivusuo, My Funeral use open influences of bands such as Slayer, Kreator, Exodus, and Death to inspire and flavour their own invention, the result a sound which whilst lacking an unique voice still unleashes enough to make the band one which provides enough feed to quench the appetite for prime thrash metal. The songs and lyrics of Sepponen are strong and punchy with their delivery potently accomplished and stylish, and though the album may not ignite burning fires in the passions, it and its songs  more than stoke up the hunger to return to the release on a regular desire.

There is no pissing around with scene setting intros or slights of aural hands with sonic flourishes as on a regular diet of releases it seems nowadays, My Funeral simply go straight for the jugular with Into the Fire, riffs and rhythms savaging the ear in an adrenaline charged rampage from its very first second. Immediately infectious with the drums driving things hard and fast through the ear whilst the riffs and sonic teasing of the guitars leave their welcome scars, the song is a potent start with a vein of invention and variety to its gait and attack which leaves one greedy for the rest of the release. The caustic scowls of vocalist Sepponen admittedly take a while to acclimatise too, something which does creep up on you a few songs in, but other than that minor niggle the track is a rousing introduction.

The following likes of Thrash Winter, the excellent persistently badgering Manhunting Season, and the bruising Alcoholic Madness bring further ear catching and well-crafted tempests of classic/thrash metal, the third of the trio especially punctuated with heavy metal honed flames of riveting guitar enterprise within the torrential downpour of raptorial riffs and bone splintering drum rallies, not forgetting the ‘drunken’ brawls of group shouts. As mentioned there is nothing going on to open new doors but why bother trying when the party is burning fiercely already.

Satanic Black Magic with its incendiary contagion and blackened corners is a head above the parapet major highlight of the album and a song to loudly share the variation and imagination at work within the songs despite their largely formula gaits, whilst others such as Killing Spree with its insidious groove within senses annihilating intensity and barbarous riffing, and the flesh peeling acidity of the sonic insistence of Slay them All stand tall and intense within their own virulent confrontations.

As the title track offers a final gratifying scourge, the over-riding emotion is of enjoyment and breathlessness. Yes the band and album may not be providing new feasts to gorge upon but they still inspire an on-going invitation to share company.