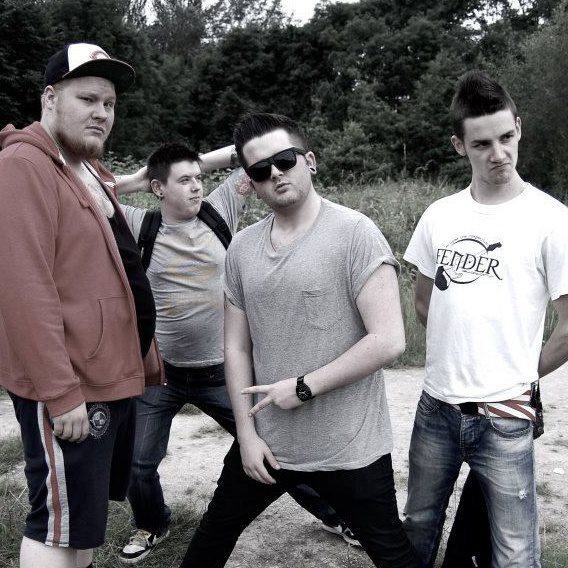 If you are looking for niceties and sophisticated music to relax to then give UK punks Dead Retinas a wide berth as they only deal in abrasive antagonistic rock n roll which leaves you enflamed in attitude and sonic aggression. Earlier in the year the band impressed with their debut EP Dead Retinas vs. The World, the release a grazing and fiery treat of unbridled infection and invigorating adrenaline driven punk rock, but was a mere teaser for their mighty follow up, Dawn Of The Dead Retinas EP. Their debut left one fuelled by anticipation for what was to come from the Manchester quartet and they have those expectations not only quenched but seeming quite inadequate as an assumption now that the band has unleashed this sensational EP.

The first thing the release does is bring thoughts of The Dickies to mind simply from the titles of their two EPs, the band taking inspiration from movies just as the Americans did early on and both with a mischievous glint in their eyes. Musically though, despite both stirring up the senses with instinctive punk rock, they part company. Whereas the LA band were arguably the first pop punksters, Dead Retinas bitch slap the ear with a sound which is like brawl between Pinhead Gunpowder, Cancer Bats, The Hives, and Dead Kennedys. It is an irresistible brew which offers diversity within a uniform of middle finger defiance and tongue in cheek antagonism. Since forming the band has corrupted stages alongside the likes of Four Short Of A Miracle, Landmarks, Falter, The City Divided, Zsilent Z and many more, and all the time have been emerging as one of the most refreshing and promising punk bands around, the new EP only deepens that acclaim whilst showing the band is evolving and maturing as songwriters and musicians all the time and well on the way to being to the fore of UK punk.

Consisting of three tracks, the EP pounces on the ear drum with venomous spite and aggressive energy through LSD, a track 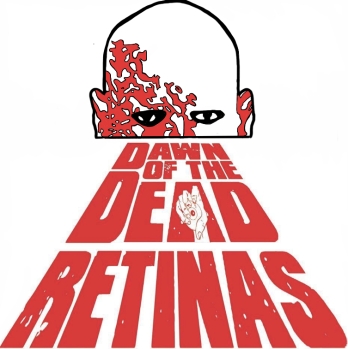 showing invention and psychotic imagination. It is a delicious psyche bruise which twists and turns into a bedlam touching sonic confrontation, an irrepressible captivation from start to finish. The song enters on grazing riffs, predatory bass leers, and thumping beats pounced upon by the coarse squalls of vocalist Sam Hendo. The track soon settles into a ferocious yet restrained form of sonic combat with Sex Pistols hooks from guitarist Jack Thompson latched to his ear scouring riffs and senses gnawing basslines from CJ Smith, the pair with Hendo combining for an anthemic gang shout chorus. It is a great rampage which is elevated further when the track slips into psychedelic tendencies soaked in a classic rock solo which loses sanity turning into a synapse scorching sonic acid. It is a ‘painful’ end which completes an outstanding song, though it is eclipsed by the even greater presence of Just Because You Drink Jack Daniels Doesn’t Mean You’re Rock and Roll.

The track is a fusion of psyche, noise, punk rock, and quite magnetic. Immediately the song is confronting the ear with a snarling bass, scything riffs, and the abusive rhythms of drummer Lee O’Connor which never let you off the hook from start to finish, those bass growls of Smith an eager devilish companion. There is a slight bluesy lilt to the guitar as Hendo sets one up for a fall with malevolent chuckles and challenging tones questioning the listener. With additional Dead Kennedys like riffs and the twin barracking of drums and bass the song just ignites rapture for its compelling sounds. With also a mix of Kabul Golf Club shagging Gallows to its breath, the track is a glorious riot of energy and sounds which fires up even greater expectations of the band ahead.

The release is completed by Swarm The Decks, an incendiary merger of enslaving rhythms, raw erosive riffs, and a scrap of vocals from all three vocalists. Like a quarrel with the Beastie Boys and Discharge it is an in your face agitator which without the contagious lures of the other pair still pulls up an equal satisfaction through its combative and challenging intensity.

You always expect and hope a band will improve release by release but Dead Retinas have taken big steps on from what was a strong and vibrant debut with Dawn Of The Dead Retinas. For all punk rock fans the band is a must.