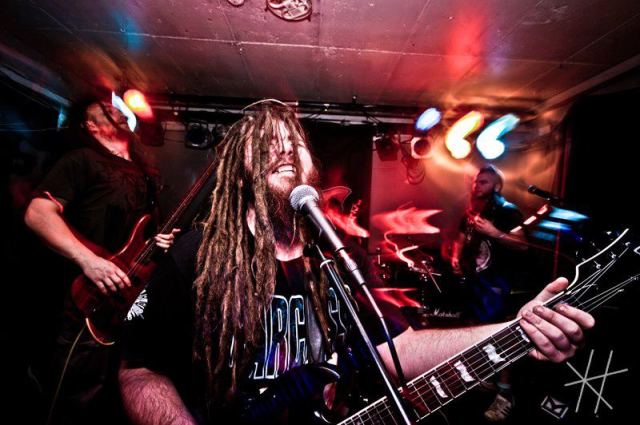 With their debut album in the works a look at the first EP from Irish metallers zhOra is definitely the order of the day especially as it is a rather impressive slab of intense muscle. The Feet Nailed to the Ground EP was released earlier this year and makes a formidable and deeply promising introduction to a band which formed just the previous October. It is an accomplished and skilled confrontation with an intensity and power which has the senses cowering whilst basking in towering riffs and melodic incursions.

After forming the Clonmel quartet of guitarist/vocalist Colin Bolger, guitarist Pancho O Meara, bassist Richie McCormack, and drummer Tom Woodlock, spent two months working on the trio of songs which make up the EP, the evidence of that concentrated time and endeavour in creating the songs easily audible on the release, each sinewy confrontation a defined and eventful engagement bearing the fruits of honed musical thought and passion. January of this year saw the band enter the studio with Ben Wanders at Nebula Studios Limerick and what emerged is a release which fires up the imagination as well as keen and strong expectations and anticipation for the band and its future offerings.

intriguing and refreshing pervades. The song moves into a stalking yet inviting tempest of acid sonic invention and badgering basslines framed by firm rhythms next whilst the vocals bring an additional menacing graze to the intimidating and compulsive storm spreading its inspiring consumption. It is a tremendous start which cements those initial thoughts and lights the first sparks of what becomes a zealous greed to hear more of the band.

Second track The End Of It All begins by unleashing carnivorous riffs and jabbing rhythms to make a contagious canvas for the flames of sonic blistering and spicy grooves which permeate the expressive charged energy. You could arguably say the band is not offering anything openly innovative but as the first two songs show zhOra have a creativity soaked in something different and not easy to define but certainly sets them apart.  Starting as a stomping riot of insatiable riffs and synapse chewing intensity, the song evolves to one with a slight ‘progressive’ breath to its latter presence whilst retaining the hungry and combative heavy growl of the song. Vocally and musically the band hits the spot, the gravelled gruff tones of Bolger a bruising rub which lie perfectly within the sonic mastery at work making a union which agreeably grates whilst dangling a magnetic lure with ever shifting adventure and direction within songs from the guitars and rhythms.

Final song Through The Valley is the perfect example of that tempering between and combination of gaits. The track makes its initial entrance upon an emotive atmospheric shimmering before building to a stomp of chunky riffs and chugging persistence speared by fiery sonic vice from the guitars and raptorial bass lines. The song is an evolving beast vocally and musically which just ignites the imagination further and leaves one drooling with ever brewing adoration. Probably the most inventive of the trio, the song is a wonderfully unpredictable passage of ideas and creativity which offers a little extra with every engagement taken.

The Feet Nailed to the Ground EP is an impressive attention grabbing debut from a band which is surely going to move on to great things. The songs on the release are skilled, thoughtfully crafted, and an intimidating aggressive assault which just thrills and leads one to bear a strongly growing impatience to the wait for the planned album from zhOra.

It may be only of three tracks but the debut release from US doom sludgers Boneworm is a formidable and epic encounter which gnaws away at the senses and emotions whilst rewarding them with something with an originality which is almost intangible yet openly enthralling. Whether it can be called an album or EP is immaterial, the fact that it is a bruising caustic soundscape split into three distinctly different but equally compelling light sapping descents into doom clad realms of the highest order, the only thing of relevance. It is an exhausting journey which is at times as brutal as it is perpetually magnetically absorbing and compelling.

From Portland, Oregon, the trio of guitarist Tim Burke, bassist Dave Becker, and drummer Chaz Rocker, create landscapes of burdensome intensity which inspire rather than deplete ones energies though they are masterful in dragging one into sonic wastelands borne of a crumbling and devastated existence. Musically the heavily soaked heart of the songs bring the persistent heat of sludge metal to bear on the Cascadian cast doom breathing loudly throughout, with additional flames of seventies psychedelia and classic rock to inflame fires, though they smoulder and blister rather than emerge as full rages.

Sickness opens up the album and slowly evades the psyche with its melodic grazes which crawl all over the senses like sonic leeches, bleeding out and sucking up last remnants of hope and light. The challenging vocals soon join the affair, their equally ponderous energy bred from the same seeds as the sounds, to effectively add aggressive weight to the climbing intensity. Heavy though the track is, there is plenty of raptorial melodic enterprise from the guitars which align themselves to the carnivorous titan riffs for a constant captivation, the grooved and sizzling uncluttered manipulations as infectious and masterful as the tracks are ultimately erosive.

The deeply impressive start continues into Crater, a track which without moving too far away from its predecessor unveils a caliginous presence to offer open evolution to the overall stance of the release. Despite its darker tones evoked by the smothering rhythms and outstanding corrosive basslines, the track brings temperance to its shadows through transfixing guitar conjurations. They are shimmering yet caustic caresses of seductive wizardry coated in seemingly insidious intent. The track does not ignite the same passion within as the first but equals its height in stature and sinister grandeur.

Closing upon the primal eloquence and unforgiving encroachment of The Call, the release is one which only spores strong attraction its way such the craft and immense emotive depths which wrap themselves tightly within. Like the final track which is a chilling lingering embrace taking an eternity to expand the  whole of its deliciously torturous expanse seeping potent venom, the album leaves one gasping in satisfaction and throbbing involuntarily from the salted abrade offered. It is an excellent release which brings something notable and new to doom/sludge metal, something which truly excites now and in regard to the future.

The name your own price purchase of Boneworm can be found @ http://boneworm.bandcamp.com/

A sonic quelling of the senses which leaves a kind of disorientation in its wake, the self-titled debut album from French black metallers Void Paradigm is one which certainly sparks the imagination and leaves an intriguing want to delve deeper into the band and their dark evocative sounds. The album is not the easiest of listens or the most comfortable of experiences but as an evocative encounter it is an ultimately very satisfying confrontation.

Released via Trust Records, the seven track intrusive sonic grapple upon the senses is a violent and seemingly bedlamic confrontation brought with open skill and inventive intent. The songs interestingly do not stray far from areas heard before but equally offer a new and magnetic presence crafted with imagination and finely layered textures.  Consisting of vocalist Jonathan Marquis Thery (Ataraxie, Funeralium, ex-Hyadningar and Bethlehem), guitarist/bassist Julien Payan (Yuck, Mhonos & ex-Hyadningar), and drummer and Alexis Damien (Pin up Went Down & ex-Wormfood); the Rouen trio have created a release which is a disturbing touch upon synapses with its Voivod influenced caustic abrasions.

The excellent Chao Ab Chao opens up the insidious conflict, its scorched and intense soundscape emerging from climax building

rhythms and serpentine riffs alongside acute melodic teasing, aural lime upon the ear. The combination is an incessant rub speared by the vocals squalls of Thery, his delivery borne as much from death metal as the blackened pits which spawn the sounds. The track proceeds to engage with accomplished urgency and an infectious groove which tempers the harshness elsewhere whilst offering an irresistible entrance to stronger creative nastiness. As mentioned earlier, you will not exactly find boundaries being threatened here but for provocative pleasure, song and release both stand tall amongst other releases with the same endeavour to their cause.

The following Fighting The Silence is a delicious acidic bitterness on the palate with another persuasive groove veining the tonal bruising and debilitating storm wrapping the whole conflict. Challenging for best song on the album, it is a tightly formed and adventurous expanse of sonic pollution gifted through unbridled passion which consumes and rewards with equal success. Impossible not to be absorbed by and enthused towards, the track is a masterful ravishment bringing varied flavours and styles into its corruptive tempest.

Not quite to the same effect or heights, Symmetrichaos and the title track both ensure the album continues to enthral and ask questions of emotions and thoughts. It is the other great peak of the album though which taking over from the challenging company preceding it seals the persuasion of the impressive presence of the album. Grabbing top track honours Building Cathedrals is an impacting and self-contained hypnotic journey moving from an emotive intimidating ambience through raw and brawling passions and crawling provocation on to rabid energies and hungry sweeping squalls fired in sonic discharge. It is a quite contagious track with spiteful yet thrilling grooves and lashing melodic hooks with barbed surfaces as destructive as the sprawling intensity.

Completed by the evocative instrumental Timeless Nothingness, a track which admittedly was an anti-climax to what came before, the album is a definite triumph from a band which you still feel is finding its way to creating something truly unique. If you are looking for something different in black metal, Void Paradigm probably do not exactly fill that remit but with an album which will bring a fresh and different aspect for the genre to thoughts and enjoyment, they are well worth your time and effort in checking out their offering.